On Saturday, April 23rd we had our first YPAD (Youth for Peace and Development) one-day service project in London. We were partnering with the STORM Family Centre in Battersea to work on their garden. They will receive a big amount of fertiliser and needed an area cleared and made ready for planting.

Marie Hanson MBE and her family really supported our efforts and two very friendly professional gardeners, Lou and Melissa, guided us during the day. Some of the UPF Young Achievers from several years ago attended together with Second Generation Unificationists and new friends. Margaret Ali, Tim Miller and Robin Marsh were the Universal Peace Federation staff.

The programme started with an orientation period with introductions, presentations and ice breakers. The icebreakers were led by Keldon Alleyne who was one of the first to receive a Young Achievement Award in 2010. Tim Miller outlined the 30 year backgound to the YPAD service project, namely the Religious Youth Service. Marie Hanson welcomed the group and informed the group of the role of the STORM Family Centre. Sagal Mohamed shared her experience of Ramadan which she was participating in at the time. There was also an explanation of health and safety issues related to gardening. 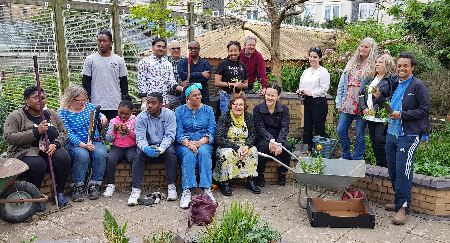 There were reflections and other presentations after the gardening was completed.

The purpose of the one-day project was to develop both experience and a small team who could be involved in later projects. The next project is planned for July.

We are grateful for all those who donated money during the Watford Fundraising Dinner to support these projects.