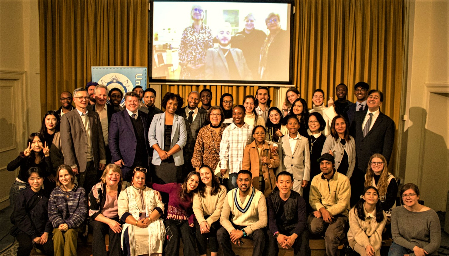 On January 14th the follow-up to the Young Achievers Awards was held in UPF – UK HQ, Lancaster Gate, over afternoon tea. It was a high-spirited event attended by many of the awardees from last year and some from previous years. Also attending were Dean Russell MP, Dr. Mike Balcomb, and Nathaniel Peat who all made excellent contributions to the programme encouraging the awardees.  (programme video here)

In the exchange of ideas with the young achievers, two future projects were identified. The first targets the rising levels of mental health issues in young people. The second project is the importance of education in the life of young refugees so they can stand on their own two feet and eventually help society besides helping themselves. UPF-UK will support these two projects with each project being guided by three Young Achiever Awardees and a few other young people who want to support.

Lee Keogh (video here) spoke very inspiringly about his desire to overcome all obstacles. He added that the mindset of someone with a disability is to fit into a world that is not made for them. He added that with resilience and a good attitude, he can help to educate others to do better to include people with disability.

Dean Russell MP (video here) gave an inspiring talk for the young achievers urging them to have a 10-year plan and look back as to how to fulfil it step by step. He saw the importance of Certainty, Community, and Creativity. He asked the young achievers to research what they enjoy and what they are best at by doing many things even if there are failures to learn from them in the process. He encouraged them to find a friendship group that is supportive of their personal goals rather than imposing other goals on them. Finally asking the young achievers to look at the world's problems differently in order to use their creativity to solve those problems in ways that may have not been tried before. He encouraged them also to research their heroes and role models in order to understand that they are also flawed people who overcame many problems and failures themselves. 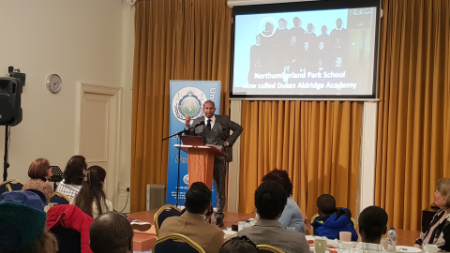 Nathaniel Peat, (video here) who is a former young achiever and UPF AFP. In an inspirational talk he spoke of his struggles growing up in a disadvantaged background to triumph over racial discrimination, low expectations from teachers and others while harbouring the desire to be a pilot. He spoke of his path of learning and then teaching others martial arts to finance his progress through A-Levels and University and obtaining his pilots license while some of his contemporaries died young. His engineering degree prepared him for establishing a series of companies including Gennex that seeks to empower others to become entrepreneurs. He has developed solar power panels that provide energy for poor households in different African nations among other products. His project Safety Box worked with a number of those who studied martial arts with him to reduce violence and reoffending in prisons.