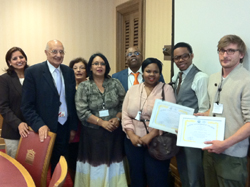 Fourteen young adults gave inspirational speeches about their activities and vision before receiving Youth Achievement Awards, in an event kindly hosted by Lord King of West Bromwich and organised jointly by the Universal Peace Federation and the Women's Federation for World Peace. Baroness Verma, one of several Parliamentarians to attend the event and present awards, said, 'I am so glad that I was here to hear your speeches today, and I will look in 10 years to see who among you has become a leader.'’ A participant later added, 'I would like to express my gratitude for the award yesterday. I think I speak for many when I say it was a very inspirational event. As one of the recipients of the award, I left the event yesterday with the motivation to continue striving in my endeavours, contributing to my community.' Six schools from the Stepney Partnership also participated, presenting an award to one exemplary family from each school. Ben Yeo, Project Manager for the Stepney Partnership, wrote later, ‘Big congratulations to six Stepney Partnership families who won an important national award at the House of Lords last night. The families received their award for the huge impact that parents/carers have had on their children’s learning and the wider community. The Youth Achievement Awards were organised by the Universal Peace Federation and included inspiring stories from young people across the UK.'  (Full Report Link) 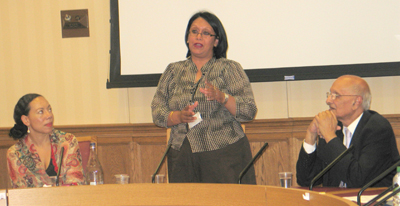 Tasif Zaman expressed a love for politics and formulating policy and his
community work with the Redbridge Youth Forum, Redbridge Youth
Council and the UK Youth Parliament. Most recently he has been developing the organisation ‘Aspire Youth Initiative’, of which he is the Founding Co-director. Tasif encouraged all young people to be involved in the Youth Parliament. He received the Youth Achievement Award from Lee Scott 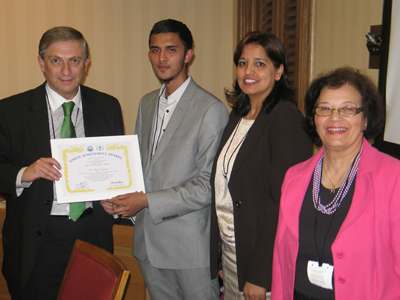 MP who expressed how inspired he was by Tasif’s accomplishments, his passion and involvement in politics.

Quince Garcia, receiving an award with Julien above, shared that he had spent a period of time in prison before he could turn his life around. 'Today the dream of managing a production company exists, amongst receiving a degree in film and animation and being honoured as an Ambassador of Peace. Julien and I have worked hard and patiently to organise what we are trying to achieve today and that is to set up a youth aid programme, called 1st Steps, to enable youths from the ages of 14 - 25 to gain a qualification in a key area of filmmaking.

Tolu Williams (photo below) has been an active volunteer for many good causes over the last few years including the anti knife crime campaign (STOP), and the Humanitarian Aid Relief Trust (HART). When presenting the award Nick de Bois MP said that he was ‘awestruck that at the age of 21 Tolu has done so much. She has inspired us with her attitude of living for others and has set a great example for us all. It was truly worthwhile to be here. I am immensely proud to have you as a constituent. Once again I would like to congratulate you. Really, really congratulations.’ 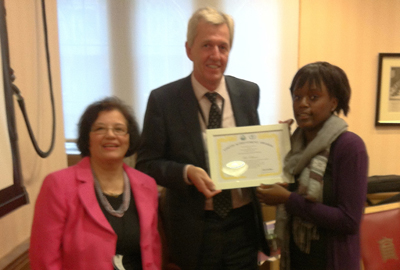 Patrick German spent a gap year with Youth Service International (YSI) and enjoyed it so much that he stayed for another year to have a longer experience of living in Africa.  He shared that his experience of living four months in Ghana had profoundly changed him and had given him the confidence to speak in front of the audience in the House of Lords. The project consisted of After School Programs, construction of the Discovery Centre (which YSI had begun last year), forums with youth on character development, and a trip to Mole National Park. You’ll be able to read a report from one of the team soon on the YSI Utrecht blog. The photos and report of his four months illustrate why a gap year service programme can be so character forming. Recipient of the Youth Achievement Award, Tara Love, (photo left) is an A- level student with a strong passion for advocating the involvement of women in politics. She is currently working toward the formal launch of her web-based project ‘girls-in-politics’.