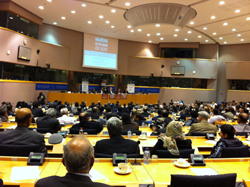 Commemorating the UN International Peace Day an event was held in the Universal Peace Federation (UPF) HQ in 43 Lancaster Gate on the 19th of September. A presentation on the efforts of UPF to support the United Nations in various initiatives, especially to promote dialogue between the different religions of the world, was made by Robin Marsh. There followed a number of contributions from the audience who came from many different faith backgrounds. Jack Corley, Chair of UPF in the UK, in concluding remarks spoke of the vision and continuing passion of UPF's Founder, the 92 year old Father Moon to build a peaceful world. Photo link 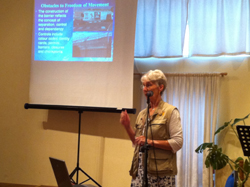 Freedom of movement is an essential right which is the basis for the exercise of other human rights, concluded the UPF South London conference held to commemorate the 20th annual occasion of the International Day of Peace. About 35 participants attended UPF’s event entitled “Building a World of Peace” on Saturday 17th September 2011 at the Peace Embassy building, Thornton Heath. The meeting spotlighted tensions experienced by Palestinians and the Sudanese and featured expert commentaries from speakers with first-hand knowledge of the situations on the ground.

Recent interfaith tour of Africa which we started last year with Ambassadors of Peace from Scotland under the UPF banner and with a partner charity from the USA "Eyes on Africa". This year we could visit Ethiopia,Zambia (my former mission country of 1975) and Uganda (my assigned nation). Together with Mr. Aftikhar Ahmed,our AFP here in Scotland we could distribute about $7,000 in donations, laptops, school materials, eyeglasses to not only our own Church projects in each country but also to our partner charities in the Moslem and Christian communities.In addition we distributed $1,000 on behalf of IRFF Sweden.

We hope this has greatly benefited these nations and we hope next year to extend the tour to include also Malawi, and Tanzania or Botswana.
All those who participated this year were really impressed with the development in Africa and are all enthusiastic to participate again next year. Our hope is to grow the team to 10 participants next year. Provisional dates are July 2-18, 2012. I will let everyone know the final schedule as soon as possible and the tour company we used last year is already working on it!
All the best,
Robert Williamson
Regional Leader
Balkans,Europe Harrry Shukla MBE has been credited for great community cohesion work in the Newcastle Gateshead area. He attended the UPF Peace Council last year to talk about his work.  He commented on  the occasion 'When I went to London to Lancaster Gate I met all kinds of lovely people from all kinds of backgrounds. They were doing the work in different ways but all for the same objective which is to create peace and harmony.'