UPF and the Millenium Development Goals We held a local Women's Federation for World Peace - Universal Peace Federation event in Birmingham to recognize the United Nation's Day for Africa. Over 100 people came together, with representatives from 12 different African countries present.

Our first speaker was Rev Charles Ilunga, currently training for the Methodist ministry. He graphically described the horrors which he witnessed and experienced in Congo, and from which he and his family had to flee at barely a moments’ notice.

Is Religion Cause or Cure of Conflict? Imam Dr Abduljalil Sajid 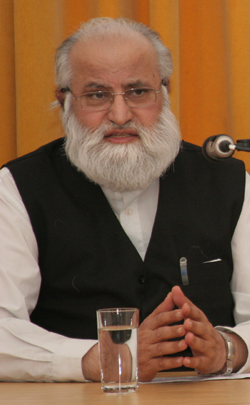 Is Religion Cause or Cure of Conflict?

The Muslim Council for Religious and Racial Harmony

Bismillah Hir Rahma Nir Rahim (I begin with name of God the Most Kind the Most Merciful). I greet you with the greetings of Islam (Assalamu Alaykum wa Rahmatullah wa Barakathu (May God’s blessing and peace be with us all.)

Living and working together is not always easy. Religion harnesses deep emotions, which can sometimes take destructive forms. Where this happens, we must draw on our faith to bring about reconciliation and understanding. The truest fruits of religion are healing and positive. We have a great deal to learn from one another, which can enrich us without undermining our own identities. Together, listening and responding with openness and respect, we can move forward to work in ways that acknowledge genuine differences but build on shared hopes and values. 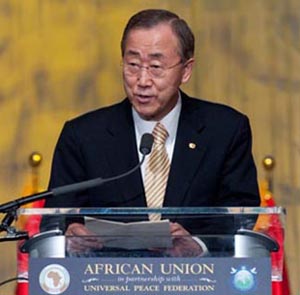 New York, United States - Speaking at the New York City celebration of Africa Day, May 25, 2010 hosted by the African Union and the United Nations African Ambassadors' Spouses Group (UNAASG), in partnership with the Universal Peace Federation, United Nations Secretary-General Ban Ki-moon said that peace and sustainable development in Africa was one of the world body’s priorities, and outlined a major personal effort that will take him to the continent no less than three times in the coming month.

Introduction What is the world’s greatest challenge in the new millennium? Without little doubt, that the greatest challenge we face is the growing chasm between the rich and the poor people on earth. There is not only a great disparity between the two, but the gap is steadily widening. At the beginning of the last century, the ten richest countries were nine times wealthier than the ten poorest ones. In 1960, the ratio was 30:1. At the beginning of this century, average income per person in the twenty richest nations was $27,591 and in the poorest nations only $211, a ratio of 131:1. To plug the widening gap between rich-poor divide, the billions who live on dollar a day need the assistance of international community to fulfil the promise of the completion of Millennium Development Goals* for a better world. In 2000, world leaders agreed by 2015 goals for slashing poverty, hunger, disease, maternal and child deaths, and for improving the environment, education and gender equality. Lack of political will and unmet commitments, inadequate finance (staggering shortfall of billions of dollars) and soaring food prices have become major hurdles in the progress of the MDGs. In fact an estimated 90 million more people are living in extreme poverty today than anticipated before financial crisis. Millions of people who were not part of the financial collapse and did nothing wrong are suffering extreme hardship. The ten-year mark at 2010 presents an important opportunity to re-energize the global Millennium Development Goals (MDG) effort and help the poverty reduction become a reality. 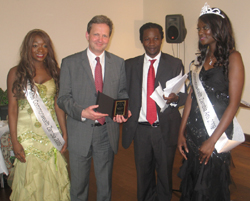 A Remember Africa Award was presented to Robin Marsh, Secretary General of Universal Peace Federation-UK at a ceremony held at the Royal Commonwealth Society on May 22nd, 2010 for services rendered for the cause of uplifting and developing people of Africa.