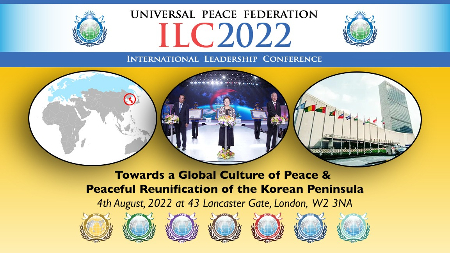 On August 4 at the UPF HQ in London, UK, was held the second day of the International Leadership Conference (ILC) on the theme “Toward Peaceful Reunification of the Korean Peninsula: Creating a Global Culture of Peace”. Following the two sessions cosponsored by UPF and IAYSP in Berlin, Germany, on July 26, three ILC sessions, featuring three different topics, were held at the Lancaster Gate UPF HQ, with approximately 100 participants in attendance and an online audience from Europe and the Middle East. (See the ILC programme below)

Author and commentator, Humphrey Hawksley moderated this session in his typical BBC-trained style.

Keith Best, (video link) the Chair of UPF-UK Board of Trustees and a former MP.

Keith Best praised UPF and in particular the late Father Moon and the current guidance of Mother Moon for their long-term perseverance for the peaceful reunification of the Korean peninsula. He expressed his admiration for the ‘historic document’, the Seoul Resolution that he had just signed at the back of the Hall. He explained that it is based on promoting international order by supporting the UN Charter and International Law. Two fundamental pillars for lasting peace and effective global governance. He highlighted those measures in the Resolution that are aimed at boosting confidence and mutual understanding. He also discussed the impressive list of signatories and potential signatories who had been supporting the event that launched the Seoul Resolution. He found the approach of bringing the wide range of stakeholders to work together to be a powerful approach to peacebuilding. He compared the situation in his experience in West Germany and his visits to East Germany to think of the difficulties of the reunification of Korea. He considered also the Nuclear Non-Proliferation Treaty, currently being reviewed by the United Nations, that confronts the desire of the DPRK to enhance its nuclear capabilities.

Keith Bennett, (video link) a recipient of the Friendship Order of the DPRK by President Kim Il Sung, 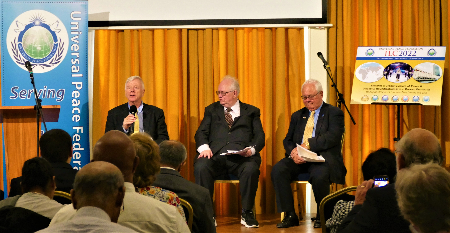 discussed the Seoul Resolution from a DPRK perspective.

Keith Bennett praised Mother Moon’s tireless devotion to the cause of the peaceful reunification of the Korean peninsula, despite her age. He described the Seoul Resolution as a document of great wisdom. He saw the document as a search for the way forward with compromise, magnanimity and a determination to seek a constructive approach.

He explained that the conference at which the Resolution was launched featured media attention on the participation of US right-wing Republicans such as Mike Pence, Mike Pompeo etc. He believed of equal importance, though not emphasised in the media, was the World Summit Co-Chairmanship of the Cambodian Prime Minister Sam Dech Hun Sen. He explained that the Cambodian-DPRK close relationship goes back many decades. The Cambodian Royal Family is also very close to the DPRK. Prime Minister Hun Sen is also close to China, Russia and Vietnam. Cambodia is also the Chair of the 10-member nation, ASEAN, this year. He considered that the wide background of potential support for the Resolution reflects the inclusivity and approach of UPF.

Considering the mention of ‘Confidence Building Measures’ needed, he emphasised the value of a long-term approach rather than the big bang sudden negotiation. He appreciated the use of the DMZ for positive initiatives.  He mentioned the emotional journey from the south into Kum Kang San to visit the tourist area when it was possible. Concluding, he said that the situation on the Korean peninsula is a major destabilising factor in the region and that positive initiatives are valuable and necessary.

Mr Yoshihiro Yamazaki, Liaison Director for Europe and Middle East, Institute for Peace Policies, Japan, and the Coordinator of the International Association of Academicians for Peace (IAAP) for Europe and the Middle East introduced a headwing viewpoint of the Seoul Resolution in the wider context of tensions between China and the United States regarding Taiwan. His main premise was that the ideological understanding of the tensions between atheistic Communist nations and capitalist nations that permit religious belief have not been sufficiently resolved to guide the aftermath of the cold war into lasting peace. A collaborative and inclusive approach that Father and Mother Moon have taken could have been helpful to resolve these tensions.

'In science or any rational methodolgy, if a theory which is built on a certain hyphothesis did not produce a theoretically anticipated outcome, you need to evalutae, revise or abandon the hyphothesis. As the communism, which was built on the philosophical assumption of atheism and materialism, did not produce its advocated outcomes, its premises should be at least reviewed in order to identify an alternative philosophical perception and future vision.

But surprisingly, very few attempts have been made in this direction. It was a serious failure in both west and east camps of the cold war regime! The world missed a historical moment to renew our world views, conducive to create what was said to a new world order.

Without the fundamental ideological shifts, an isolated North Korea felt little pressure to alter its ideology of atheism, materialism and the Chuje Ideology. China, Vietnam and Cuba maintained their communism in their constitutions, officially endorsing atheism. The core of the cold war, namely; the nuclear equilibilium, has more or less sustained, even with new nuclear powers joining in the games. In this respect, Europe was the only theatre to witness a genuine ending of the cold war.'

The role and position of Japan was discussed during question and answers in relation to the Korean peninsula and wider regional peace and security issues.

At the conclusion participants were invited to sign the Seoul Resolution to show their support.

Mr. Jacques Marion, Co-chairman, UPF Europe and Middle East led the Tribute to Mr Shinzo Abe Former Prime Minister of Japan including a minutes silence and a video from Mr. Masayoshi Kajikuri, the Chair of UPF-Japan.

Mr. Heiner Handschin, the Director UPF Office for UN Relations, coordinated this session to highlight the significance of True Parent’s vision for the Inter-religious Council at 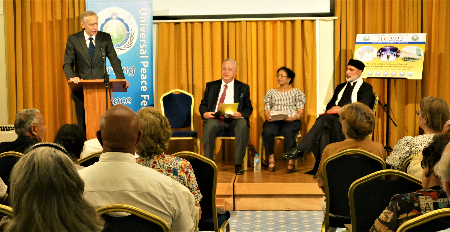 the UN. There were two videos of speeches by Amb. Makarim Wibisono, Former Perm. Rep. of Indonesia to the UN in Geneva, New York and Amb. Dr. Jesus Domingo

Current Philippine Ambassador to New Zealand, to give the background of the Inter-religious Council at the UN. These were followed by speeches from Hon. Jan Figel, the Former European Commission Special Envoy for the Promotion of Freedom of Religion and former Vice-President of the National Council of the Slovak Republic.

Ms. Haleemah Oladamade Ahmad, Senior Research Associate and Chief Editor, Da’wah Institute, Islamic Education Trust, addressed the conference from Nigeria. Dr. Lakshmi Vyas, who is the President of the Hindu Forum of Europe and holds many other Hindu and interfaith roles. The Director of the Oxford Islamic Information Centre Sheikh Dr. Hojjat Ramzy who was a Trustee of UPF – UK spoke very passionately.

This considered the ideological background to the tensions between east and west Europe in general although the Ukraine and Russian war emerged as the point of focus of those tensions.  (Photo Caecilia Van Peski, Chantal Komgata and Paul Gutteridge (All sitting) and Nina Novacova MP (Czech Republic).

The final session was moderated by Ms. Chantal Chételat Komagata who is the Coordinator for UPF Europe. A very dynamic lady, Ms. Caecilia van Peski who is the Academic Fellow for the Institute for Peace and Conflict Studies, Juniata College and a Member, UN Senior Women Talent Pipeline, The Netherlands, spoke partly about her experience with Ukraine military as well as the importance of feminine values in resolving conflicts. Dr. Willy Fautré, CEO and Director, Human Rights Without Frontiers International, Belgium, spoke on the conflicting narratives of Russia and Ukraine and western European nations in a speech published in the Diplomat here. Hon. Niná Novákova, Member of Parliament, Czech Republic, (see video here) emphasised the protection of the family rights and values. Mr. Paul Gutteridge was the final speaker. He is the Former UK Director, Initiatives of Change; Honorary Fellow, Edward Cadbury Centre, University of Birmingham. He specialises in building trust between extremist groups that are in conflict with each other in order to de-risk societal tensions and spoke of how to use those skills on this wider international context.

The discussion focused on the ideological underpinnings of the new East - West conflict, and on tensions and different perspectives among democracies in Europe regarding individual rights, traditional values, and how can these trends be harmonized to promote a global culture of peace.

In a Closing section Dr Michael Balcomb introduced a practical UPF youth service project, building a peace garden in an eco-park in Birmingham, that has been organised by Dr David and Patricia Earle. It had been underway over the previous 3 days. Photos of the project were shown. Patricia Earle invited Rani Gundhu, a Senior Police Officer, who had addressed the young people participating, spoke of the value of this project.

10 am Registration and Refreshments

The Seoul Resolution was signed by participants at the World Summit 2022 for Peace on the Korean Peninsula, co-chaired by former UN Secretary General Ban Ki-moon and Cambodia Prime Minister Hun Sen. It promotes a multi-sectoral approach that embraces ‘current and former Heads of State, parliamentarians, high-level representatives, religious leaders, academicians, business and media leaders, women leaders, and artists’, bringing a wide range of wisdom and experience to the search for peace, as well as figures from across the political spectrum and the geopolitical divide. It does not leave the pursuit of peace to politicians alone. Supporting a “Two States Toward One Nation: One Peninsula, One People, One Culture” initiative, it promotes people-to-people ties and cultural assets and heritage to serve as a bridge of trust connecting the two Koreas. This session will explore the strategy of the Seoul Resolution and its application on the Korean Peninsula and in the wider region.

Mr. Keith Best, Chairman of the Board of Trustees, UPF UK; former Member of Parliament, UK

Since its founding in 1945, the United Nations has been an inestimable force for peace in the world. However, despite its many achievements, it remains far from being fully effective. In 2000, UPF's Founders proposed the establishment of an “Inter-religious Assembly” at the core of the UN. Harnessing the wisdom and capacity of the World's Religions for holistic thought and action, this would enhance the focus on higher-level values within the U.N. and raise its effectiveness in fulfilling its mandate to create lasting world peace. The session will bring together faith leaders and experts on the U.N. and in international affairs to examine the proposal for such an assembly and its potential to avert and resolve conflicts more effectively.

Amb. Makarim Wibisono, Former Perm. Rep. of Indonesia to the UN in Geneva, New York; Special Rapporteur on the Situation of Human Rights in the Occupied Palestinian Territories (video)

Among other factors, the European Union’s expansion has caused a final explosion between Russia and Ukraine, sending the entire region into a quagmire worse than any crisis during the Cold War period. Analysts focus on the conflicting geopolitical and security interests driving this political, economic and military power struggle, speaking of a new Cold War. This panel will explore the conflict from a different angle: What are the ideological underpinnings of this new East - West conflict? Even within the EU, there are tensions and different perspectives between liberal democracies in the West and some former Eastern Bloc countries. Two trends can be observed: promoting individual rights to overcome discrimination vs. maintaining traditional values and defending national sovereignty. Can these trends be harmonized? What cultural assets and heritage could serve as a bridge to overcome the gaps, thus leading to a peaceful resolution of the conflict and presenting a model for a culture of peace?