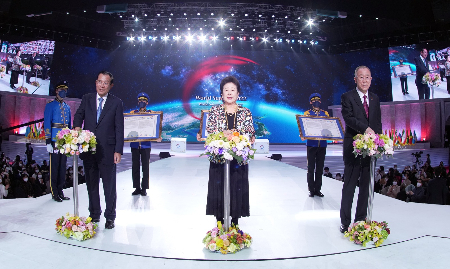 “Toward Sustainable Peace and Prosperity on the Korean Peninsula”

Recognizing that the Korean War, which started in 1950, was concluded with an armistice, not a peace treaty, leaving the once unified Korean Peninsula divided, despite being populated by a people with a common history, culture, and language;

Acknowledging that the tragic conflict resulted in approximately 3 million fatalities and leaving a legacy of bitter suffering and distrust between the people of the two Koreas;

Believing that the peaceful reunification of the Korean Peninsula is imperative for peace and stability in the Asia-Pacific region and beyond;

Appreciating the commitment of the Founders of the Universal Peace Federation, Rev. Sun Myung Moon and Dr. Hak Ja Han Moon for their dedication over the past 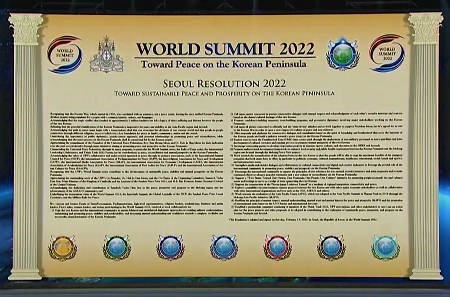 several decades through many initiatives aiming at promoting peace and prosperity on the Korean Peninsula;

Commending the Universal Peace Federation, through its many programs, in particular the World Summit series, the Rally of Hope series, the International Leadership Conferences, and Think Tank 2022 Forum, for its contributions to peace, reconciliation and mutual prosperity on the Korean Peninsula;

Recognizing that the UPF’s World Summit series contribute to the advancement of sustainable peace, stability and mutual prosperity on the Korean Peninsula; 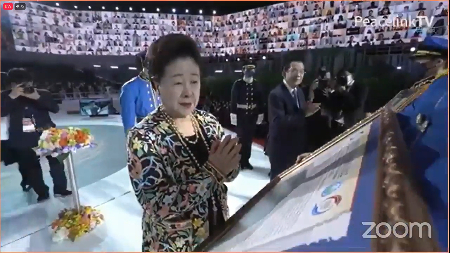 Appreciating the outstanding work of the UPF’s Co-Founder, Dr. Hak Ja Han Moon, and the Co-Chairs of the Organizing Committee, Samdech Techo Hun Sen, Prime Minister of the Kingdom of Cambodia and Laureate of the Sunhak Peace Prize 2022, and H.E. Ban Ki[1]moon, former Secretary General of the United Nations;

Acknowledging the dedication and contribution of Samdech Techo Hun Sen to the peace, prosperity and progress in the Mekong region and the advancement of the ASEAN Community; and

Underlining the tremendous value of the World Summit 2022, the Interfaith Summit, the Global Assembly of the ISCP, the Sunhak Peace Prize Award Ceremony, and the Million Rally for Peace.

1. Urge the two Koreas and the international community to pursue bilateral and multilateral diplomatic approaches to avoiding military confrontations, maintaining and promoting peace, stability, and predictability, and increasing mutual understanding and confidence towards a complete, verifiable, and irreversible denuclearization of the Korean Peninsula;

2. Call upon parties concerned to pursue a constructive dialogue with mutual respect and acknowledgment of each other’s security interests and concern based on the shared cultural heritage of the two Koreas;

4. Offer proposals and platforms for constructive dialogue and consultation based on the spirit of friendship and brotherhood that serve the interests of the Korean people and build a pathway towards a peace treaty on the Korean Peninsula;

5. Explore ways to utilize the Demilitarized Zone (DMZ) to advance peace on the Korean Peninsula through the development of cultural corridors and tourism infrastructure, and the deployment of non-military personnel at the DMZ as peace guardians;

6. Encourage concerning parties to develop cooperation projects in tourism, sports, culture, and education in the DPRK and beyond;

7. Promote multi-sectoral development frameworks to enhance food security and public health cooperation between the Korean Peninsula and the Mekong region and beyond through the Mekong Peace Park Project;

8. Work towards the normalization of the relations between the two Koreas so that the people will be able to reap the maximum benefits of the untapped potentials that both states have to offer, in particular in political, economic, cultural, humanitarian, healthcare, educational, social (youth and sports), and infrastructure areas;

9. Strengthen multi-stakeholder dialogue and collaboration on cultural connectivity and digital and creative industries to leverage the pivotal role of the international community in promoting peace, stability, and prosperity on the Korean Peninsula;

10. Encourage the international community to support the principles of zero tolerance for war, mutual security assurance, and joint prosperity and to make continued efforts to advance a peaceful resolution and a new culture of reconciliation on the Korean Peninsula;

11. Promote track 1.5 diplomacy and track 2 dialogue and use a soft power approach to advancing peaceful reunification of the two Koreas under the framework of the “One Peninsula, One People, One Culture” by utilizing and promoting people-to-people ties, cultural resources, and connectivity to serve as a bridge of trust connecting the two Koreas;

12. Support the construction of the “Korea-Japan Undersea Tunnel” as a medium of regional integration, connectivity, and peace;

13. Explore a possibility for joint business venture projects between the two Koreas and with other major economic stakeholders as well as collaboration with other international organizations and fora such as the G20, ASEAN and others;

15. Reaffirm the principle of mutual respect, mutual understanding, mutual trust, and the mutual interest for peace and prosperity (M4P2) and the promotion of international order based on the UN Charter and international law; and

16. Establish a partnership committee consisting of members of the Think Tank 2022, UPF associations, and other stakeholders to carry out an action plan for the peace projects and other proposals to be adopted in contributing to the realization of sustainable peace, prosperity, and progress on the Korean Peninsula and beyond.

This Resolution is adopted and signed on this day, February 13, 2022, in Seoul, the Republic of Korea, at the World Summit 2022