The World Summit 2022 for Peace on the Korean Peninsula was held in Seoul, Korea, from February 11 to 13. Some 160 nations were represented, including 157 nations with diplomatic ties to one or both of the Koreas. The Summit was sponsored by the Universal Peace Federation (UPF), an NGO in General Consultative Status with the Economic and Social Council of the United Nations, and by the Royal Government of Cambodia. Hosted by UPF Co-Founder Dr. Hak Ja Han Moon, the Summit was co-chaired by H.E. Hun Sen, Prime Minister of Cambodia, and H.E. Ban Ki-moon, former Secretary-General of the United Nations.

Cambodian Prime Minister Samdech Hun Sen opened the Summit at the Lotte Hotel World in Seoul. Then, virtual greetings were given live from the Korean National Assembly by Vice Chairman Chung Jin-suk and former US Speaker Newt Gingrich, and from the Japanese Diet by Hon. Yoshiaki Harada, former Minister of the Environment. 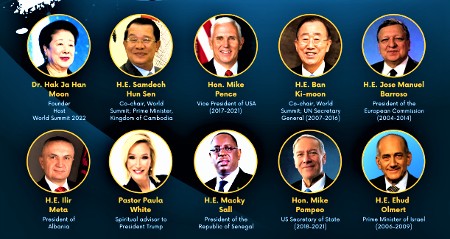 The Summit sessions featured heads of state, government ministers, parliamentarians, scholars, and media representatives from each region of the world. They addressed the many challenges to peace on the Korean Peninsula, such as resistance to denuclearization, strained Korea-Japan relations, tensions between China and the United States, and core differences between North and South. At the same time, they offered a range of solutions, such as encouraging new friendships with the North Korean people through trade, tourism, sports, music, and cultural exchanges.

On February 12 in the morning, the Sunhak Peace Prize Award Ceremony honored Dame Prof. Sarah Catherine Gilbert of Oxford University for her role in developing the AstraZeneca vaccine and ensuring its availability at cost, and Gavi, the Vaccine Alliance, for its achievement in dealing with the COVID pandemic throughout the world as well as its ongoing work to provide vaccines to over 800 million of the world’s neediest children.

The Founder’s Special Award was given by Dr. Hak Ja Han Moon to Samdech Hun Sen, Prime Minister of the Royal Government of Cambodia, recognizing his role in lifting his country from civil war and a murderous past into prosperity and peace.

The Global Summit concluded with a “One Million Rally of Hope” and renewed calls for unity on the Korean Peninsula. The main event was held at the CheongShim Peace World Center near Seoul, and broadcast simultaneously in 52 locations in South Korea as well as throughout the world.

In his welcoming remarks H.E. Ban Ki-moon, former Secretary-General of the United Nations and Co-chairman of the Summit, expressed his hope that “one day in the near future the people of the South can directly engage with their brothers and sisters in the North.” He was followed by speeches from former US President Donald Trump, former Japanese Prime Minister Shinzo Abe, former EU Commission President José Manuel Barroso and Nigerian President Muhammadu Buhari.

Each continent was represented by prominent speakers who shared with the global audience their assessment of the prospects for peace on the Korean Peninsula. While former US Vice President Mike Pence, former US Secretary of State Mike Pompeo and US investor Jim Rogers spoke in person, the views from Europe were conveyed through video by President Ilir Meta of Albania, Prime Minister Albin Kurti of Kosovo, former EU Commission President Romano Prodi and former heads of government Dominique de Villepin from France, José Maria Aznar from Spain, and Ahmet Davutoglu from Turkey.

Dr. Moon closed the Summit with a moving speech thanking world leaders for their contributions in support of peace on the Peninsula. She expressed her concern for the multiple challenges to peace in the world, notably in Eastern Europe and Northeast Asia, and for the damage caused to the environment by the lack of human responsibility. “These challenges cannot be met by human effort alone,” she said. “Building one family under God is the only way to bring about a world filled with freedom, equality and peace.” In an emotional conclusion, she asked the citizens of North and South Korea and all nations present to join with her to achieve unification on the Korean Peninsula and true peace throughout the world.