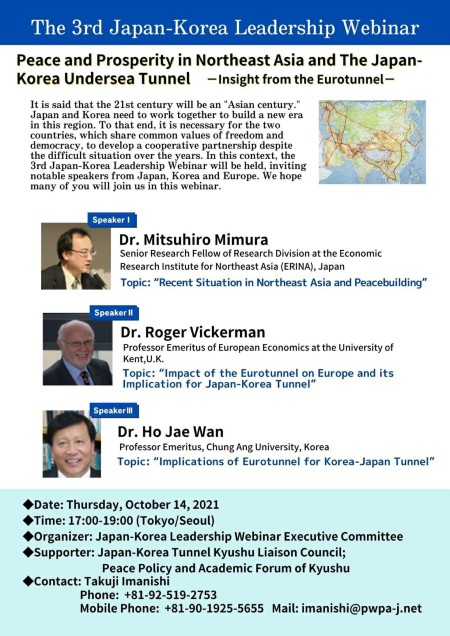 Emeritus Professor Roger Vickerman addressed a distinguished international conference organised by Japan and Korea UPF on October 14th. Entitled 'Peace and Prosperity in  Northeast Asia and the Japan-Korea Undersea Tunnel - Insight from the Eurotunnel', the conference featured three academic experts evaluating the potential role of the tunnel to bring peace and prosperity to Japan, Korea, and the nations of Northeast Asia extending into Eurasia. Dr Mitsuhiro Mimura, Senior Research Fellow of the Research Division at the Economic Research Institute for Northeast Japan, spoke on the topic, 'Recent Situation in Northeast Asia and Peacebuilding'. Dr Ho Jae Wan, Professor Emeritus of Chung Ang University, Korea also considered the implications of the Eurotunnel to the thinking for the tunnnel between Japan and Korea. Several Japanese and Korean parliamentarians made brief comments during the programme.

Professor Roger Vickerman is the Emeritus Professor of European Economics at the University of Kent, and Visiting Professor and Chair of the Transport Strategy Centre, Department of Civil and Environmental Engineering, Imperial College London. He has published widely on many aspects of transport and is the author of 6 books, over 200 papers and editor of 6 editions. He was Editor in Chief of the journal Transport Policy from 2010-2016 and is Editor in Chief of Elsevier’s International Encyclopaedia of Transportation to be published in May 2021. His recent research has focussed on the wider economic impacts of transport infrastructure investments, particularly high-speed rail. He has served as an advisor to Parliamentary Committees in the UK and as a consultant to the European Commission, various government departments and regional and local government authorities in the UK and worldwide. He was awarded the Jules Dupuit Prize of the World Conference on Transport Research Society in 2016.