Universal Peace Federation Ireland and the UK held a Peace Road Walk and Forum in Derry / Londonderry on September 26th.

After an enforced break last year due to Covid-19, Universal Peace Federation (UPF) Ireland followed up on 2019’s Peace Road Walk and Forum in Downpatrick and on an inaugural Peace Road Walk & Forum in 2018. That September 2018, we walked the Battle of the Boyne battlefield in Oldbridge, Co. Meath and held our Forum in the Four Seasons in Carlingford with wonderful and insightful, inspiring presentations by Peace Ambassadors Linda Ervine, Zeinab El Mustafa, Hon Keith Best and BBC Journalist & Author, Humphrey Hawksley, to name a few. To celebrate UN Day of Peace 2021 (Tue 21.9.21) we convened another Peace Road Walk & Forum this year, with the theme: "Ending Conflict in Ireland - Lessons for the World?" on Sunday 26 September 2021 in Derry City. (See promo video https://youtu.be/9ECFL7mF-9Y ) Derry city, has many names, known as the “Maiden City” due to its walls never having been breached despite the famous siege on the Protestant ‘settlers’ by the ‘native’ Catholics during and since the ‘Siege of Derry’ in 1688 and the brave defence of the city and its walls and 7 gates by the Apprentice Boys of Derry. The city was originally called ‘Doire’ or ‘Doire Choilmcille’ in Gaelic which means ‘Oak Grove’ or ‘the Oak Grove of St. Colm’, after St. Columcille (or St. Columba) who is one of the most important saints in Irish Christian history for both Catholic and Protestant Churches. He established Christian settlements and missions throughout Ireland and Scotland.

Derry city is very conscious of its troubled, sectarian history and can be seen as an example of the extremes of the past religious conflict in Ireland, as well as modern political trouble due to tensions between those who still see the city and Northern Ireland as part of the Irish Republic (Nationalists/Republicans) and those who prefer that it remain part of the United Kingdom (Unionists/Loyalists). Despite that, since the emergence of the Peace Process in Northern Ireland and the Good Friday Agreement in 1998, Derry/Londonderry has emerged as a major site of cross-pollination and cultural diversity on the island of Ireland, with a vibrant sporting, film/television and music community. However, it continues to face the same old challenges today, as some from the different communities still seek to emphasise the importance of their tradition’s perceived superiority over that of others. Derry has always been at the centre of great changes and upheaval in Ireland. This year, as we celebrate the 1500th year of St. Columcille’s birth and commemorate the centenary of the partition of Ireland and founding of Northern Ireland and in February next year, the 50th anniversary of ‘Bloody Sunday’ and the shooting dead of 14 unarmed civil rights protestors by the British Army. What better place to gather and pay tribute to the legacy of our successful Peace Process and celebrate its ‘dividends’ by outlining the diversity and prosperity of our new Ireland?

UPF Ireland believes in a vision of unity between communities and those of different national identity and want this event to showcase our efforts to continue to bring disparate identities together in mutual peace, respect and understanding, to practice True Love through walking and talking together in a prayerful and respectful manner about our shared ideals of peace and how to work to transcend our differences and ensure they are points of diversity and strength not conflict.

Derry is widely regarded as the place where the modern ‘Troubles’ started in Northern Ireland, following the ‘Battle of the Bogside’ in 1969 when the local police (the ‘Royal Ulster Constabulary’ - since disbanded and reformed as the PSNI with officers drawn from all communities), stopped a demonstration by Catholic Nationalists for civil rights, which in turn led to them attacking the Apprentice Boys’ Parade commemoration in August 1969. The Peace Road Walk was held on Sunday morning, September 26, 2021, including a one hour guided walk around Derry city which took in locations and sights of historic and religious significance, such as the Walls of Derry and the Civil Rights March route. On the route we will pass some locations of important faith significance, stopping for a brief interfaith prayer reading from the 'World Scriptures: Anthology of Sacred texts'. The Peace Road Forum was held after a buffet lunch at the Forum venue, Derry City Hotel. There was a cross-community participation in this event that highlighted the success and benefits of the peace process as well as the ongoing building of its institutions, despite recent challenges such as Brexit, Irish Sea Border, etc. The Speakers and Panellists reflected this. The ‘Forum’ that convened after lunch around 2 p.m., with the keynotes and Q&A finished at 5pm (including new Peace Ambassador award presentations and closing remarks, etc).

UPF seeks to promote interfaith harmony, family values, mutual prosperity and peace through dialogue and community bridge-building. Content of addresses and brief to keynote speakers will emphasise our values of interfaith, family, mutual prosperity and good governance, peace, tolerance and harmony above all. We believe this event will highlight our larger vision of interfaith peace, tolerance and parity of esteem for all on the island, especially our ‘new Irish/Northern Irish’ who are enriching our culture greatly and building a new future of peace with us, despite the challenges of integration and our troubled history. 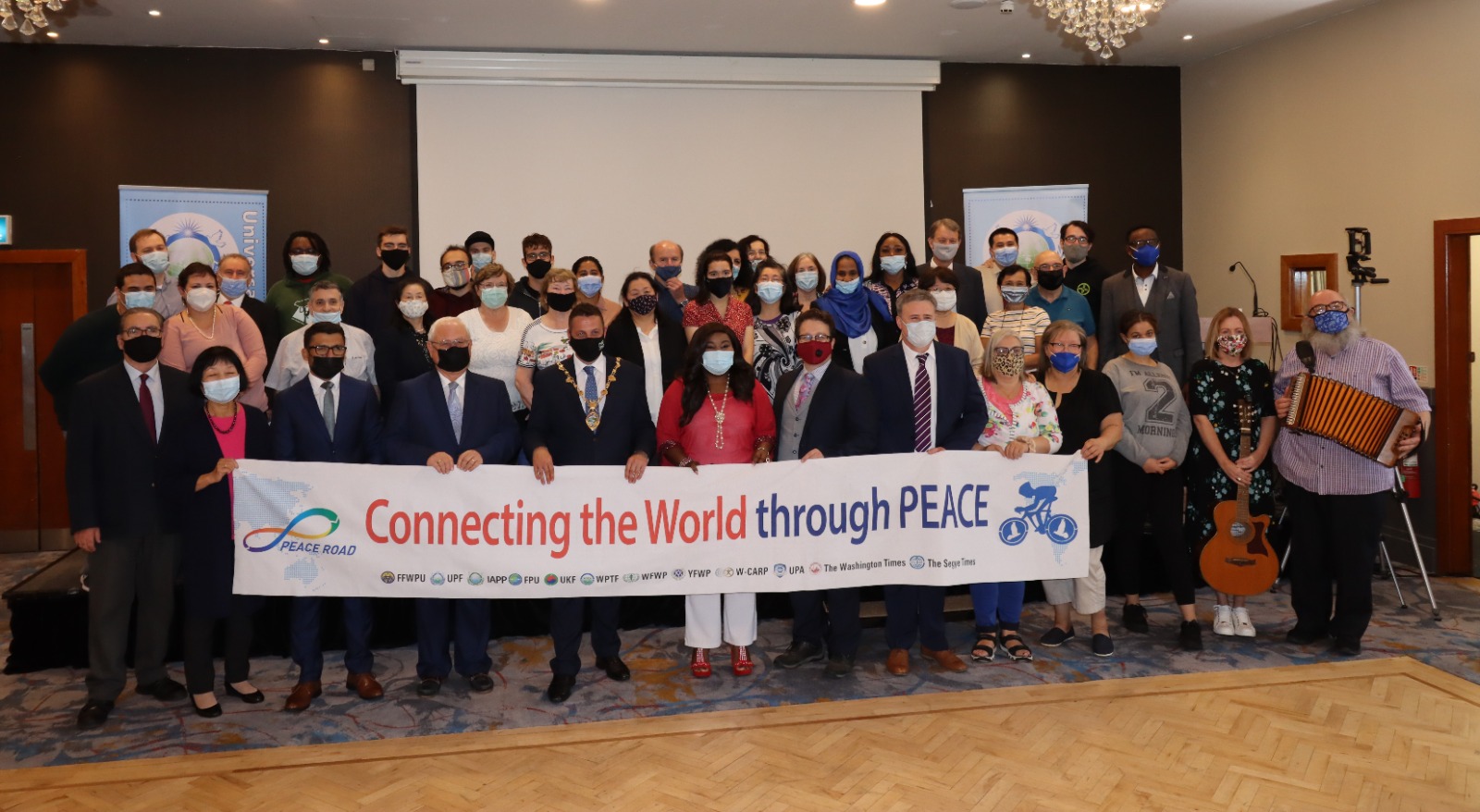 Mr. Gleann Doherty, owns and operates www.derryguidedtours.com and is a fully trained Derry tour guide with a B.A Hons degree in Irish History & Politics from University of Ulster. Gleann conducts political & historical walking tours of Derry and coach tours of Donegal. He is an expert in all areas of Irish history from St. Colmcille, the Plantation of Ulster, 1641 Rebellion, Siege of Derry, 1798 Rebellion, Battle of the Bogside, Bloody Sunday, the Peace Process and right up to present day politics. Gleann specialises in teaching peace and conflict studies to university & school groups. Gleann has personal tragic experience of having his dad murdered on Bloody Sunday.

Abood AlJumaili, a.k.a. Bonnar Ó Loingsigh, is a Justice, Diversity, Equality, Integration and Inclusion Advocate and Advisor. He is also a GAA Hurling player and SARI (Sport Against Racism Ireland) Ambassador. Mr. AlJumaili is a Parliamentary Intern at Dáil Éireann (Irish Parliament) and Project Officer with Ireland’s largest youth information website (SpunOut), which includes a project which he is leads, focusing on the voices of the Irish youth. Abood is also the UNESCO Council of Europe TRUST Competition winner 2021. The UNHCR has published a video about Abood’s integration work in Irish Society.

Cllr. Yemi Adenuga is Ireland’s first ever elected Black Female public representative and Meath County Council’s first migrant councillor. She ran in the local elections of May 2019 and was elected as a Fine Gael councillor, representing Navan Municipal District. Yemi and her family ‘The Adenugas’ are the first migrant family to feature on the TV hit reality show ‘Gogglebox Ireland’ which aired on Virgin Media Ireland. Yemi first lived in Dublin when she came to Ireland in 2000, and relocated to Navan in 2004, where she lives with her husband and children. Yemi has a background in Radio and TV Broadcasting as a presenter, Newscaster, producer and Talk show host. She is a People Development Strategist, a Confidence Coach and an entrepreneur who builds people through the MIB INSTITUTE of People Development. She holds a Business Studies Degree and Post-grad cert from UCD Innovation Academy and an MBA from Liverpool John Moores University. Cllr Adenuga is also a social Entrepreneur, who founded Sheroes Global, a social enterprise which Inspires, empowers, and impacts women and young people to be more. The initiative delivers skills acquisition training to women and youth through its Sheroes Empowerment program, builds the confidence of young girls in the community through its Sheroes Girls club and empowers male mentors in communities to raise boys to be good men through its Sheroes boys-to-men project. Through her ‘Exploring Options’ Project, she gives career guidance to secondary school students, helping them explore various options available to them based on their passion and personality type, using the ‘Exploring options’ book, which she gives FREE to young people. 12,500 copies of the book have been given to students FREE in different parts of the world. 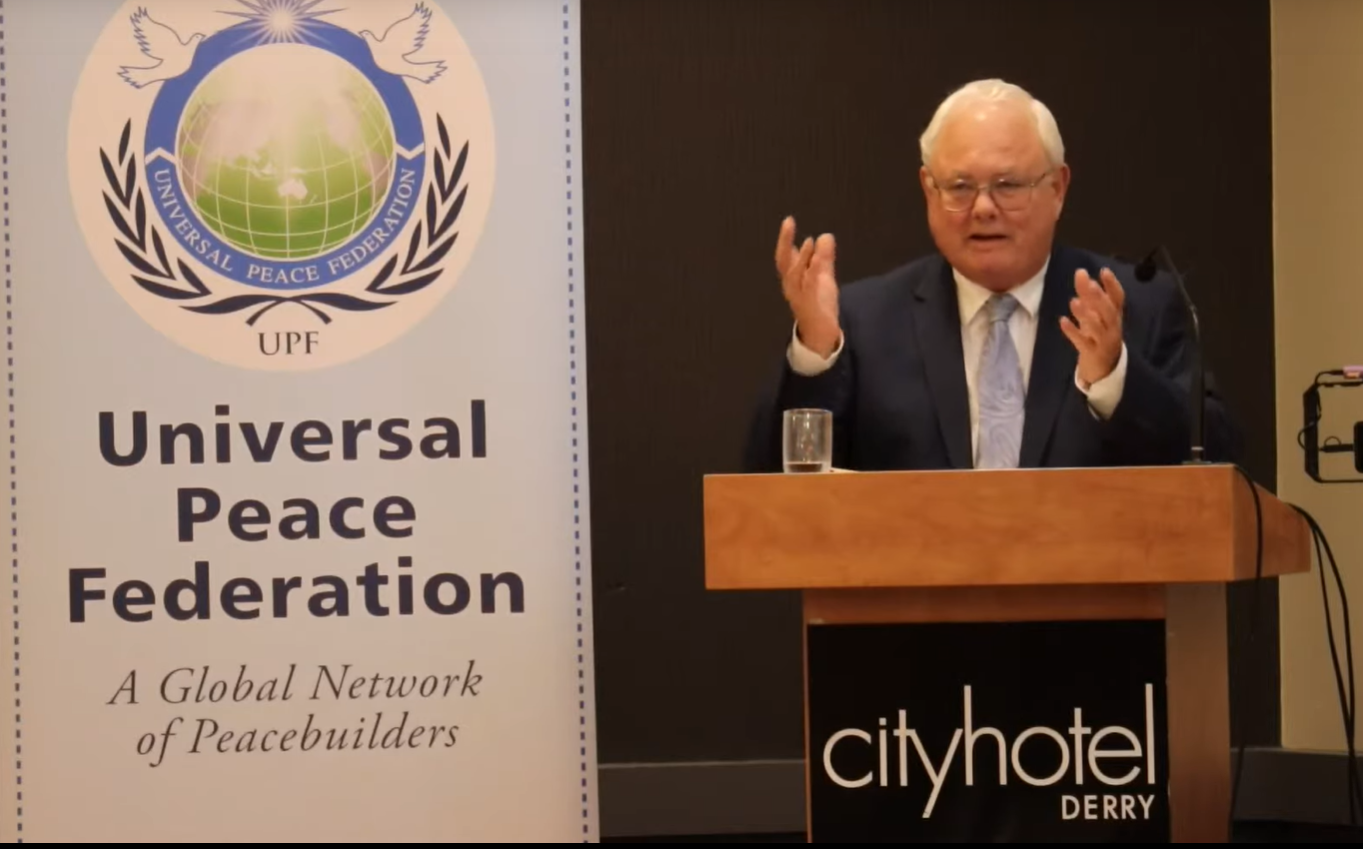 Hon. Keith Best (born 10 June 1949) is a former Conservative Party politician and was MP for Anglesey from 1979, when he gained the seat from Labour until 1983, and for the renamed Ynys Môn from 1983 to 1987. He was Parliamentary Private Secretary to the Secretary of State for Wales from 1981 to 1984. He has since led the Prisoners Abroad (1989–1993), the Immigration Advisory Service (1993–2009), Freedom from Torture (2010–2014) and SurvivorsUK (2015-2018) and is currently Chairman of UPF UK as well as the Executive Chair at World Federalist Movement-Institute for Global Policy. With the current strife in the Middle East and constant tension on the Korean Peninsula, amid lifelong attempts to bring peaceful Re-unification to their homeland by our co-founders Rev. & Mrs. Moon, our event hopes to show to what a successful Process of Conflict Resolution looks like and provide encouragement to areas that are still in political and/or religious turmoil and division through the world-wide ‘Peace Road’ initiative