Sixth Rally of Hope and Launch of Think Tank 2022

Sixth Rally of Hope, & launch of Think Tank 2022 for the Peaceful Reunification of the Korean Peninsula

See Video of Highlights Held on May 9th 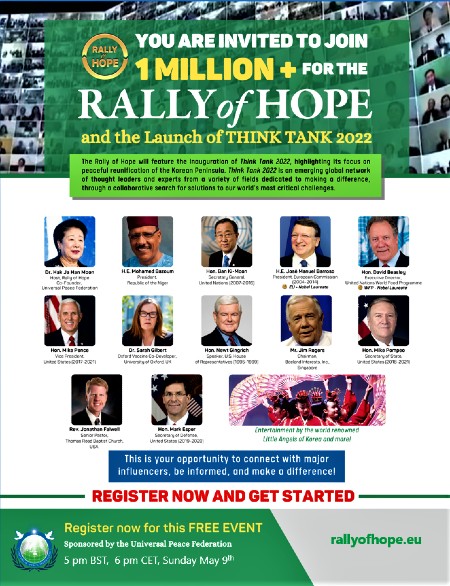 This was an inspiring selection of prominent leaders from the United States, Korea, and all parts of the world. The official inauguration of Think Tank 2022 with the signature of UPF's co-founder, Dr. Hak Ja Han Moon, who also banged the gong as is a tradition to mark such an occasion. This was accompanied by the stunning announcement that former UN Secretary-General, Hon. Ban Ki-moon, had agreed to be its Chairman.

World-class leaders including the rally’s 12 keynote speakers affirmed and enhanced the concept of Think Tank 2022. “This network will make a difference for peace on the Korean Peninsula through international unity,” said Ban Ki-Moon, “I applaud Dr. Hak Ja Han Moon, UPF, and the leaders of Think Tank 2022.”

The rally, sponsored by the Universal Peace Federation (UPF), was streamed live from South Korea to 194 nations and translated into 14 languages. Think Tank 2022 is a global multi-sector network of more than 2,000 experts from a wide range of fields—government, business, academia, faith, media, arts and culture—dedicated to the collaborative search for solutions to the world’s most critical challenges.

The Rally of Hope encapsulates the desire of humanity to overcome its current challenges and emerge from the pandemic more harmonious, multi-lateral and on a more sustainable basis.

From a UK perspective, it was not only good to hear of the valuable contribution of the Oxford University Astrazenica vaccine to counter Covid 19 throughout the world through the Covax programme, but also the recently announced malaria vaccine that was an unprecedented 77% effective in trials. Prof. Sarah Gilbert appreciated the Universal Peace Federation's values of interdependence, mutual prosperity and universal values and its encouragement of nations to work together because no one is safe until all are safe in a pandemic.

Universal Peace Federation (UPF) uses the terms interdependence, mutual prosperity and universal values for a world that is inclusive, caring and effective in dealing with the crises that affect all nations. The Covid 19 pandemic, climate change, poverty, food insecurity, illiteracy are but a few issues that need to be handled multi-laterally to resolve them effectively. Self-interest, however, from the individual to blocks of nations has led to a deterioration of international relations and is constraining the capacity of the multi-lateral institutions we do have, to respond effectively.

The inauguration of Think Tank 2022 represents the current international focus of UPF to make extensive efforts for the peaceful reunification of the Korean peninsula. Assembling multi-sectoral expertise from the UPF network of Ambassadors for Peace will provide a good opportunity for greater understanding between those in the North and South of the Korean peninsula. Coming to the point of peaceful reunification will require the rapprochement of the USA and China/Russia as well as the nations supporting them.

The Sixth Rally of Hope and its focus on the issues on the Korean peninsula through the inauguration of Think Tank 2022, should be seen from this perspective.

Ten governors of South Korean provinces, where Think Tank 2022 will be presented in five regions, congratulated Dr. Moon, who hosted the rally. Many speakers, including former Republic of Korea Prime Minister Chung Sye-Kyun and Cambodian Prime Minister Hun Sen, praised the timeliness of Think Tank 2022 where “international cooperation and solidarity is needed now more than ever,” said Chung.

Mr. David Beasely, executive director of the United Nations World Food Programme, the world’s largest humanitarian organization and 2020 recipient of the Nobel Peace Prize, said, “This rally is reaching across continents, uniting people all over the world in a spirit of peace, mutual prosperity and public service.”

We invite you to this “Launch of THINK TANK 2022 for the firm establishment of the Heavenly Unified Korea” lead by Dr. Hak Ja Han Moon, the Mother of Peace. We carry a vision where a peaceful world can only be achieved when the world comes together as one human family under Heavenly Parents through interdependence, mutual prosperity, and universal values. All problems can be solved, not by our human-centered thinking and standards, but when humanity attends God in the position of children.

The Rally of Hope series—which transcends political, religious, racial and ideological boundaries—seeks to build a unified and more peaceful world around the core ideals of interdependence (mutual respect, cooperation, and recognition of our common humanity), mutual prosperity (reduction of extreme poverty and commitment to human flourishing), and universal values (the faith-based common ground that we share across boundaries of nationality, religion, culture, and race).

“I will devote the remainder of my life to ending war, immorality and greed, and liberating God’s heart so that we can build a world overflowing with true peace and love.” - Dr. Hak Ja Han Moon

Since August 2020, there have been five Rallies of Hope, each drawing more than 10 million online participants from around the world. Globally renowned leaders have addressed a range of issues such as the COVID-19 pandemic, environmental degradation, poverty and inequality, ethnic and race relations, and international security.

You can join this free event and become part of a transformational movement of presidents and first ladies, parliamentarians, faith leaders, the media, scholars, artists, business leaders and concerned citizens who embrace freedom, peace, and unity. The Rally of Hope will offer translation in numerous languages.

From Africa, Zanzibar President Dr. Hussein Ali Mwinyi recalled that Africans took part in the Korean War and long for peace and democracy in that region. The peaceful reunification of Korea will lead to “explosive growth,” said renowned American businessman and investor Mr. Jim Rogers. “If trains run through the DMZ and cars run on highways, there will be endless economic development opportunities... benefiting not only the two Koreas, but also China, Russia, Japan and Asia and the whole world.”