Toward An Undersea Tunnel Connecting Japan and Korea: Eurotunnel and the Marmaray Tunnel 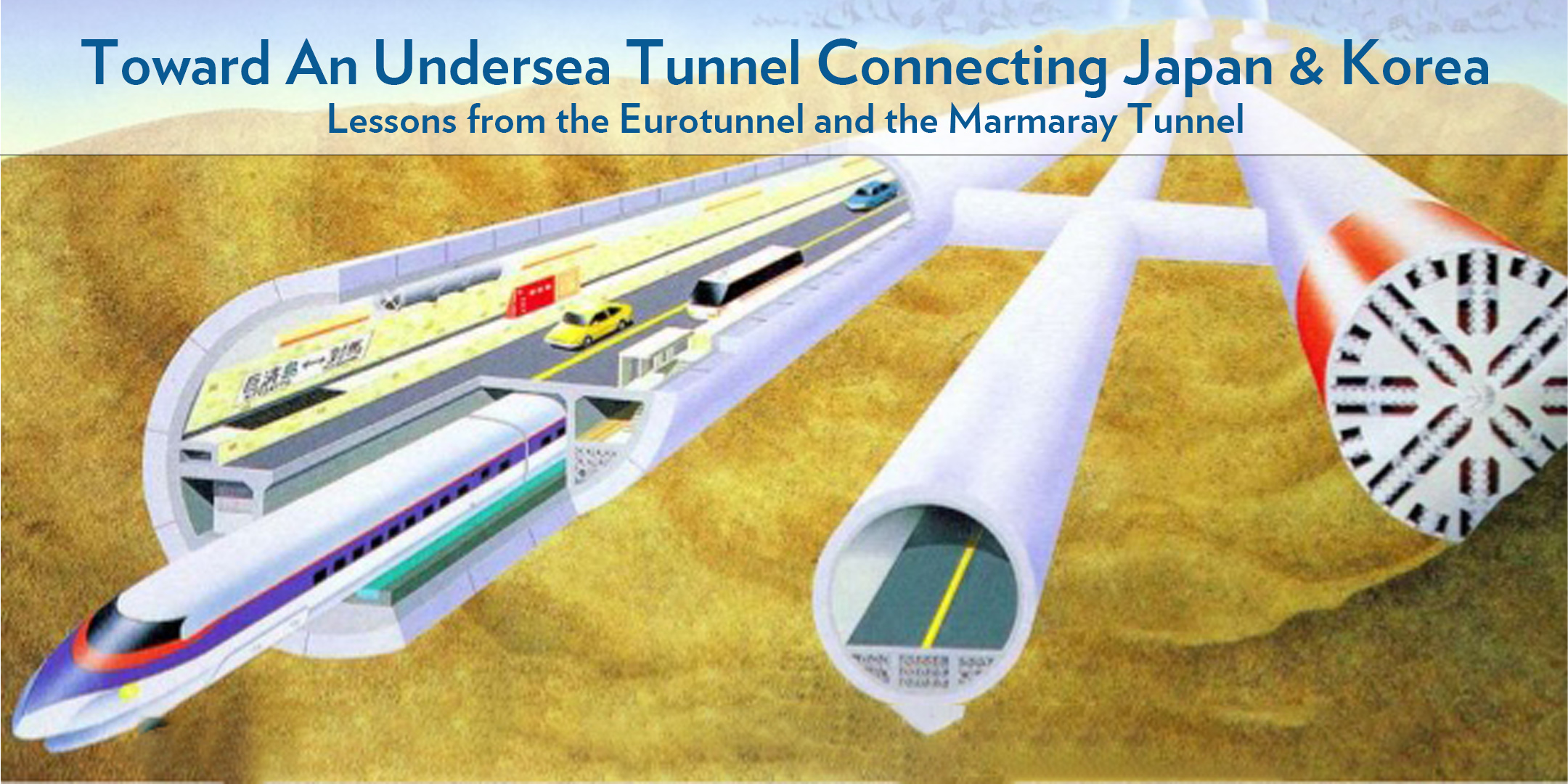 Toward An Undersea Tunnel Connecting Japan and Korea: Lessons from the Eurotunnel and the Marmaray Tunnel

Q and A Session

The IAED webinar of ILC2021 was held jointly by UPF of Europe and the Middle East and UPF Japan. The moderator, Mr. Robin Marsh, secretary-general of UPF-United Kingdom, presented the theme and noted that a tunnel between Korea and Japan would have profound effects in East Asia for peace and prosperity.

In his introductory remarks, Mr. Masayoshi Kajikuri, the chair of the International Highway Construction Foundation and chair of UPF-Japan, explained the origin of the International Peace Highway Project, which Rev. Dr. Sun Myung Moon, the co-founder of UPF, proposed in 1981 at the 10th International Conference on the Unity of the Sciences (ICUS) in Seoul. In his vision, the Japan-Korea Undersea Tunnel would be the terminus of international highways. Following the tunnel project’s inclusion in the Japan-Korea Summit in 2010, the foundation seeks to encourage a bilateral agreement between Japan and South Korea on the project and garner widespread support.

Dr. Yoshimitsu Nishikawa, a research fellow at the Institute of Social Sciences of Toyo University in Japan, proposed an undersea tunnel, over 230 kilometers in length, connecting the Japanese island of Kyushu with the South Korean city of Busan. He argued that an undersea tunnel would have a great effect on the economic development of the two countries, facilitating the transportation of tourists and the mutual exchange of energy, and would contribute to peace and stability in Northeast Asia.

Ms. Gözde Dizdar, the vice president of Centrist Asia Pacific Democrats International, Turkey, explained about the Marmaray Tunnel: It is the deepest immersed tube tunnel in the world with a depth of 60 meters, connecting the European and Asian sides of Istanbul across the Bosporus Strait. The construction by a consortium of Japanese and Turkish contractors had to overcome many challenges, including the seismic design for earthquake resistance of 7.5 Richter, the high ship traffic (50,000 ships a year), archeological findings, and political pressures.

Professor Roger Vickerman, emeritus professor of European economics at the University of Kent in the United Kingdom, spoke about the Channel Tunnel between England and France. Begun in 1987 and opened in 1994, the 50km tunnel system provides two types of services: shuttle trains for cars and trucks between terminals, and through rail services. For passengers, Eurostar high-speed trains link London with Paris and Brussels. As a piece of advice to Japanese participants, Professor Vickerman added that it was important to have clear support from a range of stakeholders, both nationally and locally, to build consensus – and to deal with environmental concerns.

Mr. Jacques Marion, regional co-chair of UPF Europe and the Middle East, ended the webinar by explaining the UPF founders’ vision underlying the Japan-Korea tunnel, which would be the first link of a Great International Highway that would run through China to the west and Russia to the north, helping to create a prosperous East Asian Economic Zone. It then would extend to Western Europe on the one hand, and to the United States and Canada on the other hand, by means of an undersea tunnel at the Bering Strait. 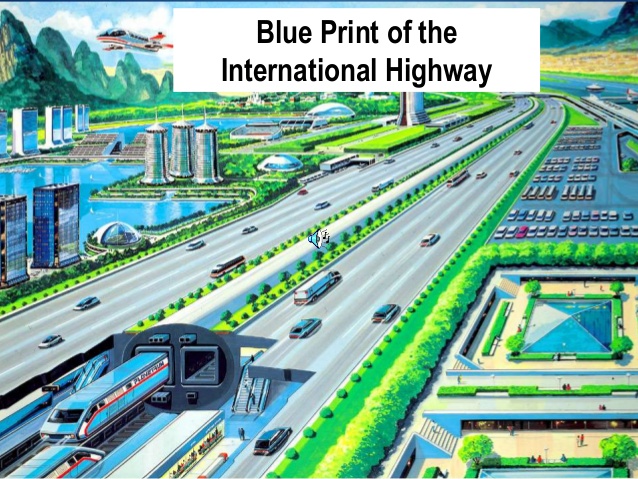 In a mayoral election campaign in South Korea's second largest and southern city, Busan, a futuristic project for an undersea tunnel linking Korea and Japan was heatedly debated against the backdrop of the sour relations between the two most democratic and free economies in the Far East.

The project idea was proposed four decades ago, as a part of an international highway vision, by the co-founders of the Universal Peace Federation (UPF), Dr. Sun Myung Moon and Dr. Hak Ja Han Moon. As world-renowned peace makers, their proposal is beyond worldly politics. It aims at harmonious bilateral relations across the strait, enhancing a possible reunification of the divided peninsula, and eventually contributing to a wider free economic zone throughout East Asia and beyond. As the election heat has now cooled, the project may now receive the calmer contemplation it deserves as it may offer one of the ingredients for the peace, stability and prosperity for the nations of East Asia.

In this webinar we would like to consider if a tunnel project can contribute to that end? In fact, the extent to which the prospects for peace, stability and prosperity can be enhanced by means of an undersea tunnel can be examined in two cases. The first is the Marmaray Tunnel (as well as the later Eurasian tunnel) across the Bosporus Strait dividing Asia and Europe in Istanbul (Turkey). It connects the two continents thanks to significant technical and economic support from Japan.

The second is the Strait of Dover where the Eurotunnel had to overcome formidable historical and political hurdles between Britain and France. Once completed, however, the tunnel transformed the area's geographic features. Even after Brexit, Britain is bound with continental Europe in every way other than the European Union’s systems.

The webinar, being prepared by the UPF’s International Association for Peace and Economic Development in Japan and Europe & the Middle East, will listen to experiences and lessons from Turkey, Britain and France as well as to Japan’s views on the tunnel project. 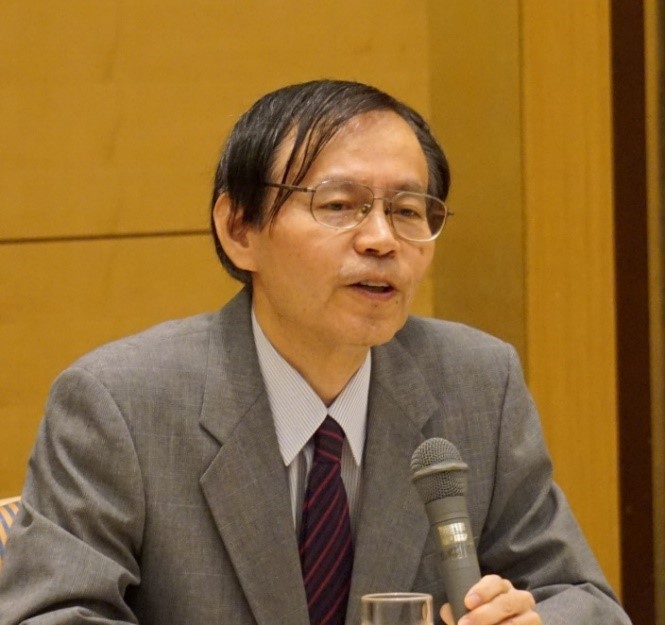 Born in Osaka in 1955. He graduated from School of Law, Osaka University in 1978 and joined the Defense Agency (present Ministry of Defense). He served in various capacities, including Assistant to the Director of Cabinet Security Council, Senior Coordinator for Director-General's Secretariat of Defense Agency and Chief of Research Office at the National Institute for Defense Studies. During that time, he earned his Masters’ degree in international relations from University of Leeds in England, as well as Ph.D. from Graduate School of Law, Osaka University. His interests focus upon international politics, political and diplomatic history and security studies. He authored numerous books, including International Politics and Military Power, Modern History of International Relations I-IV, International Relations and Japan's National Strategy in Post-Cold War Era, The Rise and Fall of Hegemonic States, among many others. Dr. Nishikawa is a professor at the Faculty of Regional Development Studies, Toyo University, since 2002.

Vice President for Strategic Partnerships for the Centrist Asia Pacific Democrats International as well as the Founder and Managing Director of Governance and Development Global. She is also Chairwoman of the Youth Committee of the Global Parties Climate and Ecological Alliance (GPCEA), which supports joint efforts to fight against climate change and the ecological crisis, encouraging green governance and further realizing the sustainable development of economy, society and environment. Previously, in 2009, she was the Ankara Representative to the International Republic Institute advancing freedom and democracy, and Consultant to the World Bank with regard to youth policies. 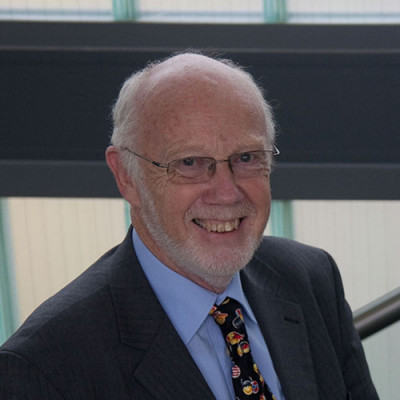 Roger Vickerman is Emeritus Professor of European Economics at the University of Kent, and Visiting Professor and Chair of the Transport Strategy Centre, Department of Civil and Environmental Engineering, Imperial College London. He has published widely on many aspects of transport and is the author of 6 books, over 200 papers and editor of 6 editions. He was Editor in Chief of the journal Transport Policy from 2010-2016 and is Editor in Chief of Elsevier’s International Encyclopaedia of Transportation to be published in May 2021. His recent research has focussed on the wider economic impacts of transport infrastructure investments, particularly high-speed rail. He has served as an advisor to Parliamentary Committees in the UK and as a consultant to the European Commission, various government departments and regional and local government authorities in the UK and worldwide. He was awarded the Jules Dupuit Prize of the World Conference on Transport Research Society in 2016.

This email address is being protected from spambots. You need JavaScript enabled to view it.