"The pandemic spread of Covid-19 virus has caused widespread alarm among the global population and reaction from various governments in a piecemeal manner reflecting the evolving knowledge of the impact and reach of the virus. Among the obvious fears of vulnerable groups is whether they will experience infection and serious and possibly fatal results but also the uncertainty of the duration of both the medical and economic effects - people are not only dying and suffering but also becoming unemployed and increasingly finding it hard to make ends meet, businesses are closing and those relying on normal social interchange are experiencing the full rigours of a lock-down seldom seen outside wartime. There can be little doubt that, even when the virus is controlled and, hopefully, combated through an antidote, the long-lasting effects on people's lives, their livelihoods and pensions will remain considerable for many years. 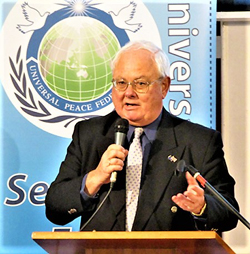 "In such circumstances it is difficult to see any encouragement - yet it is there. Neighbours are increasingly becoming aware of their responsibilities to look after the vulnerable and lonely with a number of local initiatives springing up. Moreover, set against the backdrop of this pervasive virus which, like its predecessors the Bubonic Plague, Spanish Flu and others is indiscriminate in its victims, the trend towards narrow nationalism, populism and national preferment seem minor irritants and irrelevancies.  Although we are now clinically so much better able to cope with such a disease the question remains whether both domestically and internationally we are more capable in the spheres of governance and economic management of our fragile planet.

"There is a frustrating absence of democratic global co-operation and it can only be hoped that in the light of such a terrible stimulus humanity can rediscover, as it did following the bloodletting of world wars and the fear of mutually assured destruction, a sense of global co-operation which led to the League of Nations, the UN and our current, still imperfect, world order - I am referring especially to the global optimism and sense of urgency engendered in the 1960's and 1970's. It is arguable that through an international body representative of all the nations (in addition to the ad hoc G20 etc) and the Bretton Woods financial bodies as well as trade and climate treaties we have already the institutions for global decisions. Yet these are not yet equipped with the authority needed to be able to deal with a pandemic or the other global issues which confront us. They remain inhibited by the belief that nations can best serve their own interests individually rather than collectively, that humanity is not one entity but still separated into conflicting and conflicted groups divided through ethnicity, race, religion, culture and language. Although our trade and financial transactions are global our attitudes and manipulation of them are national and local with consequent disruption.

" At UPF we confront these notions and refer, instead, to our key message emphasising 'interdependence, mutual prosperity and universal values'. We have an unshakeable belief that it is only through international co-operation, partnership on the basis of mutual trust and sharing equitably our planetary resources as well as the concept of one common humanity to which we all have obligations of care and concern that we can bring about a new era in human and global development.

"I am not alone in having frequently expressed the hope that it will not take another global conflagration for us all to be brought to our senses and pursue these beliefs. Maybe, it is just possible, that we are now seeing another form of devastation beyond our immediate comprehension that will engender that sense of common responsibility and the need to enshrine that in binding, effective governance structures that will make the tragedy of these current circumstances be remembered not just as a disaster but as a new beginning."