The theme of this conference is achieving peace through interdependence, mutual prosperity and universal values.  For me the best extant example of interdependence is the EU which enables the tariff free movement of goods between member states and enables just in time delivery without the need for warehousing of spare parts. 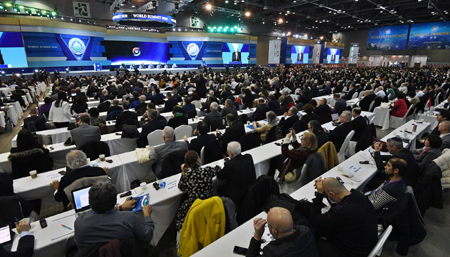 It is, also, as has been already described, the largest European peace project of any time.  My generation is the first in more than living memory which has not been required to kill our fellow European citizens.

This audience will well understand the importance of mutual prosperity and how any imbalance in wealth in post individual countries and the world creates a sense of resentment and it is a potential for conflict.  We should not underestimate the cost of this and, indeed, in reference to unification of North and South Korea the cost of bringing those countries together.  We have the example of the unification of Germany many years ago for which the German economy is still paying the price of the brave decision to create parity between the D-mark and the Ost-mark without considering here the wider implications of the merging of two political systems and the consequent impact of that on any unified country, especially a democracy.

We now have a well-established set of universal values enshrined in the Universal Declaration of Human Rights which, when introducing it at the UN, Eleanor Roosevelt hoped would be regarded as a global Magna Carta.  In the wider Europe we have the European Convention on Human Rights and many of those provisions have now been incorporated into EU law through the Charter of Fundamental Rights.  These values may have had as their origin Judaeo-Christian ethics but they are now regarded as secular and therefore universal and capable of support from all countries and all religions.  I acknowledge that there is an issue on the interpretation of human rights which, fundamentally, is a difference between the emphasis on the individual in the West and the collective in the East.

Yet if we are to be peace activists and not just observers we must do more.  We look around our troubled world and see that there are many places of actual or potential conflict much of which is created through barriers and borders, many of which are the result of territorial aggrandisement or flawed treaty provisions often imposed by a victor on the vanquished: we can look at the treaties of Versailles and the Congress of Vienna as examples of the conclusion of a period of war which, rather than entrenching peace, were causes of future conflict.  But we sea walls and created a along the Rio Grande a, by now mercifully no longer one across the city of Burnley and separating the two parts of Germany, one constructed in Hungary against the flow of refugees and, of course, the one that separates Bethlehem from Jerusalem.  These may have the temporary effect of preventing unwanted or unlawful migration flows and even terrorism but they are no basis for a lasting peace.  We have seen dangerous conflict arise from the definition of borders such as in the Donblas region of eastern Ukraine and in Kashmir: if you go to India or Pakistan and look at a map you will still see the hatched line of a disputed border between those countries which has been in existence since partition more than 70 years ago and, of course, a we have the demilitarised zone (DMZ) here in the peninsula of Korea.  Now I am no reckless iconoclast and recognise that tearing down borders can create even further chaos.  Indeed, our only effective international organisation, the UN, is based on the nation state.  Nevertheless, where those borders divide linguistic, ethnic, cultural and historic links, as in the peninsula of Korea, I assert that they are dangerous and are a principal potential source of conflict.

What can we do as individuals and as an organisation?

We are here under the auspices of the late Rev Moon who gave us our theme of one humanity under God based on the firm foundation of the family. That is a unifying message for all humanity but Rev Moon looked not only for reconciliation but actively stretched out the hand of friendship and understanding. I am always disappointed how so often in negotiations seeking compromise, whether at the family, community, national or international level, so few protagonists make sufficient effort to understand the other person’s perspective and background, why they may hold dear to certain issues and what drives them to their position.

In my military days when I sat looking across what was then the Inner German Border down the barrel of a gun at the Soviet Third Shock Army, several divisions deep, I was struck by how little each side knew of the other’s strategic let alone tactical intentions. The massed troops of the Soviets, mostly poorly trained and equipped conscripts, were seen against much smaller numbers as a threat by the West whereas the Soviet side saw the West’s technological superiority as the threat. Their philosophy enshrined in the doctrine of Marshal Georgi Zhukov had not changed since the Second World War, namely that equality of arms meant a force of three or four to one in their favour.

As a barrister I am trained to understand my opponent’s weak and strong points so I know what to exploit or recognise as limits in my own case. It is a good discipline. We must also reach out. Over the doorway of Coleg Harlech in West Wales where I studied the Welsh language there is a motto “Bid ben bid bont” – who would be a leader must be a bridge. That is true, as I have said, in our everyday lives let alone in the wider world. If we can conclude at the end of each day that we have created or facilitated a bridge between ourselves and others of between others themselves then we are practising putting peace into action. I have an image of those wonderful Chinese and Japanese gardens in which lots of small islands are connected by little bridges and all of them are inter-connected. That is the way we must approach the building of peace to create in reality that dream of one human family.