Reconciliation and Peace Building in a Time of Increasing Polarisation

On November 7th, Universal Peace Federation (UPF) UK with Women's Federation for World Peace (WFWP) UK and the help of Initiatives of Change, is considering, ‘Reconciliation and Peace Building in a Time of Increasing Polarisation: The Need for Cooperation Between Politicians and Faith Leaders’

With participants from Ireland, Sweden, France and largely Birmingham and the South East of the UK there was a good range of faiths, nationalities and racial backgrounds reflecting the multi-cultural nature particularly of UK cities. The most moving testimonies were from Michelle and Thomas Kelly. Invited to speak by the Initiatives of Change,  Michelle Kelly spoke of how she had overcome great anger and bitterness towards the British army and the Police during the conflict over Northern Ireland. Her faith helped her to overcome traumatic childhood experiences including the loss of her Uncle who was killed on Bloody Sunday and scary night raids on her house by police and soldiers.

Her husband Thomas shared how his artwork had helped him to channel his desire to actively promote peace. His artwork has been exhibited around the world and many of the Cathedrals in the UK. It is a way to create a dialogue with those come from opposing communities. 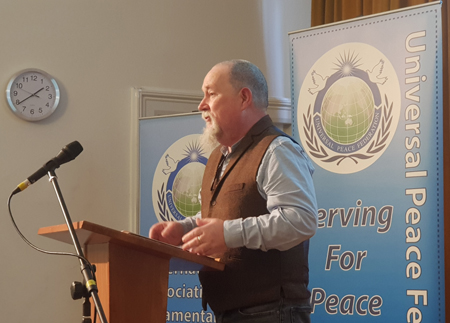 A number of the faith leaders have been long standing friends of the UPF and WFWP. They always bring considerable wisdom and experience to the podium.

Introduction to UPF by Video of February 2019 World Summit 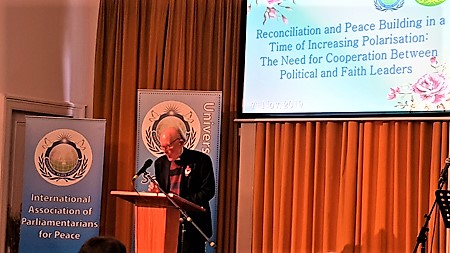 He is a retired Anglican parish priest, living near Oxford, England. He has been involved in interfaith work for over fifty years, joined World Congress of Faiths in 1964 and has served as Hon. Secretary, Editor, Chairperson and now, as Joint President. He was Executive Director of the Council of Christians and Jews from 1984-8, and is a Co-Founder of the Faith and Belief Forum(formerly the Three Faiths Forum), Patron of the International Interfaith Centre at Oxford and a Peace Councillor. Author of many books. Friend of UPF and preceding organisations since the 1980’s.

Justice Anup Singh Choudry (video link) is a Sikh writer, scientist and Lawyer by background. He was born in Uganda, educated at Loughborough College and Cambridge University and retired as a High Court Judge in Uganda. He served in the War Crimes Court in Uganda and his experience inspired him to edit an authoritative volume on the 1984 Sikh genocide.

Sheikh Dr Hojjat Ramzy (Video Link) is the Director of the Oxford Islamic Information Centre and the Muslim Chaplain at Oxford Brookes University. Born in the Middle East, Sheikh Ramzy has lived in Oxford for over 30 years. He holds an undergraduate degree from Oxford Brookes University and completed further Islamic studies at Markfield Institute in Leicester. As an Islamic scholar, he has worked with several governmental and non-governmental organisations and with religious leaders of all faiths. He established the Oxford Islamic Information Centre to provide accurate and accessible information about Islam with a view to promoting understanding, peace and brotherhood within the local and national community. 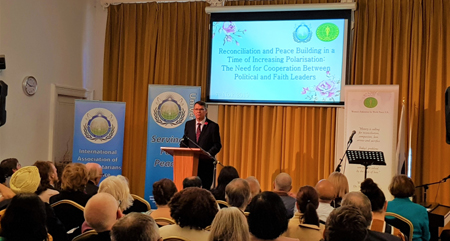 Questions and Comments from Participants

He is an award-winning entrepreneur, founder and CEO of the youth network Shout Out UK, a company he set up at 22. In April 2015, Matteo was responsible for launching Britain’s first ever Youth Leaders’ Debate, a collaboration between Channel 4 and Shout Out UK. The event gathered all 7 leaders of the largest British parties’ youth wings to debate on political issues. After just ten minutes, #YouthLeaders was trending in the top 6 on Twitter. Matteo was invited to become an ESRC (Economic and Social Research Council) Knowledge Exchange Fellow in May 2015, after winning a bid for a research/marketing grant in cooperation with the Crick Centre, a research group based at the University of Sheffield. Half a million viewers watched the resulting videos. In March 2016, Matteo was declared the winner of the Harrow Business Den 2016. Later that year, his company became an accredited AQA centre and launched its first version of the Political Literacy Course, a unique programme that teaches young people politics, a subject currently missing from the national curriculum. He argues that youth political apathy has led to an inter-generational divide in policies with Government policies favouring the over 50's because of their propensity to vote in higher numbers. It is also partly due to the absence of preparation of young people during their school education for their duty as citizens. Issues such as Brexit, University Tuition Fees and Climate Change have compelled more young adults to be politically active.

Abdul Basit Syed: (Video Link) He commented on the conference as well as emphasising the importance of a world level Moral Education Day under the auspices of the United Nations.

The Conference considered the theme – ‘Reconciliation and Peace Building in a time of increasing polarisation: The Need for Cooperation Between Political and Faith Leaders’. It explored, from both political and religious perspectives, how reconciliation and constructive dialogue can bridge the growing divide between opposing sides in an age of populist politics and promote consensus building in the public space of our nations.

The conference will explore, from both political and religious perspectives, how reconciliation and constructive dialogue can bridge the growing divide between opposing sides in an age of populist politics and promote consensus building in the public space of our nations. The second session will include politicians and young leaders.

Front page image of reconciliation between Jacob and Easu by Reubens.

Comments on the conference:

It is good to be with you all and I am grateful to the Universal Peace Federation and the Women’s Federation for World Peace for inviting me to share in this meeting, which with the Election ahead is even more important.’
As many of you know proceedings in the Houses of Parliament usually begin with a Christian prayer – often the Lord’s Prayer - the apostrophe after the ‘d’ (Lord) not the ‘s’(Lords). And I thought the words of Jesus are a good basis or manifesto for Reconciliation and Peace Building:
The opening words ‘Our Father’ affirm that there is One God and Father of us all – whatever name we give to the Holy One. As a hymn puts it,
He enfoldeth all the world in one embrace
With unfolding grasp is holding,
Every child of every race

Thy kingdom come on earth as it is in heaven is an expression of hope, which is important at a time when there are many doomsday predictions. As an eight year old wrote:
When tomorrow I open my eyes
I should like to hear the news
All the children in the world
Are praying for that Peace, the redeemer, has come.

God’s kingdom is a kingdom of justice and peace. We are called to ‘loose the chains of injustice… and to set the oppressed free.’ It is agonizingly difficult to know when military action is indeed serving the cause of justice and truth. Looking back to my National Service during the troubles in Cyprus, I felt then that we were trying to stop conflict between Greek and Turkish Cypriots – and indeed when we left there was fighting which led to the division of the island. We were always armed, outside the camp. I am thankful, I never had to use my pistol – practising with bayonets on sacks of hay was bad enough: but could I have lived with killing someone? It is no surprise that some 17 per cent of those who in Afghanistan have been in a combat role suffer from post- traumatic distress. And to obey an order to kill another person one has first to dehumanise the other person. The Nazis spoke of Jews and homosexuals as vermin and like, rats, they needed to be eliminated. Language is so important and I hope all engaged in the election campaign or who watch football remember this.
Demonizing others creates dangerous polarisation. As has been said ‘If they burn books now, they will burn bodies next.’
Give us this day our daily bread. But who are us. Our prayer falls short unless by ‘us’ we mean all the people in the world – the millions who are hungry and homeless. God calls us in Isaiah’s words ‘to share our food with the hungry, to provide the migrant with shelter and when you see people who naked, to give them clothes.’
Forgive us when we do wrong and teach us to forgive others who hurt us. We need to tackle the causes of war, but we need also to heal the both the physical wounds and the bitter memories. Here, I think faith communities could make a vital contribution to healing the wounds of conflict. As the Civil Rights leader Martin Luther King said, ‘Love is the only force capable of changing an enemy into a friend.’ Forgiveness does not change the past – forgiveness changes the future. I still remember meeting some coloured people in the New South Africa, who, under the apartheid regime, were forcibly moved from their homes, and dumped miles away on a barren strip of land and told to make new homes there. They still came back each Sunday to their old church. I asked them how they felt about the past and they replied, ‘We must forgive as Jesus has taught us.’ They showed no bitterness. To forgive and to allow ourselves to be forgiven, is an essential step towards peace.,
May we not be lead into temptation. The greater the influence or wealth we have, the greater the temptation to abuse our power. I remember Lord Weatherill, a former Speaker of the House of Commons saying, ‘What is morally wrong is never politically right.’ This is not just a message to politicians – sadly it is also a message to church leaders, to the press and to many others. As George Eliot said, Our words have wings, but fly not where we would. What we say can never be unsaid: what we do cannot be undone.

For thine is the kingdom, the power and the glory. Seeing on television the horrific suffering of innocent children or in one’s own life facing up to tragedy, it is natural to ask, ‘Where was God?’ I felt this question acutely when not long ago my wife Mary and I after a UPF conference visited the Concentration and Prisoner of War Camp at Mauthausen. Mary was asked to lay a wreath and I was asked to say a prayer. But what can you say to God in a concentration camp> But I remembered my friend Rabbi Hugo Gryn, whom some of you will remember from the Moral Maze, saying the question was not ‘Where was God, but where was humanity.’ God does not override our human freedom, but asks us to share in ‘the healing of the nations.’ The Dalai Lama, who has known much suffering, often tells us, ‘Do not give up’; ‘Do not give up.’ God never gives up on us.

By what we say and by how we live, we can either increase polarisation or decrease it. Each of us can make a difference. ‘Dear God, change the world and begin with me.’
Marcus Braybrooke November 2019