Peace and Development in the Balkans

The Session 'Peace and Development in the Balkans: The Role of Business, Entrepreneurs and Investors' was graced with the presence of a number of regional former Heads of State in audience. The panel was composed of three former Ministers of Finance. Many on the panel had experience in international financial institutions.

The Session Chair was Abdul Basit Syed, an International Ambassador of Croydon, U.K. and Founder & Chairman of World Humanitarian Drive. He asked the rhetorical question: "What does a peace organisation to do with trade? Promoting integration of economies opens ways for peace. The Balkan region is moving from war to peace through trade." (Video Link)

He continued, "This sends a strong message to the rest of the world that this region has achieved the maturity to cooperate and collaborate beyond borders. There is huge potential in this region with a European culture, a favourable tax regime and high skill level." He commented that investment and the rate of new business startups is not sufficient at the moment. "A safe, sustainable growth with a stable Government and inclusive economics are needed. Growth should benefit all of society. The economic strategy should advance structural reforms beyond borders. Peace between nations in the West Balkans is providing economic developments for all." (Photo Abdul Basit Syed Speaking)

Prof. Arben Malaj, former Minister of Economy and Finance, Albania, graduated in Finance at the University of Tirana, Albania, he attended the Harvard Kennedy School (HKS) as Senior Fellow at M-RCBG, focusing on research into Western Balkans European integration. Prof. Malaj is currently serving as the President of the Institute for Public Policy and Good Governance. Since 2016, he has been a Member of the Supervisory counsel of Bank of Albania. Video Link

He began by congratulating Universal Peace Federation that it had chosen the land of Mother Theresa to convene this conference. She was famous for saying we may not be able to do big things but we can do the small things every day. He also referred to Winston Churchill's quote that, “the Balkans creates more history than it can consume.”

European integration through negotiation and cooperation is a good model for former Communist nations. The present and the future inspire us to collaborate for a better future. It is intrinsically linked that ‘without peace there is no prosperity and without prosperity there is no peace’.  We must increase the range of opportunities for all our citizens throughout the Balkans for peace to be strong.

The multi-lateral successful collaboration can overcome the difficulties of the past and bring sustainable development. Robert Schuman saw that cooperation between European nations would bring the peace in Europe that had been so elusive and allow development. Where there can be trade wars there also can be trade collaboration by which development can be facilitated. (Photo below Professor Arben Malaj speaking) 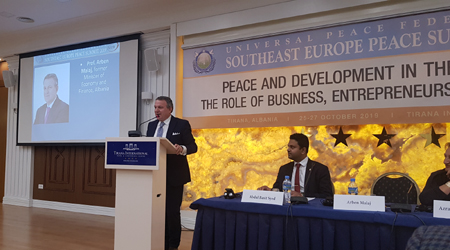 Hon. Azra Hadziahmetovic, Member of Parliament, Former Minister of Foreign Trade and Economic Relations, Bosnia and Herzegovina.  Video Link She obtained her Ph.D. in International Economics. Since 1979, she has worked at the University of Sarajevo, School of Economics and Business. A former Minister of Foreign Trade and Economic Relations, she served several times as a member of parliament in B&H and in the Council of Europe. She also served as a Governor in World Bank and Alternate Governor in the IMF. She is a member of the Committee for Economic Science ANUBiH, the Academic Network of the WTO and the Global Development Network.

In 1992, due to the conflict, 70% of houses, 60% of hospitals as well as infrastructure, were destroyed. In 1999 - 2008 the Stability Pact for South Eastern Europe was agreed and implemented with the EU.

In 2006-7 most of the West Balkan nations joined the Central European Free Trade Agreement (CEFTA).. With trade liberalisation there has been increased stability. There are economics of scale developing. This is necessary for EU integration and EU membership.

The Free trade agreement is an important part of accession to EU. Lord Peter Mandelson (the EU Trade Commissioner at the time) agreed that CEFTA will not only offer real economic benefits but also send a signal that integration of the region is possible and it will open a way for accession to the EU.

More ambitious targets have naturally developed as well as more important trading partners. Western Balkan regional economies have not fulfilled their potential in exports to the EU yet but are making efforts to catch up.

CEFTA has had a very good benefit to the region but the regulations of the EU and other regional Government takes a lot of business time. A higher export led and FDI driven growth is part of the strategy of 2020 but the nations of the West Balkans are falling behind. (Photo Below Hon. Azra Hadziahmetovic Speaking) 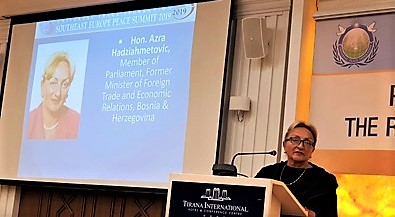 Mrs. Jolanda Trebicka, President, Europartners Development, Albania has experience working with the World Bank, the Government of Albania and OECD. She has worked both on the macro economic policy forming level and on the financial management at the local Government level.  Video Link

The business community is demand driven and pushes the government to make changes in its policies to allow business to thrive.

The lack of opportunities pushes people to engage in illicit activities to support themselves where there are no jobs. A terrible example is that some joined ISIS because of the lack of money. They knew they would be paid if they joined.

There are two reports on the Albanian economy during the years 2012 – 2019. There was progress during these years. Foreign Direct Investment (FDI) grew by 80%. New enterprises started and progressed.

Yet intra-regional trade had 0% growth over this period! This is of great concern because of the need for regional integration. Why are we at a zero level of growth still at 9.6 % cooperation instead of 14.3% (the target for this 2019).

How much does the Government dialogue with business? She found through surveys that business does not believe Government is listening to their concerns. Business can break barriers to trade but only Government has the role to remove them through negotiation and legislation. (Photo Below Mrs. Jolanda Trebicka Speaking) 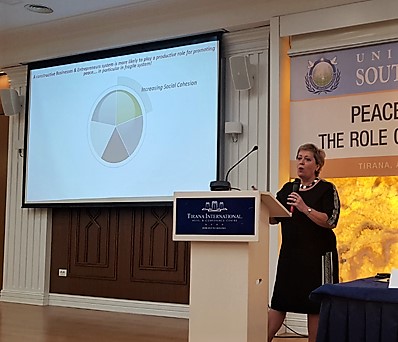 Hon. Haki Shatri was born in Tomoc, Istog, Kosovo. He graduated from the Faculty of Economics at the University of Pristina and completed his postgraduate studies at the Faculty of Economics of the University of Zagreb in Croatia. After obtaining his Ph.D. from the European University of Tirana, he conducted research at the Reinvest Institute, the oldest “think tank” in Kosovo operating since 1995. Dr. Shatri was a Member of the Assembly of Kosovo for Five years and Minister of Economy and Finance in the Government of Kosovo from 2004 to 2007. He is currently serving as an Advisor to the Prime Minister of Kosovo.

From 1989 Kosovo was under the administration of the United Nations. This was the time rebuilding started. Ten years later there was a transition to becoming a nation. Free market principles are embedded in the Kosovan constitution, however, we still have too many people under the poverty line.

Free market liberalisation has been implemented at stages with the EU support and advice promoting regional integration especially during 2016 – 2021. There is a strong pathway of reforms to be implemented.

Public budget debt is approximately 1bn euros which is about 70% of GDP. This is close to the border where it could become a problem. 25% of Kosovans live abroad and support their families at home through remittances. Remittances from the diaspora in 2017 were just under 800 million Euros. FDI is at a comparably low level. We need to make it easier to invest.

We are a good case to attract foreign capital if you consider that tax on profits is between 0% - 10%. On the other hand, the non-liberalisation of visas by the EU is a big problem. It is an obstacle to trade. (Photo Below Hon. Haki Shatri Speaking)

Session Backgrounder: Economic development, leading toward mutual prosperity, is necessary for a true and lasting peace. The United Nations Sustainable Development Goals underscore the need to bring an end to extreme poverty and to promote good governance and policies that contribute to economic development, raising the standard of living for everyone. In this session, panellists will consider the ways in which economic development can be expanded throughout Southeast Europe, harmonising global strategies with local needs. Are there region-wide policies that could be adopted that will enhance cooperation and trade? How do government policies and practices enhance or hinder economic development in the region? What kind of investment is needed to stimulate development?