A Universal Peace Federation World Summit was convened in Europe for the first time on October 25 - 27th, when the Co-Founder of UPF, Dr Hak Ja Han Moon, 16 former Heads of State, 400 Summit dignitaries from 50 nations, with 15 partner organisations, gathered in Tirana, Albania. 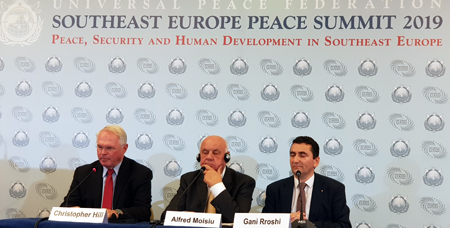 The wide-ranging series of activities began with a Press Conference on Friday 25th of October featuring former US Ambassador Christopher Hill, and HE Alfred Moisiu, President of Albania (2004 – 2007) who addressed a Universal Peace Federation (UPF) Press Conference in Tirana, Albania today, to introduce its upcoming South East Europe Peace Summit. A former Special Envoy to Kosovo and Ambassador to Albania, Ambassador Christopher Hill explained that the themes of the UPF conference, ‘Peace, Security and Human Development in South East Europe’, while there had been welcome progress, were still needed in the Balkans.

Expressing his support for the late Dr (Sun Myung) Moon’s initiatives, continued by his wife Dr Hak Ja Han Moon, Co-Founders of UPF, President Moisiu described the scale of the Summit as a first for UPF in Albania. The Summit will include 3000 participants, including many prominent figures, from 50 nations. It will partner with 17 other influential groups such as the Podgorica club of former Heads of State in the Western Balkans, and the Youth Summit will feature 2000 youth from many nations to engage in dialogue and other activities. On Sunday a Family Festival will convene to celebrate that ‘sound families make a sound nation’.

Gani Roshi, Secretary General of the Organising Committee, added that Albania had been chosen for this Summit because it had three values: its strong family values, its tradition of inter-religious harmony and the extensive network of prominent ‘Ambassadors for Peace’ throughout the nation.

Below are some of the details of the programme: 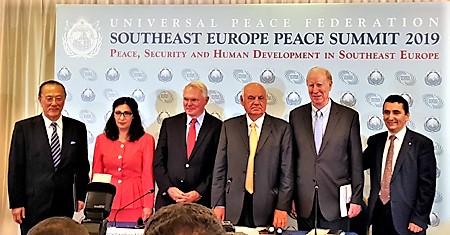 Toward Peace In Southeast Europe

Opening Panel: Perspectives for Peace in the Balkans

Twenty years after the conflicts that reconfigured the region after the end of the Cold War and the breakup of Yugoslavia, the Western Balkan nations are facing the process of EU integration, the challenge of regional cooperation, and pressure from competing international interests. Assessing challenges and opportunities on the national and international levels, panellists will give their perspectives and recommendations for peace and development in the region.

Launch of the International Summit Council for Peace (ISCP)

"Albania has become 'Heavenly Albania'. Albania can take the lead in Europe in becoming one family under God." Dr. Hak Ja Han Moon Co-Founder of Universal Peace Federation, declaring Heavenly Europe with the inauguration of the European International Summit Council for Peace at the Southeast Europe Peace Summit. Eight current and former Heads of State were presented with International Summit Council Medals during the inauguration ceremony.

Peace Road Balkans is a project of UPF involving young people, parliamentarians, city mayors and civil society leaders, aiming to overcome prejudice and create positive interation among youth and leaders in the Balkans region. Through cycling or riding for peace across borders, the Peace Road project contributes to realize the UPF Founders’ vision of an International Highway for Peace across the globe.

The International Summit Council for Peace provides a meeting place for current and former world leaders to share the wisdom and experience that are needed to find lasting solutions to the critical problems of our time. In this high-level panel, former heads of state and government from the Balkans and the greater region will offer their vision and recommendations for building peace, security and human development in Southeast Europe.

Education is the fundamental means for building a culture of peace. The UN promotes education for sustainable development, teaching attitudes and skills aimed at realising environmental integrity, economic viability and a just society. To achieve these goals, there is a need for character education that teaches individual morality and good citizenship. In the context of Southeast Europe, which education policies contribute to regional cooperation and understanding? Panellists will discuss their vision for education and best practices contributing to peace and human development.

Session III-a: Addressing Critical Challenges of Our Time: The Role of Parliamentarians

Representing the people, respecting the rule of law and upholding human rights, parliamentarians play a central role in searching for innovative solutions to the critical issues faced by their nation, their region and the world. In this panel, members of parliament from Europe and the Middle East will share their experience, their vision and their recommendations for a future of peace, human development and social justice in Southeast Europe.

Session III-b: Addressing Critical Challenges of Our Time: The Role of Men and Women Faith Leaders

Religious leaders and faith-based organisations play a significant role in bringing about reconciliation and a culture of peace. By working together with political leaders, their moral authority and their emphasis on respect for human rights and dignity provide valuable resources for achieving a just and peaceful society. In this panel, religious leaders will explain how their faith helps transcend social conflicts and foster social development. Women panellists will describe how women faith leaders can play a unique role in developing a peaceful society and community.

Organised by Women’s Federation for World Peace (WFWP) International, the event will feature remarks by WFWP International President, the presentation of awards to women leaders and artistic performances.

Family values are a great resource for peace building. However, family traditions can also purvey prejudice, defining ethnic or cultural solidarity in such a way as to foster adversarial historical relationships. There is a need for family traditions to promote solidarity in the wider society. In this light, several questions arise:  What kinds of government policies can most effectively support and strengthen the institution of family? On the other hand, how can family values support democratic aspirations for good governance? How can we encourage families to consciously cultivate principles of interdependence, mutual prosperity and universal values, so that family culture will become the basis for a shared culture of peace?

Session IV-b: The Challenge of Migration: Perspectives from EU and Southeast Europe

According to UNHCR, 15,000 people have risked their lives to reach Europe by sea in 2019. The figure recalls tragedies and reflects a crisis that may only be worsening, considering demographic, climate, security and social conditions in Africa and the Middle East. The situation requires Europeans to show more solidarity and apply a founding principle of the European Union: the principle of substitution, meaning that decisions must be made at the European level in terms of capacity and harmonisation of resources in response to the urgency of the moment, compelling European partners to consider with the same empathy those men, women and children trying to reach their coasts, whether they are called "migrants", "refugees" or "asylum seekers". In this challenging equation, Southeast Europe, which, despite persistent requests is not yet fully integrated and seems increasingly distant from the EU, stands on the front line.

The conflicts and tensions of today's world put all religious traditions to the test, as not just individuals but whole cultures find themselves mistrusting each other. Yet there are places where faith communities respond to suffering and confusion with one united voice of compassion, virtue and exemplary service. Instead of competing in the "salvation market," they have discovered that they are each other's most natural partners, sharing both vision and values. They tackle the wounds of war through reconciliation programs, seek to prevent conflict and violence through experiential and awareness programs, or bring the youth of the world's cultures together, building understanding, respect and trust.

One of the most culturally rich and beautiful areas of Europe, the Balkans have also been a region of strife among religions, nations and ethnic groups. The conflicts that followed the fall of the Iron Curtain and the collapse of Yugoslavia added to the historical burden, leaving deep scars and lingering resentment. In order to resolve these underlying problems, a new type of leadership is needed to create bridges of cooperation, reconciliation and peace. Concerned about creating a peaceful future for their families and their nations, women are called to advocate and engage for the rights and dignity of all people in their public leadership roles as well as in their homes. By working together to create a peace culture rooted in core values, investing with the passion and labour of love of mothers, wives and daughters, they can give hope to heal, build and transform.

Session V-b: Media in the 21st Century: Challenges and Opportunities

This panel offers a platform for European media experts, civil society representatives and politicians to discuss the following themes:

1. Press freedom in Europe and the Middle East and threats of censorship - assessment of the current situation based on the Press Freedom Index by Reporters Without Borders.

2. Freedom of speech and media responsibility for quality management, integrity, and ethical standards in reporting: seeking a common understanding and concrete guidelines.

3. The rise of the Internet and social media: challenges and chances for an engaged civil society on local, regional, national levels.

4.  Can the International Media Association for Peace, which is scheduled to be launched at the World Summit 2020 in Seoul, Korea, be a platform for promoting peace and reconciliation in our region?

Session V-c: Peace and Development in Southeast Europe: The Role of Business, Entrepreneurs and Investors

Economic development, leading toward mutual prosperity, is necessary for a true and lasting peace.  The United Nations Sustainable Development Goals underscore the need to bring an end to extreme poverty and to promote good governance and policies that contribute to economic development, raising the standard of living for everyone.  In this session, panellists will consider the ways in which economic development can be expanded throughout Southeast Europe, harmonising global strategies with local needs.  Are there region-wide policies that could be adopted that will enhance cooperation and trade? How do government policies and practices enhance or hinder economic development in the region?  What kind of investment is needed to stimulate development?

In this closing session, panellists will share their perspectives for peace and development in Southeast Europe with regards to the current geopolitical context.

The family is the basic institution of social life and a key factor of social cohesion. It is where children learn language, culture, ethics, values, and attitudes toward others. Thus, the family is called a "school of love" and a "school of peace". The festival will feature a ceremony of marriage re-dedication to be officiated by the UPF co-founder, Dr Hak Ja Han Moon, bringing together couples from throughout Albania and participants from Europe and the Middle East region. The festival will conclude with entertainment by young artists representing different cultures from the region.