Universal Peace Federation - UK (UPF-UK) has been recognised as a Charity by the UK Charity Commission. Briefly summarised, the agreed Objects of the charity are: First, the promotion of national and international conflict resolution and reconciliation. The second set of objects are to promote racial and religious harmony and peaceful co-existence between people of different religions, cultures, races and nations. (For the detail read more below.) 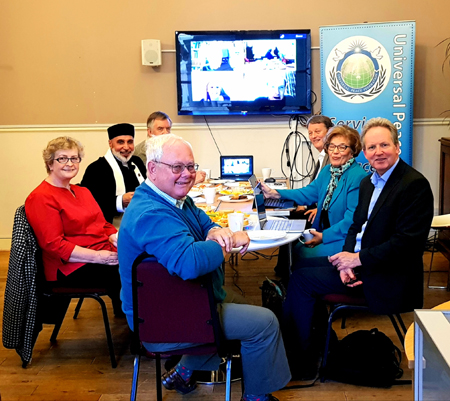 Photo above is of the first Trustee meeting since achieving charitable status.

Keith Best, Chair of UPF-UK, said: "UPF-UK is part of the wider global movement which has done so much to bring reconciliation and understanding to many areas of conflict in the world and has been recognised as such. I am pleased that in the UK we can now add our activities to these initiatives by bringing together people from different traditions, positions and religions. By doing so we can examine and confront the causes behind domestic, national and international conflict and racial and religious disharmony and seek ways forward building strength and cohesion in our troubled society and world.  The results of our discussions and research will be available on our website as sources for others to use."

Universal Peace Federation International was inaugurated in September 2005 by the late Rev. Dr. Sun Myung Moon and Dr. (Mrs) Hak Ja Han Moon with the goal to spread awareness of the human race as one family embraced by a loving God. It is now a global NGO with General Consultative Status in the Economic and Social Council of the United Nations making it one of only 140 NGOs worldwide with this status. UPF – UK has been a company limited by guarantee since 2008.

Universal Peace Federation - UK's Charity Number is 1185412. The objects of the Charity are:

Promotion of racial and religious harmony:

3.7 The promotion of racial and religious harmony and peaceful co-existence between people of different religions, cultures, races and nations for the benefit of the public by:

3.8 Educating the public in the different backgrounds, religious and other beliefs, held by different religious, racial cultural and national groups to promote mutual respect and provide a basis for dialogue;