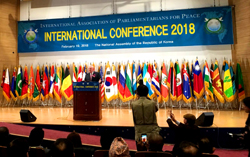 The Universal Peace Federation (#UPF) held an International Leadership Conference (ILC) in Seoul, South Korea from the 18th to 21st of February. Featuring the UPF’s recent initiatives, the International Association of Parliamentarians for Peace (#IAPP) and the Inter-religious Association for Peace and Development (#IAPD), the ILC considered strategies that could resolve difficult world issues. One Session entitled, “The Vision and Role of the IAPP for the Settlement of Peace on the Korean Peninsula” was convened in the conference hall of the Korean National Assembly Members with over 150 parliamentarians from 70 nations participating.

Dan Burton, former US Congressman from Indiana and Co-Chair of the IAPP, explained the role of the International Association of Parliamentarians for Peace at the ILC saying, 'This global association of Parliamentarians seeking to manifest the highest ideals of selflessness and addressing the greatest problems facing humankind today: Violent conflict, terrorism against innocent civilians, abject poverty and a deteriorating natural environment. These are the most altruistic ideals it is possible for an international group of parliamentarians to undertake.

For a group like this to do any good it must be broadly international in its membership. The reasons are obvious. The scale of everything is globalised and it has been that way for a long time. Smoke from one country affects many others. Water pollution must be controlled for humanity cannot survive without clean water. Chemical sludge and islands of plastic pollute our rivers,  streams and our oceans. The plastic is eaten by the fish we eat!'

Former Speaker of the Philippines' House of Representatives, Jose De Venecia (Video) gave a Keynote speech at the Universal Peace Federation International Association of Parliamentarians for Peace (IAPP) Conference at the Korean National Assembly. He is currently the International Co-Chair of the IAPP.

The IAPP delegates from 70 countries hope that the 2018 Winter Olympics in Pyeongchang will serve as a substantial opportunity to resolve the North Korean nuclear issue and improve North-South relations. Beyond the Pyeongchang Olympic Games, the 2020 Summer Olympics in Tokyo and the 2022 Winter Olympics in China will stimulate relations between the leaders and national parliaments of Korea, China and Japan, with a view to furthering the prosperity of Northeast Asia and the realization of world peace. Furthermore, Korea, China and Japan are strongly urged to sign the agreement of the “Peace Road Project,” linking the undersea tunnel project between Korea and Japan and the Korean peninsula railroad system with the Eurasian railroad and transportation network. The parliamentarians attending the 2018 International Conference clearly offer their active support and cooperation for the above-mentioned undertakings.

The ILC is being held at the same time as a series of events to commemorate the birthday of the Founders of UPF, the late Rev Dr Sun Myung Moon and Dr Hak Ja Han Moon. The events of the affiliated organisations are being convened in the Gapyeong Cheongshim Peace World Centre.

The International Conference on the Unity of the Sciences will also be holding a conference during this time. It has a distinguished past with Nobel Laureates and many internationally renowned scholars gracing its panels, publications and working boards. This years conference represents another step in the  revival of its illustrious past.