We would like to invite you to a public debate on ‘Young People Countering Hate Speech’ which will be held on 5th August from 10 am to 12.30 pm at Universal Peace Federation - UK

The debate is part of the National Training Course on Human Rights Education sponsored by the Council of Europe, under their Human Rights Education programme. The training is organised by AICEM, Euromernet, YouthLink Scotland, Asha Foundation, and UPF in cooperation with the Governmental programme on Hate Crime and Stop Hate UK, and will take place from 1st to 7th August 2016 and will gather 25 participants selected among the UK -based organisations working with young people and human rights issue.

Objectives of the Debate

• To give concrete tools to be used at local and national level for tackling hate speech, 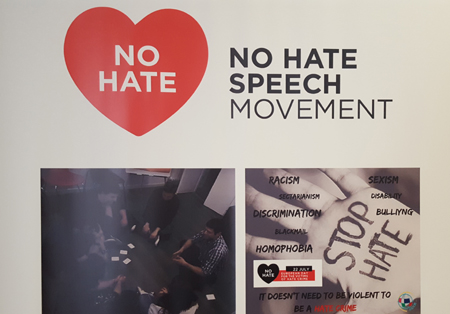 • To identify measures to prevent, counter, report and remedy hate speech, notably through Governmental programme on Hate Crime, the No Hate Speech Movement (NHSM) campaign, the EDC/HRE Charter of the Council of Europe, and other relevant instruments;

Programme of the Debate

10.30 Introduction to the Programme and the Training Course

10.45 Presentation of the Speakers

The general aims are to promote Human Rights (HR) among young people and their role as citizens, to contrast discrimination based on religion background in the process, both offline and online and to exercise and defend democratic rights use them to engage and influence political decision related to HR and HRE. The course also aims to empower youth workers of our local partner in UK with tools and methodologies regarding HRE in order to start a common campaign in UK and to support participants to implement concrete actions through their organiations, implementing new projects and positively influence local authorities on the importance of HRE. The aim is also to give concrete tools to be used at slocal and national level to fight hate speeches, promote HR and intercultural and interfaith dialogue: in particular in this period of big fears related to terrorism and extremism.

The Council of Europe’s No Hate Speech Movement campaign was set up to mobilise young people in awareness-raising and acting on the issues related to hate speech and human rights online. From 2013 to 2015 member states set up National Campaigns and took part in the European campaign to gain a better understanding of the issues young people are concerned with and ways forward to counter this challenge to human rights and democracy.

In May 2015, in the framework of the Action Plan on the fight against violent extremism and radicalisation leading to terrorism, the Committee of Ministers decided to continue the No Hate Speech Movement campaign until 2017. This campaign remains driven by the need to counter online hate speech in all its forms, including those that most affect young people, such as cyberbullying and cyberhate, racism and other forms of discrimination. The campaign is based upon human rights education, youth participation and media literacy.

The thematic focus of the campaign in 2016-2017 will be Antisemitism, Sexist hate speech, Refugees, Root causes of violent extremism, Counter-narratives, Reporting, and Education.

We look forward to receiving your kind reply.