UN International Day of the Girl

In my own speech I explained that now UPF itself has female leadership through Mother Dr Hak Ja Han Moon. It is a more systematic style of leadership to that of Father Moon.

I explained that as a father of four daughters I can see their gifts and talents. Society is really going to miss out if those talents are not valued and utilised.

I referred to the McKinsey Global Institute report of September 2015, 'The Power of Global Gender Parity':

'We consider a “full-potential” scenario in which women participate in the economy identically to men, and find that it would add up to $28 trillion, or 26 percent, to annual global GDP in 2025 compared with a business-as-usual scenario. This impact is roughly equivalent to the size of the combined US and Chinese economies today. We also analyzed an alternative “best-in-region” scenario in which all countries match the rate of improvement of the best-performing country in their region. This would add as much as $12 trillion in annual 2025 GDP, equivalent in size to the current GDP of Japan, Germany, and the United Kingdom combined, or twice the likely growth in global GDP contributed by female workers between 2014 and 2025 in a business-as-usual scenario.' 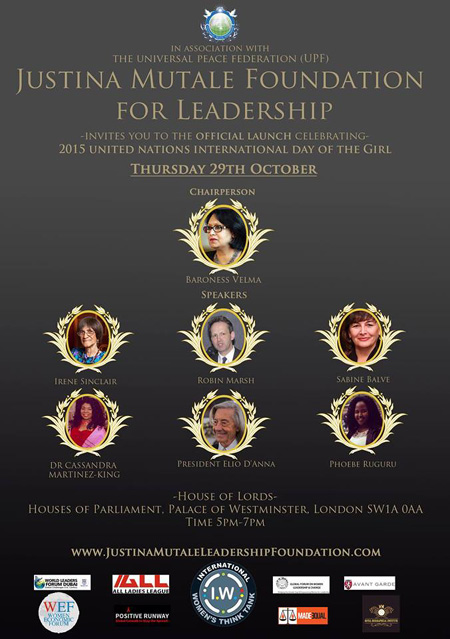 This is why the role of women is seen to be so significant in fulfilling the Sustainable Development Goals by 2030. The correct partnership of men and women is part of the solution to transform the global economy and raising the bottom billion out of poverty.

This report repeated the point that a good balance of men and women on decision making panels improved the quality of decisions made. It found that a critical mass of 30% women were necessary for significant results.

The House of Lords now has 29% women members. In the Commons 24% of MPs are women.

The Justina Mutale Foundation aims to empower and inspire women and girls to become future leaders in the workplace. (Other report http://ow.ly/U5UdS)

The Foundation was inaugurated in London during the programme by Justina Mutale to tackle gender inequality in the UK and around the world as part of her personal commitment to help achieve the Sustainable Development Goals (SDGs) on increasing women’s empowerment. Justina who was awarded the title African Woman of the Year in 2012 and is now a global ambassador for gender equality, said:

“As women of the 21st century it is important to empower ourselves so that women and girls can become effective and influential players in business, politics, society, and the environment, science, Technology and all other walks of life. To do this, women and girls need to be equipped with the necessary leadership skills that are required to dare the difference and to close the gender gap."

THE IMPORTANCE OF MENTORING GIRLS

It is important to give back to the community and is very important to mentor girls in our community.  At 107 I am still mentoring girls and giving time back to my community - a community of all nationalities and all ages. I take an active part in showing young and old that as long as the mind is willing, anything is achievable

INNER ECONOMY: VISIONARY LEADERSHIP IS THE ART OF DREAMING

Economy like politics is an inner matter. Any external revolution, be it social, political or economical, can only increase misery and suffering, and perpetuate without remedy, crisis, conflicts and violence.

Inner economy is the answer and the solution to all crisis.

To create a new future we must bet and invest on visionaries, on dreamers, on people who love their work.  Only those guided by their dream, led by their inner intuition will be able to project at will a world of abundance and fortunes.

We need to reinvent the economy, not merely restore it. The sustaining new economy is something coming from within, something governed by your inner being that will care for each man, for the natural world, and for the future.

If the world is really as you dream it - if the world is truly an extension of your inner being, as we believe it is, then you can be certain that there is an impeccable economy within man that, once revealed, will change and govern the world at will..... in harmony and prosperity.

"The slightest change in your being moves mountains in the world of events.”

UNLOCKING THE POWER OF THE GIRL AND INSPIRING THE NEXT GENERATION FOR LEADERSHIP:

and Director of the Future Leaders Programme at the Resource Alliance

WOMEN AS LEADERS – THE UNCONSCIOUS OBSTACLES THEY FACE

Gender bias is unconscious; you are not aware it’s impacting your judgement. Thanks to the pressures of natural selection, humans have some cognitive mechanisms built in that allow us to quickly adapt to change. One of them is the ability to learn quickly.

According to the law of association by contiguity — if you repeatedly pair two things together, these two things will subsequently become associated in the unconscious brain. So, since we were children, when we saw a leader on TV, in the newspaper, movies or history and fiction books we read, it was a man.

Whether we wanted to or not, we have learned, unconsciously, to pair the two. When we think leader, we think man. As a consequence, female professionals are evaluated by different standards than men. They have to work harder and better to be seen as capable”.

CORRECT PARTNERSHIP WITH MEN IS PART OF THE SOLUTION

International Day of the Girl is rooted in the Sustainable Development Goals. 2015 theme: The Power of the Adolescent Girl: Vision for 2030.

I have four daughters. Each of them has their own unique talents and are choosing different paths to follow. A society that does not allow them to fulfil their potential is really going to miss out on their gifts.

Meritocracy: ‘Judge a tree by its fruits’ Luke 6.44

Research demonstrates that including women in the decision making boards enables better decisions. Once there is at least a ‘critical mass’ of 30% of women on Boards, corporate performance was significantly higher.

McKinsey Global Institute (MGI) report, The power of parity: How advancing women’s equality can add $12 trillion to global growth (2007). This was their lower estimate and would represent an 11% annual growth of global GDP and a significant step to overcoming global poverty.

‘I AM A CEO: AND I AM A WOMAN!’ - BRIDGING THE GAP BETWEEN GIRLS EDUCATION, CAREER CHOICES AND BOYS CAREER TRAJECTORY AS A MEANS OF ADDRESSING GENDER INEQUALITY IN THE LONG TERM

One of the core goals of the Millennium Development Goals (MDGs) is rectifying the imbalance in girls education and boys education and ultimately career choices that leads to the continuous inequality in women’s socio-economic enfranchisement.

Since the setting up of the MDGs, gains have been made in the sphere of girl-child education across the world, and certainly in developing economies, but these gains are not far reaching enough for the efforts that has been put into the programs. Why?

From one’s own experience, I would assert that there needs to be a constitutional paradigm shift in policy and thinking on the whole issue of gender inequality that goes far further than currently seen in in-country practices.

There needs to be a concerted effort to deal with the subtle and insidious potrayal of women as non-visible in society’s positions of leadership and authority; non-visible as economic managers and architects of socio-economic development; as Presidents and C.E.O’s of core monetary systems; non-visible as scientists and scientific decoders of human physiology and medicines; and as technology scientists that young women can see, hear and aspire to be.

The Post 2015 Global Goals for sustainable Development (SDGs) would be met when young women (and their parental adults) across the world begins to say “If she can do it, and she’s a woman Astronaut or the President, or the Governor etc, so can I”!

Girls and young women are visibility encouraged to aspire to the top jobs because they had seen other women so positively potrayed in those positions of leadership and authority, as I was, by the media and in real life.

WHAT DOES IT MEAN TO BE A GIRL OR WOMAN IN LEADERSHIP?

My presentation will briefly highlight successful victories led by women, whilst drawing on different issues today to reflect the challenges which inhibit female leadership. In addition, I will challenge the definitions that are enveloped in what it means to be a “girl/woman” drawing on modern campaigns to challenge the use of gender specific language in narrating women’s stories and achievements. There will also be significant references to the role of mentors as templates for leadership. This will refer to the differences in how different institutions/subjects go about instilling ideas about leadership when discussing male leadership and female leadership. I will also touch on the challenges that arise with women leading in different fields and contexts; I will draw on ideas which are imposed on women, but ideas which women have also imposed on themselves, or rather failed to oppose. All in all, I look to emphasise the importance of the definitions, which we align with gender as well as recognising the effectiveness of narration as a means of expanding platforms for women’s empowerment.

MY HOPES FOR THE FUTURE