UPF Partners with Projects in Africa

WAIT - UK and The International Relief & Friendship Foundation UK programmes in Africa were highlighted at a joint meeting with the Universal Peace Federation. A number of other programmes were advertised including Against All Odds run by Fikelephi Jackson, working in Malawi.

The audience was treated to a performance by WAIT members and a talk from WAIT leader Carmela Mould. Marshall De Souza, the WAIT UK CEO also shared the inspiration he had received by taking WAIT members to Uganda, Kenya and Zambia to assist other WAIT teams to start and develop.

WAIT is a proactive and dynamic peer education project, aimed at preventing the spread of HIV through delaying sexual activity, and inspiring young people to live a healthy and ultimately satisfying lifestyle. 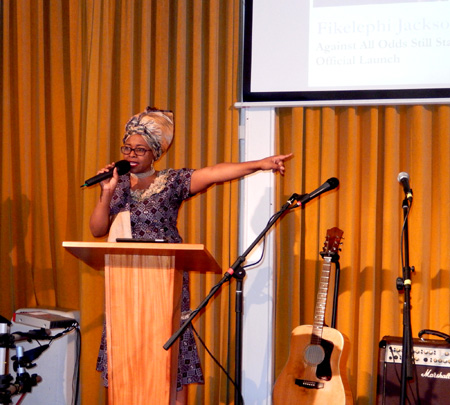 Marshall also shared about the projects of IRFF. He is a Field Director of IRFF - UK. He had been a member of a delegation that visited several countries including Uganda and Zambia where IRFF has ongoing projects over many years. He explained IRFF's Jigger's programme to remove insects that had burrowed into children's feet. This programme had been working in 21 rural areas of Uganda. (Link for more info:)

Fikelephi Jackson spoke about her work in Mallawi organised through her charity called Against All Odds. There is an upcoming fundraising concert by The Annointed on the 29th of August to support the work of Against All Odds. Please see link for more details. The Annointed sang two wonderful songs during the evening and got many of the audience to join in or dance. 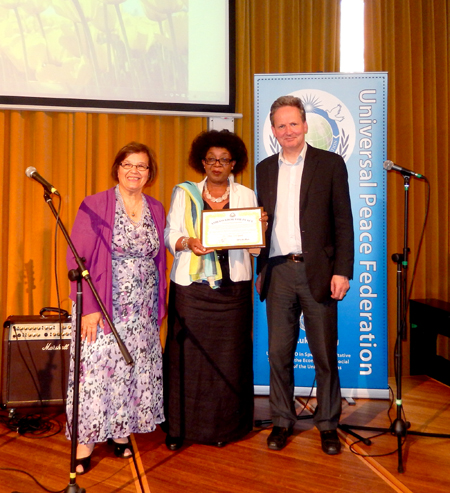 Dr Velma McClymont also received an Ambassador for Peace Award during the event. Dr McClymont is a

former lecturer in Caribbean history/literature. She is the founder/former Director of the Caribbean and African Learning and Heritage Centre (CALAH), which was founded to achieve “better outcomes for BME children and families”. Drawing on her past experience in local government, which gave her valuable insights into the lives of BME children and families caught up at the “hard end” of child protection, she provided safeguarding training for faith/community groups and raised awareness of cultural practices that may have a negative impact on children. These include FGM and abuse linked to spirit possession, as well as physical chastisement in Islamic schools, sexual abuse in places of worship, child trafficking, domestic violence and elder abuse.

author in schools and libraries across the UK and in Jamaica. Her first book, Hope Leaves Jamaica, was nominated for the Guardian Children’s Book Award and featured on Channel 4’s Junior Geography for Schools. The book has been widely read in schools and libraries as far afield as New Zealand and Canada (recommended on the Canadian multicultural reading list). Her third book, Birds in the Wilderness, was longlisted for the Federation of Great Britain Children’s Book Award and shortlisted for the Sheffield Children’s Book Award. Tricky-Tricky Twins, her fourth book (for younger children), was promoted by Nivea and sold 11,000 copies within three months of publication.

Prior to becoming a published writer and an academic, Velma worked at the Bank of England as a Senior

Bank Officer. Indeed, she has had a varied career in banking, lecturing, local government and publishing. She writes poetry and enjoys being a motivational speaker. In this capacity, she spends her limited free time encouraging women and young people from disadvantaged backgrounds to: aim high, build resilience to counter rejection; adopt a “can do” attitude and focus on self-reliance.

A wife and mother of two grown up children, Velma is currently writing her sixth book, which is a feminist, historical novel of roughly 900 pages. In Nov 2014, she represented Jamaica/the Caribbean at the Commonwealth Women Writers Festival in Glasgow. She is also a commentator for Radio ABCi Glasgow and was very active in the run-up to the General Election, speaking at the Scottish Parliament about the need for more black women in politics, analysing the various political parties' policies over the radio and encouraging listeners/the black community across the UK to vote.

When she is not writing or attending literary/cultural events, Velma gives back to her community by acting as a consultant (no charge), advising on setting up projects, sourcing funding, writing bids, delivering training and accompanying individuals to tribunals, hospitals and safeguarding meetings.