Hosted by the Rt. Hon. Baroness Verma: Parliamentary Under Secretary of State for the Department for International Development

We were very happy to see the new resolution on the UN General Assembly declaring June 19th the International Day for the Elimination of Sexual Violence in Conflict. Many of us attended the Global Summit to End Sexual Violence in Conflict in Excel highlighted by then Foreign Secretary William Hague, and the actress Angelina Jolie, last year. There are many difficulties to fulfil the goals of the conference. Islamic State has been accused of taking captured women into sexual slavery. In the lawless region of the eastern Democratic Republic of Congo, despite the presence of the UN MONUSCO troops, the prevention of sexual violence in the ongoing conflict seems very challenging. 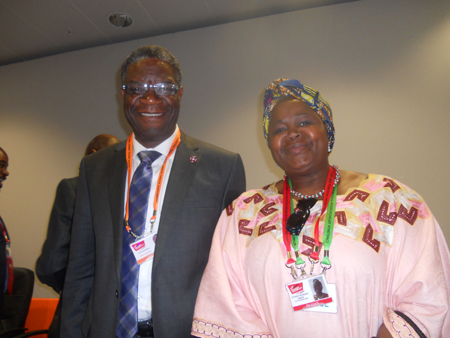 Excel focussed the attention of so many dignitaries and Governments on sexual violence in conflict. Please see the Foreign Office page for Prevention of Sexual Violence in Conflict for UK policies and developments. Photo of Dr Denis Mukwege, Founder and CEO of the Panzi Hospital in eastern Democratic Republic of Congo, with Charlotte Simon at the Global Summit to End Sexual Violence in Conflict. The Panzi Hospital speciailises in treating the victims of sexual violence.

There will be a number of short contributions from those from areas that have suffered from Sexual Violence in Conflict. Including: Tatiana Giraud: Founder of TG FoundationBiba Mundabi MadimbaHélène MapimaNicole KadibuChristelle K. Ngama

To attend please RSVP to This email address is being protected from spambots. You need JavaScript enabled to view it. or register on our Facebook page http://ow.ly/P4R3W