Islam, Peace and the Middle East 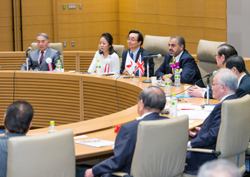 UPF-Japan conducted the fourth Japan-Europe Forum in February, inviting Lord Nazir Ahmed, one of the earliest Muslim members appointed to the Britain’s House of Lords, who has been involved in eliminating discrimination and discrepancies attributed to race, religion or gender.

Hundreds of citizens and experts in Kobe (14th), Fukuoka (15th) and Tokyo (16th) listened on the topic: Middle East peace and Japan's roles - A European perspective.

A special leadership forum was also convened on 16th February at the international conference hall affiliated to the Diet (Japan’s parliament). It was attended by some 80 individuals including a dozen Diet members, scholars, media personnel and religious figures. They heard Lord Ahmed's discourse on Islam, analysis on ISIL and the needs for the UN reform.

Emphasizing importance of the forum, President of the UPF-Japan, Dr. Eiji Tokuno, explained that peace and stability of the Middle East constitutes Japan's vital national interest, as nearly 90 per cents of the country's energy supplies come from that tension-filled region.

Appreciating decade-long support of Lord Ahmed for the UPF projects in Britain, Europe and the world including the Middle East Peace Initiative, Dr. Yong Cheon Song, Chairman of UPF's Japan Region, introduced Lord Ahmed as a Muslim with European perspectives.

Lord Ahmed explained that Islamic teaching forbids the killing of the innocent including children and women, even in a war situation. He said that Quran advises "Make peace among brothers!", indicating mediation between conflicting parties and peacemaking as essential duties of Islam. Quoting a Quranic verse "There should be no compulsion in religion!", he suggested not to argue on faith but respect others' belief.

Given these Islamic tenets, ISIL which threatens the world with its rampant atrocities has nothing to do with Islam, he declared. He even pointed out that ISIL abuses religious sentiments and dogma to justify their political objectives.

In analyzing the current civil strife and diplomatic tensions across the Middle East, Lord Ahmed referred to a proxy war between two regional powers with strong religious fundamentalism: Saudi Arabia representing Islam's Sunni sect and Iran representing its Shia sect. As a case in point, the genesis of ISIL had many things to do with Iraq's sectarian politics, eventually obliging its Sunni people to resort to violent means against both Syrian and Iraqi regimes.

With little hopes in economic well-being or political future, young people are susceptible to the radical groups who sell cheap justice backed by certain religious world views and visions. "These radical groups will not easily disappear from the world scene", he predicted. 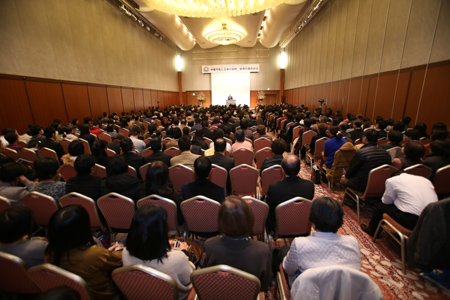 As for an international response, Lord Ahmed expressed hope for the United Nations as a viable mediator between various parties of conflict in the Middle East. However, the five, nuclear-powered permanent members of its Security Council abuse their veto powers, making this international body paralyzed.

"The UN has become so outdated that its reform is indispensable. If the UN advocates democracy to its member states, why doesn’t it apply democracy in its own system?”, he said.

"Post-war Japan has shown remarkable achievements in helping the developing countries around the world without its own geopolitical interests or military ambition. Japan is thus well qualified to apply its proactive peace-making capacity”, he encouraged the attending Ambassadors for Peace.

In every speech, Lord Ahmed expressed his appreciation to UPF's peace ideals advocated by its founders, Rev. and Mrs. Moon, in addition to its clear and firm orientation for strong family values. (end)