Eulogy by Amira El Houderi: The Three Leadership Lessons I Learned From #TawfikBensaud

Honourable members of the Parliament, Distinguished Guests, Ladies and Gentlemen, Today, I want to take this chance to remember a person who changed my perspective on leadership, in different ways. He was a very special person to many people who knew him. He was also able to inspire even those who never met him. I find it difficult to describe the essential truth about him as a person.

My first time meeting Tawfik was in London in 2012. He came with a group of young Libyans on a short study tour.  We met again in the same year during my short visit to Tripoli. He was only 16 years old at the time.

Despite his very young age, I saw a very charismatic young man, full of joy and good humour. He was very different to boys his age. He was very energetic. He showed strong interest in making positive change within his society in Libya.  He was an activist, a reporter, a blogger and a great debater. Tawfik was almost engaged in everything. He was a member of many Libyan NGOs. He was member of the Committee of Supporting Women in Decision Making, a member in Bokra youth organization, a member in Benghazi El kher (or Benghazi Good) project, he was a board member of Mercy Human Rights foundation, a member of the Libyan debates club and many more. I certainly saw a young man with a sharp vision equipped with leadership skills.

Three weeks ago, on 19th of September 2014, Tawfik and his friend Sami were both assassinated in Benghazi, a city in the East of Libya. Since the 2011 Uprising, Libya has been experiencing instability and continuous violence. Many activists, journalists and members of the legal community were threatened, abducted or assassinated.

Despite his short life, Tawfik had left remarkable achievements and positive lessons, in which we can all learn from, especially the concept which I mentioned at the start that is leadership.

Here are the 3 lessons I learned from Tawfik on what it take to become a true leader in my view:

Almost everything in current Libya is enforced by violence. Many political decisions and laws were enforced by violence. While violence seemed to be the only language spoken and practiced in Libya, Tawfik was a firm believer in the language of peace. This is illustrated in his written work published online. He enjoyed taking part in debates. People who know him well would tell you that Tawfik was an eloquent speaker who constructed his arguments coherently.

Even though the language of violence has partially dominated the Libyan society, Tawfik did not let this affect him and he stayed true to his peaceful leadership style.

Lesson2: Translate your beliefs into action.

What I think makes Tawfik different from people around him and influential for many, is that he continuously tried to translate his core values and beliefs into wonderful projects for everyone to see. This is an essential leadership characteristic. For example, he stood up to injustice much earlier than other people around him. He refused to stand watching injustice committed against a minority group of Libyan citizens from the city of Tawergha, who sadly became refugees in their own country. Tawfik’s endless voluntary work in IDP camps 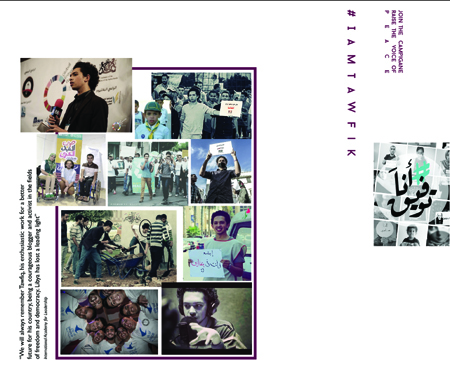 scattered around Libya showed his strong passion to the cause. He lived in Benghazi, but would never hesitate to come all the way to Tripoli - 1000km away from Benghazi, to support campaigns for Tawerghan Children.

Lesson 3: Embrace your fear as your best friend.

Despite the amount of threats he received to silence his voice, nothing stopped him. He led demonstrations in Benghazi against militias. He joined several important campaigns such as “no more weapons” and “I am Libyan I am against terrorism”…..  His father passed away only a month before his assassination. Even at such a difficult time for Tawfik, of what is going on in his personal life, he continued working and did not stop. ….He was meant to deliver training workshop on Active Citizenship for young people in Benghazi, just few days after his assassination.

Tawfik knew he was targeted, but he never shown a sign of fear. A true leader should not let fear suppress him or her; fear must be used to bring the best out us, which is what Tawfik did.

Finally, Tawfik resembles the real change that can be made even when you are so young. He showed us the power of youth. He showed us that leadership is not confined by age. He taught me that a true leader must persuade with no power, to translate core values into action and to use fear as a tool to create positive change within our societies. Tawfik has shaped the Libyan civil movement, and will continue to do so. He will always remain the face and voice of the Libyan civil society.

What a magnificent soul he was.  We will miss him deeply.   Amira El-Houderi