MUSIC FOR PEACE IN THE MIDDLE EAST

With Some of the Middle East’s Most Renowned Musicians 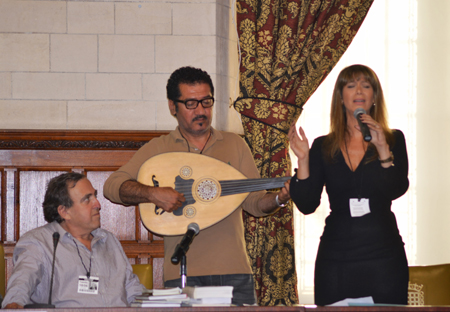 Israeli singer songwriter Tally Koren heads a cast of Israeli and Palestinian musicians in a recital, ‘An Evening of Music for Peace in the Middle East’ taking place on the International Day of Peace, Saturday, September 21 at St. Peters Church on Kensington Park Road W11. The event organized by the Universal Peace Federation UK is a fundraising occasion for the Parents Circle Families Forum, which helps bereaved Palestinians and Israelis to reconcile their differences as an alternative to conflict.

Tickets £13.00 via  http://musicforpeaceinthemiddleeast.eventbrite.co.uk or £15.00 on the door.

Tally Koren, is a BBC Radio 2 playlist artist and the Fringe Award Winner For Best Singer-Songwriter. Her music was played by Chris Evans, Graham Norton, Janice Long and Steve Wright ,the Aled Jones’ Good Morning Sunday Show and was featured on the Virgin Media TV playlist and 100 other UK radio stations.  She is passionate about this concert saying,  “ I believe strongly that through culture we can bridge the gap for a better future “

Nizar Al-Issa is a singer with extraordinary range and control as well as a virtuoso on the oud (a cousin of the lute). He draws on traditional middle eastern music but is not afraid to upset the purists by mixing things up a little - a habit he puts down to his refugee background. Nizar explained, “ I am part of this concert for peace and humanity”  His roots are in Ramallah but in his influences and attitudes he crosses borders.  “Iraqis ask me if I’m from Iraq, while the Egyptians are convinced I am from Cairo, and in Spain they’re sure that I’ve spent time learning gypsy Flamenco… but the heart and soul of my music is the knowledge that we all share far more in common as human beings than we acknowledge, wherever we come from.”

Office Tel: 02072620985
This email address is being protected from spambots. You need JavaScript enabled to view it.
www.uk.upf.org