A Fundraising Event for Iraqi Refugees Within Iraq 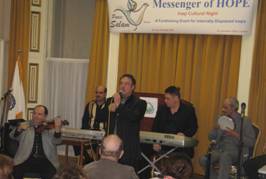 'You don't have to be hundreds of miles from your home to be a refugee'
William Morris, the Secretary General of the Next Century Foundation, commented on the plight of millions of Iraqis during a fund-raising event called 'Iraq Night: A Fund-raising Event for Internally Displaced Iraqi Refugees' last Sunday.

The event was inspired by Aziz Al-Naib, an Iraqi artist and a leading Ambassador for Peace, who founded ''Messengers of HOPE'' to provide humanitarian support and raise awareness of the suffering of his fellow Iraqis. It was hosted and sponsored by the Universal Peace Federation in the UK. It was supported by Religions Working Together, Student Peace Building and Faith Link, an Interfaith Connection for Youth.

While there was a great deal of emotion and passion in some of the speeches during the afternoon session on the current situation in Iraq, there was also much to learn from those who have recent personal experience. William Morris posed the question, 'Will Iraq survive us when we leave?' Concluding, with qualified optimism, that in the long term, despite all the dangers now, the community tensions that remains to be resolved and the flaws up to this point, Iraq can be a great nation when the Iraqis feel safe to return especially since young Iraqis have had a taste of democracy.

Aziz Al-Naib, spoke of his personal experience and those he knows becoming refugees that motivated him to begin 'Messengers of HOPE'. Despite being thousands of miles away, his mind is with his friends and relatives in Iraq. Haif'a Al –Tai, who is a Director of 'Messengers of HOPE', also commented on the horror in Iraq that led many of her friends to leave and they are still not able to return. Tracey Coleman, the Secretary of Messengers of HOPE, spoke of Religions Working Together's desire to support Aziz in this project.

Mr. Noaman Muna, a Trustee of the Iraqi Association UK and Iraqi Al Amal Association, that has been working for 10 years to relieve humanitarian suffering in Iraq, addressed the group after driving a long distance to make the meeting and support Aziz in his efforts. Dr Suha Rassam spoke of the situation of Christians within Iraq. Dr Laila Al-Roomi emphasized that in the past within Iraq there was no distance between people of different faiths or ethnicity. Mehyar Kathum, an Iraqi who as part of an NGO called 'Culture For All', established training and cultural centres with the support of the local communities in Iraq. He described his experience establishing a computer centre, without any security, in Baghdad to help young Iraqis receive computer skills training. 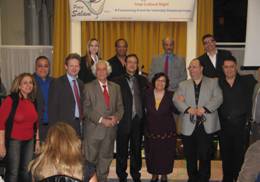 This was followed by performances by Jamal Baghdadi, an excellent Iraqi singer, who captured the mood and emotion of the largely Iraqi audience. He was supported by several drummers and keyboard players, Jama Al Amir, who is Iraqi, and Al Jamel, Ibrahim Menyaei and Farouq, who are all Egyptians. Wa'el Abu Baker, a remarkable violinist from Egypt, enraptured everyone in his music. The ability of all these performers to harmonize together without rehearsal was amazing. Other performers included Sarah Hanna, Betty Molloney, Mike Ricketts, and Sayuri, a classical singer from Japan. Together this was a cultural feast for all who attended.

Much help was given behind the scenes by people who sold raffle tickets, prepared sandwiches and delicious Iraqi delicacies. Ambassadors for Peace like, Cllr. Janet Baddeley from Watford who, as a true public servant, rolled up her sleeves to serve the teas and coffees. Thank you, also, to the musicians, who gave their time and heart for the displaced children of Iraq, without charge.

'Messengers of HOPE': Currently 2.3 million Iraqis are living as refugees within their own country. 65% of these are children. ''Messengers of HOPE'' seeks to both provide humanitarian relief and promote awareness of their plight. See photos of the event.