Universal Peace Federation (UPF) - UK Secretary General, Robin Marsh, was invited to address the UK launch of the World Minorities Alliance. It is a laudable initiative of  Mr Julius Salik in Pakistan and supported by UPF Pakistan branch. The initiative shares much in common with UPF's vison of humankind being 'one family under God' in which all people have equal value irrespective of where they are born. Marsh emphasised the founding purpose of UPF to create an Inter-religious Council in the United Nations that would enhance inter-religious and inter-cultural understanding and peaceful relations. He also congratulated Pakistan for its wisdom in co-sponsoring the UN Resolution with the Philippines to establish a unit within the UN Secretariat to promote Interfaith Dialogue. Pakistan Times' UK Bureau article of event  link here. 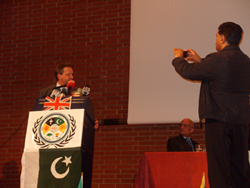 Outgoing British MP Muhammad Sarwar in his farewell speech as a member of now dissolved House of Commons recounted the contributions of  Asian communities in the UK and said they were contributing 10 per cent of the GDP to the British economy despite being only one per cent of the population.

He noted that minorites all over the world face challenges and the Asian community in the UK was no different. “ However, just by sheer hard work, the community has been able to achieve notable goals and the history is repleted with their success stories.”

Sarwar said minorities both in Pakistan and India have faced problems but the respective governments have been cognisants of their issues and endeavouring to resolve them. He appreciated the Pakistan government for declaring August 11 as the national minority day and raising their job quotas in the Government departments. He said although minorities have faced persecution elsewhere in the world but in the UK they enjoy an equal status which has resulted in their positive contributions to the British society in all fields.

Citing his personal example, Sarwar said he came to the UK in 1976 from Toba Tek Singh. He worked hard to attain success in business and politics and succeeded in becoming the first Muslim MP in 1997.  Sarwar is now standing down from May 6 general elections and has put his son Anas Sarwar as a candidate from Glasgow Central seat. He urged both the Asian and Muslim communities to make judicious use of their votes in the next month’s general elections to make their presence felt.

British Transport Minister Sadiq Khan, the first Muslim minister in the Cabinet meetings, spoke of the rights enjoyed by the minorities in the UK. He also pointed out at the generous assistance provided by the UK government to Asian and African countries, which is helping minorities in these countries prosper and flourish.

He felicitated human rights campaigner and former Federal Minister Julius Salik for launching WMA. He lauded his role in upholding the rights of minorities in Pakistan and working vigorously  for their cause. Khan said the minorities in the UK have prospered because of British belief in shared values and working together for a common cause.

Rami Ranger, President, Pakistan-India Friendship Forum, praising the formation of WMA said no country could prosper without supporting the cause of minorities. He said human rights abuse have taken place all over the world and the respective governments have a challenge to ensure people of all faiths are treated equally and properly.

Robin Marsh of Universal Peace Federation termed the launching of WMA as a ‘commendable initiative’ and hoped that the newly established alliance will work for the cause and upliftment of minorities around the globe.

Salik explained the objectives of WMA and said the body has been launched in the UK which is the mother of democracy and everyone irrespective of caste, colour or creed is treated equally and provided with even opporunities to flourish.

Councillor Mushtaq Lasharies conducted the event held at the town hall of Royal Borough of Chelsea and Kensington. On this occasion, MP Sarwar was presented with a gold crown in recognition of his services as member of the House of Commons.