New Vision Amid the Economic Crisis 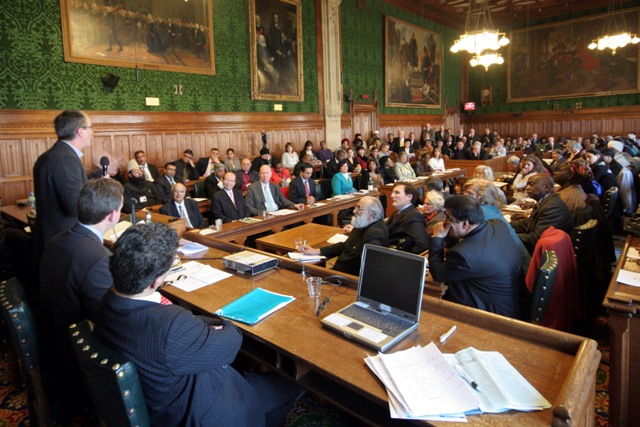 While the G20 Summit was meeting in the Excel Centre and violent demonstrations were disturbing the City of London’s banking sector, the Universal Peace Federation (UPF) was holding a conference with civil society and faith-based groups in the House of Parliament’s largest committee room, entitled, ‘New Vision Amid the Economic Crisis’. This contrasted the moral vision promoted by civil society and faith based groups with the pragmatic approach of the G20 Nations’ Summit. Many in the session echoed the ‘Put People First’ demonstration theme that this was a time for a new perspective and not just a return to ‘business as usual’. In the lead up to the G20 UPF had issued a Statement emphasising the need for ethical change:

‘If there is to be lasting change, the G-20 must acknowledge that the current financial crisis did not happen by accident, and it was by no means inevitable. The root cause of the problem has as much to do with moral, indeed spiritual failure, as governmental or financial mismanagement. For this reason, improved fiscal, economic and trade policies alone are not enough. The attitudes and behaviour of people, institutions and even entire nations must change.’

Lord King, a Patron of the Universal Peace Federation (UPF) - UK, warmly welcomed a conference to the Houses of Parliament that contained two sections, the perception of faith groups and the analysis of the economic crisis by activist organisations:

‘If there is to be lasting change, the G-20 must acknowledge that the current financial crisis did not happen by accident, and it was by no means inevitable. The root cause of the problem has as much to do with moral, indeed spiritual failure, as governmental or financial mismanagement. For this reason, improved fiscal, economic and trade policies alone are not enough. The attitudes and behaviour of people, institutions and even entire nations must change.’

Richard Dowden, (photo above) the Director of the Royal African Society, said that Africa is a rich continent full of poor people because of bad governance.  The West has been complicit in this, although the prime responsibility lies in Africa.
‘A lot of corruption money from Africa goes into British tax havens and then into the city of London.  The city is committed to eradicating drug money, terror money and corruption money.  A nation’s health budget stolen as corruption money kills more than drug money and terror money put together, but the city has failed to address corruption money.’

International Secretary General of UPF, Dr Thomas Walsh, presented an overview of UPF’s activities. He emphasised the role of character education rooted in the experience of a loving family to build a stable economy within one family of humankind under God.

Rev. Dr. Chung Hwan Kwak, the International Co-Chairman of the Universal Peace Federation, reading from a prepared text, emphasised that there are many policies we need to follow to stabilise our economy or care for our environment but these will be best built upon the bedrock of loving families. He called for a Global Service Corps of youth that could heal divisions while working to fulfil the Millennium Development Goals.

Imam Umer Ahmed Ilyasi, the Secretary General for the All India Imams and Mosques organisation, who represents 500,000 Imams in India, spoke on the failures of the G 20 agreements. Speaking as a representative of the largest democracy in the world, I do not see economic growth reaching to the grassroots level. Imam Ilyasi said he will launch ‘Faith in the 21st Century’ for interfaith action to solve common problems, later this year.

Frank Kantor, the Secretary for Church and Society for the United Reform Church and also one of the Joint Issues Team for the Baptist, Methodist and the United Reform Churches in the UK, had invested much effort in a statement in coordination with the Churches Together in Britain and Ireland. He saw three significant roles for faith communities during this crisis: Firstly, a Prophetic role to present God’s view as we understand it to the world; Secondly, a Pastoral role to care for those who are suffering due to lack of money and jobs; and thirdly, to form partnerships with civil society.

Anil Bhanot, the General Secretary of the Hindu Council – UK, stated that there is nothing wrong with money itself but with business ethics.  We need a 3-tier regulation system to prevent abuses.

Civil society groups, such as Nick Dearden, the President of Jubilee Debt Campaign, saw this crisis as an opportunity to rethink our economic system rather than going back to business as usual after the crisis is over. There is a $3 trillion debt owed by the poorest parts of the world to the richest parts of the world. For every £1 we give in aid, poor nations pay £5 in debt payments.

Ruth Tanner, the Campaign and Policy Officer for War on Want, saw the crisis as a result of the failure an economic system that has left 2.2 billion people live in poverty including 1.4 billion who live in extreme poverty. She added, ‘What inspires me is how people on the ground are standing up to the system and the local partners of War on Want are setting up unions for the workers to campaign for a living wage.’

Moeen Yaseen, the founding member of Global Vision 2000, said the he root of the problem is not money, but it is truth vs falsehood.  We’re living in an age of global deceit.  There needs to be a moral and cultural revolution. He saw the world economy ‘as a global casino economy where the house always wins’. He added ‘We need to clean out this city as Jesus cleaned out the Temple.’

Jonathan Fryer, the Chair of the Liberal International Group, who is currently standing for election as an MEP said that he wanted to see a ‘genuine new world order rather than a reshuffling of a pack of cards sharing wealth and decisions.  Developing the G7 to G8 and G20 is a good thing in itself, but if we are just reshuffling the pack, 172 nations are still left on the sidelines.  We need to work together with common moral principles and goals. Don’t just lobby your MP but blog, tweet and make sure your voices are heard.’

Inspired by our faith, armed with the experience of so many civil society groups and an unparalleled network of Ambassadors for Peace and Partner organisations the consensus seemed to be that this is an achievable campaign and one crucial step towards one family of humanity under God.