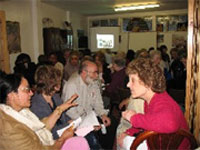 The first steps towards the formation of a Birmingham Peace Council were taken this evening. Adopting a theme of ‘Religions Working Together’, some sixty people and Ambassadors for Peace gathered at Dr David and Patricia Earle’s Birmingham home for a presentation about some of the activities of the International and Inter-Religious Federation for World Peace and the International Peace Federation including examples from the United Nations.

One of the Ambassadors for Peace, Dr Jagjit Taunque, stressed the need for such councils to be established at all levels and Patricia Earle then gave an outline of the Women’s Peace Meetings that have taken place in Birmingham and some of the factors that had enabled them to continue for almost 13 years.

During the next part of the evening those present were asked to complete a short questionnaire and to detail any areas of specific interest in which they felt that joint projects could be considered. The forms were then collected in and several people spoke of their hopes as to what working together could achieve. The formal part of the evening concluded with representative prayers from the Hindu, Christian and Muslim traditions.

Over refreshments that followed, many of the guests continued the discussion about the potential benefits of a Peace Council.