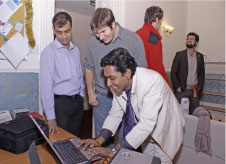 The Student Peace-Building Corps is an international movement of student leaders working in cooperation to build peace at all levels.

Its members, known as Collegiate Ambassadors for Peace, represent the religious, racial and ethnic diversity of the human family that stand on the common ground of shared principles and are committed to the path of promoting reconciliation, overcoming barriers, and building peace.


They are appointed by the joint approval of the World Collegiate Association for Research of the Principle (W-CARP) and the Universal Peace Federation (UPF) and are recognised as part of a movement of students engaged in peace-building efforts.

The British branch of the Student Peace-Building Corps was launched in London on Friday 14th December 2007 Matthew Huish, director of W-CARP in the United Kingdom UK, gave a brief presentation sharing its vision and explaining the globally coordinated efforts to pioneer this initiative. 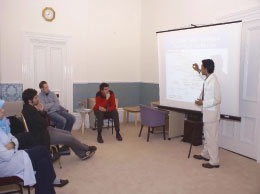 The prime focus of the event was the recent humanitarian crisis in Bangladesh following a destructive cyclone.  Students were invited to bring donations of warm clothes to be collected and taken to Bangladesh by Ahsanul Kishore, a Bangladeshi student studying at the University of Glasgow.  He spoke about his community work in Glasgow and outlined his post-graduate research into carbon management.  Those present donated money to support Ahsanul, who a few days later went out to Bangladesh to provide medical aid to thousands of the affected families.

A representative of Islamic Relief, Nabeel Sarwar, informed the student audience about the general activities of his group and how it was helping the situation in Bangladesh.  He provided some fundraising tins, which were used a few days later when some members went out carol singing, raising just under £100 for Islamic Relief. 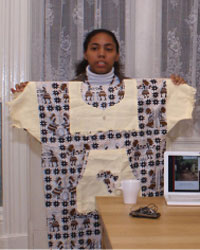 In the developed world, there is an occasional tendency for Africa to be perceived as a continent that is riddled with problems of corruption, poverty, starvation, war and refugees everywhere – However, this event aimed to dispel any myths and set the record straight.

Christa Yeun Kamga, who is half Cameroonian and half German, gave a cultural presentation about Cameroon.  She had previously given a similar talk on behalf of UNESCO in Korea, where she would visit schools and educate children about the reality of life in Cameroon.  It was quite entertaining, as well as informative, painting a picture of a nation rich in resources and culture but sceptical of foreign interest.

Christopher Maloney then gave a brief introduction to a project called ‘Tanzania Eco-Volunteerism’ and a plan to send around 60 volunteers to Tanzania for a programme that will involve education opportunities, developing humanitarian projects, cultural experiences (including a safari!) and most importantly an opportunity to share ideas and develop lasting partnerships.

The project will take place from 23rd June to 6th July.
The participation fee will be $550 and flights to Dar es Salaam are in the range of £500.  Further details can be obtained by contacting W-CARP. (This email address is being protected from spambots. You need JavaScript enabled to view it.).

The Next Step – Afghanistan

The Student Peace-Building Corps in the United Kingdom will be hosting its next event in March. The theme will be Afghanistan and investigate the fulfilment of the UN Millennium Development Goals in this recovering nation.

The Principles of the UPF
We are one human family created by God, the ultimate reality.
The highest qualities of the human being are spiritual and moral in nature.
The family is the "school of love and peace."
Living for the sake of others is the way to reconcile the divided human family.
Peace comes through cooperation beyond the boundaries of ethnicity,  religion and nationality.

The initiatives of W-CARP:
Peace and security in Northeast Asia, including North-South Korea unification
Interfaith reconciliation, harmony and cooperation for peace
Contributing to fulfilment of the UN’s Millennium Development Goals