A view from the Palestinian area of East Jerusalem 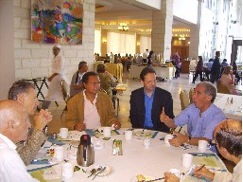 Daniel Seidemann is a Jewish lawyer and respected authority on the city of Jerusalem who works mainly in the Palestinian area of East Jerusalem. He has been invited to the British Foreign Office and the House of Commons on a number of occasions to brief those concerned with issues about Jerusalem. During the course of the current Middle East Peace Initiative event being held in Jerusalem, he took time out to speak to its European participants.

He set the scene by explaining that within a small triangle of about 100 metres around his home, office and his children?s school, there had been ten suicide bombings within the last five years. However, whilst supporting the need for protection he pointed out that on the other hand Jerusalem is being walled in for the first time since 1535 and he believed that the presence of The Wall would not work.

He stressed the need for a negotiated peace and pointed out that The Wall was fast becoming a de facto border. Walls might be able to come down but settlements were now being built up behind them. He explained that Palestinians in East Jerusalem lived economically with Israelis but politically and socially were oriented to Ramallah and Bethlehem. It was illegal for Israelis to go to Ramallah yet now even East Jerusalem Palestinians were being similarly being cut off from Ramallah and Bethlehem. Given such restrictions, if East Jerusalem Palestinians were even threatened by being asked, 'Are you with us or against us?' terror could build up internally which was a frightening prospect.
He saw a need to boost services in East Jerusalem to prevent such anger. However, with regards to educational needs there were an estimated thirteen hundred classrooms missing in East Jerusalem which meant that tens of thousands of children were being left uneducated. There were also extreme Jewish Messianic groups who had been given responsibility for the antiquities in Israel and the occupied territories who received half of their budget from settlers. There was digging under the Temple Mount and yet it was obvious to him that any destruction of the third most holy place in Islam would almost certainly lead to war. International forces were already involved in discussions with authorities in Jerusalem that were similar to the disarmament process that took place in Northern Ireland. He took the view that Palestinian authorities needed an international Arab sovereignty for East Jerusalem.