A visit to the Dehaeshi refugee camp

Participants attending a Middle East Peace Initiative fact-finding tour this afternoon met with the Fatah Palestinian Legislative Council member for Bethlehem, Dr. Emil Jarjoui, and travelled with him to the West Bank under the escort of a Palestinian police car. They visited the partially constructed Al-Feneiq recreation centre which, with UN support and volunteers from Europe, is being built alongside the Dehaeshi refugee camp just outside Bethlehem.

Some twelve thousand people live in the refugee camp many of whom have been there since the 1950s. Its inhabitants also include those who lost land or houses in the Arab-Israeli wars or since the 1967 occupation. The camp’s houses were originally built as a temporary measure but have remained there ever since.

One man who has lived there all his life guided the delegation around the camp and told them that most Palestinians had an experience of Israeli jails often as teenagers and mainly for throwing stones. A Member of Parliament from the UK, Richard Younger-Ross, who was present, asked him if it would ever be possible to make peace with Israelis to which the man bluntly replied that he thought it impossible. He added that people all over the world were fighting occupations of one sort or another and suggested that only if United Nations resolutions fulfilled peace and justice could peace ever become a possibility.

On walking through the squalid housing of the refugee camp, the guide pointed to a house where the middle of the wall had been re-concreted and explained that during an incursion, the Israeli Defence Force had decided to go from house to house through their walls rather than via their doors. He also showed the group a number of houses that had been destroyed and said that they were not allowed to rebuild them. 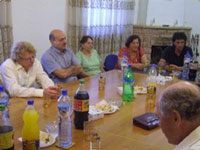 Together with Dr Jarjoui the group then went to Bethlehem Town Hall and met with the Deputy Mayor, George Sa'adeh, who gave his account of the current state of affairs. He said that there had been hope for a workable solution after 1994 but that by 2000 there was a great decline and much suffering. Invasions and curfews had made their situation very severe and pilgrims no longer visited Bethlehem even though it was the Christian capital of the world. He described it as like living in a prison although they had a legitimate right to live with order, peace and justice. Dr. Jarjoui added that he had welcomed the Pope to Bethlehem in 2000. The Oslo Agreement had stipulated that that there should be free access from Jerusalem to Bethlehem but that have not been implemented and there were people in Bethlehem who have not been to Jerusalem for six years. Richard Younger-Ross MP said that he had supported the Open Bethlehem campaign in Parliament and would continue to do what he could to help.

Also present was the Mayor of Beit Sahour, Mr. Hani Al-Hayek, who explained the financial difficulties he was under in needing to pay $75,000 each month in salaries and expenses, but with employees having received nothing for five months. It was the last month that they could manage.

He added that many Palestinians were emigrating to the United States or Canada and said that if things carried on at their present rate there would soon be no more Christians left in Bethlehem.