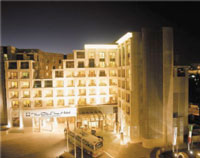 Jerusalem - 25 May, 2006 - Sponsored by the Universal Peace Federation, a further ‘Middle East Peace Initiative’ fact-finding tour this week visited Israel, Jordan and Palestine. Such trips which have been organised over the past four years in support of efforts for peace in the region, have won the support of many prominent local leaders.

With Jerusalem’s Olive Tree Hotel acting as the central meeting point, the well-attended international gathering of some three hundred participants from professional fields such as politics, academia, business, civil society and the media as well as representatives from a variety of different faith groups, came from every corner of the world to look at ways in which barriers and divisions could be overcome through developing better understanding and mutual respect.

Throughout the week they met with Israeli, Palestinian and Jordanian leaders and were briefed by government, media and independent experts. They also conversed with religious leaders and visited historical sites in Israel, the West Bank and Jordan. The event also provided participants with an opportunity to gauge the opinion of ordinary people on both sides of the conflict.

At one of its daily conference sessions, Janet Aviad, the president of Peace Now, the largest extra-parliamentary movement in Israel, spoke of rapid and deep change in Israeli public opinion in the past five years in which most Israelis now believe that the only solution is two states. For twenty-five years her group had opposed new Jewish settlements in the occupied territories and wanted to return to the 1967 borders but were forever being branded as “people who like the Palestinians”. However, she believed the idea of a single state solution to be a non-starter because by simple demographics that would soon mean an Arab majority and Israel would no longer be the Jewish state it was set up to be. On addressing the situation as it stands today, she said, “Both sides feel the same now. Enough violence, let’s make a deal. We’re all caught up in a bad enterprise. Get us out! God is great! We’ll see you later!”  She went on to say that although it was ridiculous to think that the Israeli could build a wall and that then there would be peace, it might well have been a necessary first step.

Professor Jonathan Rynhold of the Department of Political Studies at Bar Ilan University provided an insight into present Israeli thinking about the situation. He agreed that public opinion has shifted considerably in recent months and that ideas that were once considered left-wing have been adopted by the centre and now by the right, and had given rise to the new political party of Kodima (The Forward Party). He said that most Israelis now favour withdrawal from both the West Bank and Gaza, which in any case was geographically isolated and costly to maintain. People now generally accepted the idea of two nation states. The problem is that they don’t know how to arrive at that situation because they consider the Palestinian moderates are not yet strong enough to deliver. “That means that, for now, we can’t do conflict resolution but only conflict management,” he said.   The Hon. Nadia Hilou, the first Arab Israeli woman Member of the Knesset, praised the efforts of groups such as the Middle East Peace Initiative that advanced coexistence projects between Jews and Arabs. She had spent her entire life in her birthplace of Jaffa where there was a natural coexistence in which she and her four daughters and her parents had all attended the same mixed-race elementary school.   Several of the speakers put considerable emphasis on the belief that the problem will more likely be resolved by the people themselves rather that by their political masters or, for that matter, by a third party. They said people require dialogue rather than road maps.   Dr Concha Pinos Lopez, of Barcelona University, who had participated in the Madrid talks that were precursors to the Oslo agreement of 1993 which ended the first intifada, said she felt Europe had a great responsibility for the current violence in the Middle East, especially following the Holocaust and the subsequent relocation of the Jews to what was then Palestine. She said that she was a believer in Gandhi’s dialogue techniques to resolve conflict.   But perhaps the most heart-wrenching account was a double-presentation by two young men, one an Israeli, Rami Elhanen, and the other a Palestinian, Amien Khalil. Both had lost a child as victims of a suicide bomb and of a shooting. They have since become the very closest of friends and publicly embrace each other as brothers - each knowing the pain felt by the other. 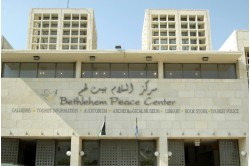 During the course of a visit to Bethlehem the group was able to hear views of representatives from the Palestinian Legislative Council, the Conflict Resolution Centre and the Bethlehem Peace Centre and a briefing at the Israeli parliament, the Knesset, provided the Israeli political viewpoint. There was also visit to the Holocaust museum and attended a ceremony of reconciliation. On the Saturday that followed participants were given an explanation of the opening of the Sabbath ceremony by local Rabbi Ringler. 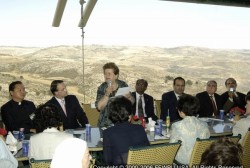 Travelling into neighbouring Jordan, a conference session held in Amman included speakers from Jordanian political, religious and academic life. The group then visited to the Jordanian Al-Safsaf Rehabilitation Society for a charitable fundraising lunch and were addressed by its Executive Director, Mrs Haifa Al-Bashir who told the delegates that it was ironic that a region that has sent its messages of love and peace throughout the earth to the followers of three world religions is now very much in need of the same. His Excellency Sabri Rbeahat, Minister for Political Development, said that when Jordan was founded ninety years ago it determined to build a reputation for peace. “In every conflict or disaster in the world, you will find Jordanian peacekeepers,” he said.

On returning to Jerusalem, a final evening of poetry and music included a performance by Yair Dalal, a famous Israeli singer who had toured the world campaigning for peace.