A Jewish-Christian Dialogue in Jerusalem

With both Christian and Jewish biblical scholars attending the current Middle East Peace Initiative in Jerusalem, it was perhaps inevitable that some of their time would be devoted to a Jewish Christian dialogue on theological issues. It was also a logical follow-on from the conclusion of the first Middle East Peace Initiative pilgrimage back in 2003 in which Christians and Jews participating had repented together for sins and offenses committed over a long and sometimes shameful history. At the time the groups had presented themselves not with demands to seek fault in each other but rather standing together in a shared space of repentance in which all each in their own way sought forgiveness, both from on high and from one another. Participants included Rev. Dr Marcus Braybrooke, Dr Bertil Persson, Dr Frank Kaufmann and Rev Dr Michael Jenkins. 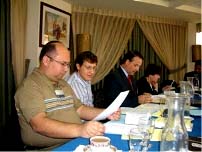 Today’s dialogue was headed by Professor Joshua Ben Ami and the first session was on prayer in the two traditions. The second took up the stories of Jacob and of Joseph whilst the next was on the role of women in the two religions and the concluding session was on the Messiah in Christianity and in Judaism.  An orthodox wife of an Israeli, Chief Rabbi confided that in many circles it was absolutely

forbidden even to utter the name “Jesus,” and yet there they all were, discussing the thorniest and most unmentionable parts of their shared history.

Each session proved to be rich in its own right as everyone moved from respectful conversation, dialogue, and presentations of views and positions to a shattering of the mundane and a yielding  of the intellect to the in-breaking of the world of the heart. Reconciliation and harmony sprouted in and around those taking part which radiated out and tended to envelope the partners in ineffable spaces of oneness.