Participants in a ‘Middle East Peace Initiative’ event currently being held in Jerusalem took time out today to visit Bethlehem, the birthplace of Jesus.
Although an obvious tourist attraction for any visitor to the Holy Land, the first impression was or a rather run-down township daubed with a fair share of graffiti written in Arabic but with no sub-titles.

The presence of a recently constructed high concrete wall which effectively splits the community and divides people from their former neighbours has had a detrimental effect on the inhabitants to such an extent that a local campaign known as ‘Open Bethlehem’ issues special Bethlehem passports to those who support the cause of Bethlehem’s search for its rights.
A Bethlehem Peace Centre lies in Manger Square between the Holy Church of Nativity and the Mosque of Omar. It’s a cultural community centre where great efforts are made to maintain harmony between the town’s seventy per cent Muslim population and thirty per cent Christian population.

The Caritas Baby Hospital serves the Bethlehem area in paediatric care and its Public Affairs officer, Erwin Schlacher, explained how the hospital had tended to a total number of 34,000 babies last year alone. It is widely known to be place where medical care is based on needs rather than an ability to pay. But he explained that because of the lack of paediatric surgical facilities in Bethlehem some 60 – 100 operations were undertaken in Israeli hospitals for Palestinian babies and that there had been extensive cooperation in such arrangements despite the complications involved by security concerns. The Peres Centre has paid many of the costs for the operations. 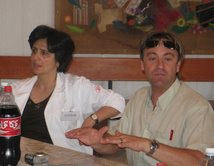 One of the doctors, Hiyam Marzouqa, gave an insight into some of the consequences of the current political situation on families and babies in the West Bank. She spoke of malnutrition among the poor that prevented mothers from breast feeding their babies and referred to her experience of the resultant stress and psychosomatic illnesses affecting babies. She also said how much the hospital appreciated such visits from overseas visitors because as Palestinians they felt somewhat isolated but that such visits helped them feel that they were not forgotten.
The group then visited the Mayor of Bethlehem, Victor Batarset, the Mayor of Beit Sahour, Hani Al-Hayek, and Doctor Emil Jarjouie, the Palestinian Legislative Council member for Jerusalem.

Dr Jarjouie explained something of the political difficulties being experienced and said that the Palestinian Central Council had authority to lead the Government under an Emergency Decree for 30 days and that with the Parliament's support that could be renewed. However, the Parliament was unable to function at present because most of the Hamas members in the West Bank were in jail and a military takeover of power in Gaza by Hamas had destroyed cooperation within the Unity Government.
He spoke of Palestinian Authority customs money to the tune of $1.2 billion that had been held by Israel ever since the election of Hamas and said that such money could have solved their financial crisis. He added that the Israel Foreign Minister had recently offered to give $0.6 billion to the Palestinian Authority but pointed out, “This is our money that they are deciding to give us!”

On the coach journey back into Jerusalem the Palestinian tour guide said, “When I hear these senior leaders speak to you I think they can relieve their hearts. They are able to express their feelings in a way that they cannot at any other time.”