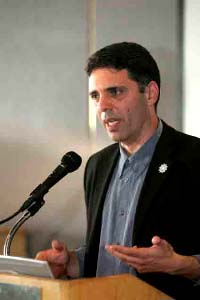 A group of 34 religious leaders, professors, parliamentarians, NGO leaders, human rights activists and journalists visited Israel-Palestine for February’s Middle East Peace Initiative (MEPI). Representing 12 nations in Europe, the group started the tour, aimed at fostering a better understanding the Israeli-Palestinian conflict, with a series of meetings, briefings and some sightseeing in Bethlehem. Leila Sansour, chief executive of Open Bethlehem, explained some of the difficulties the people of Bethlehem faced because of the confiscation of land, pass roads and Israel’s Security Wall.

Tourism, once the main source of income is no longer a viable business there, she said. “The hotels and shops are empty. The economy is completely devastated in Bethlehem. This was once a dynamic city but now is becoming a ghost town.” We met a number of people after leaving the cultural center who echoed these points, including the mayor of Beit Sahour, one of the three Municipalities in Bethlehem. We had meeting after meeting with people all of whom desperately wanted an end to the conflict. In one refugee camp we saw people who lived in wretched circumstances for generations. We had lunch in a restaurant overlooking the grotesque huge separation wall that Our last meeting in Bethlehem was with the Mayor of Bethlehem, Dr. Victor Batarseh.

“Since the Hamas victory in the last election we’ve experienced a complete boycott from all the world,” he said. “We have not received the income from the taxes collected in Israel or from donating agencies. Our small city cannot move. I hope the world will not boycott the new government.” A question an answer session with MEPI participants followed. Of great note was the fact that this meeting took place right next to the towering wall that surrounds Bethlehem. The participants all felt the ominouspresence of the monstrous wall, and for a brief moment, couldexperience the same feelings of suffocation that the local people feel day to day. The group then participated in a conference in Tel Aviv to hear a range of Israeli opinions, visit the Governor of Ramallah, Ramallah Hospital and the Israeli Knesset.

Perceptions of the Prospects for Peace for Israel

Four main speakers spoke at the conference, all with great authority and conviction. The participants appreciated the range of views presented during the day. There was a good opportunity for discussion of the issues. There were roundtable discussions during the conference to maximise the chance for exchange of views. The speakers were Dr. Muli Peleg, Dr. Jonathan Spyer, Lord Tarsem King and Carolyn Tal. 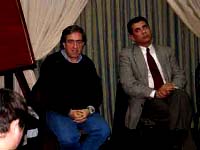 Dr. Muli Peleg, Professor of International Relations in Tel Aviv University as well as being the Co-Chairman of One Voice Israel Palestine, with great oratorical skills presented the view 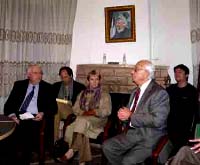 of much of the peace movement in Israel. He spoke of how the conflict was not that of Jews and Muslims, but that of moderates who want peace, and extremists, whose cause is flamed by war. These people straddle the stereotypical divisions that we speak of. From a completely different perspective, the speech of Dr Jonathan Spyer portrayed a disillusioned world after the failure of a false dawn of the optimistic era of the 1990’s. The fall of the Soviet Union left the region in a prime state to reach a solution, with the Israeli economy buoyant as well. However, times have changed, and in Dr. Spyer’s view, the current Palestinian leadership have very little vision for two peaceful, coexisting states.

There were many questions after both presentations especially from the political scientists among the participants.

Carolyn Tal, of the Israeli Citizen’s Action Network (ICAN), spoke of the media’s propaganda against Israeli actions, dispelling the myths and talking of the realities, especially of the views of the Israeli people. Lord Tarsem King of West Bromwich, of British Parliament, spoke of how this was his first visit to the region and, despite the tumultuous time, he learnt much of the realities of the region and enjoyed the learning curve.

In the evening there was a talk by the Bereaved Family Forum. Rami Elhanan and Dr Omar Al-Alool spoke to the group in one of the most heart-rending accounts of the consequences of the war on family life. One of the participants who had been many times to the region and felt depressed about the chances of peaceful resolution thought that this was one of the most positive developments in recent years.