Three Faiths, Two Communities and a need for Reconciliation in the Middle East

Following a Global Peace Festival held throughout the previous day at Imperial College in London, a meeting in the House of Commons discussed the Middle East Peace Initiative, a major project of the Universal Peace Federation. It was chaired by Dave Anderson MP, who had recently returned from a fact-finding tour of the region and met with local politicians and religious leaders. 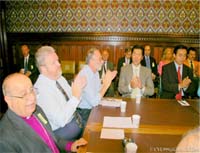 Bishop Riah Abu El-Assal, former Anglican Bishop of Jerusalem, presented a speech entitled, ‘What are the steps towards confidence building required for the establishment of good relations that did exist in the past between the two communities of Israelis and Palestinians?’ The Bishop has a reputation for being a forthright defender of the rights of the Palestinian people. However, he merged such concerns with universal values that included the need for the peace and security of the Israeli people. He recounted a meeting he had held with former UK Prime Minister Tony Blair where he had said, “When peace comes to Jerusalem, it will come to the whole world.”

John Levy of the ‘Friends of Israel Education Trust’ spoke on the topic of 'The Israeli perspective on Middle East peace-making' and gave a strong defence of the right for Israel's historical ownership and its current right to exist in internationally recognised borders. He spoke of Israeli fears of terrorism and for its security in a small land surrounded by huge Arab populations. The fears of a people persecuted throughout history featured strongly in his presentation.

After a question and answer session Dave Anderson MP, as chair, mentioned the role of the Israeli Labour Movement known as the Histadut which was performing a positive role in the search for peace by promoting the rights of Palestinian workers who work in Israel and lobbying the Government for preferential treatment to be given to Palestinian workers over those from other nations.

Dr. Hyun Jin Preston Moon, Chairman of the Middle East Peace Initiative, pointed out that even his own life had been one of persecution and bitterness that was nothing to do with him but the family into which he had been born. He said he could have had the right to harbour great anger but had decided to let it go.

“The Israeli - Palestinian conflict has a cycle of violence that will never stop because there are crimes committed on both sides. The practice of true love and one family under God is the only way to resolve the conflicts of the world.

We only talk of peace in terms of what we have and what we don't have. Or in terms of justice, both sides need to find within their hearts the means to forgive and to love. That is the root upon which peace can be built. And that is the basis upon which we created the Universal Peace Federation with the banner of ‘One Family under God’ to live for the sake of others. Religious leaders are more important than politicians in these conflict situations as they are the only ones who can present out-of-the-box solutions.” At that juncture he turned to Dave Anderson MP and said, “Excepting the politician now present because you are a politician of another ilk!”

He continued, “Religious leaders are coming to a fore; I have tremendous hope in them. I believe that the way of peace is to first go to the religious leaders as they are the ones that bring their communities together through the synagogues, the churches and mosques. They are the best allies to diffuse the anger and the hatred, and if we are able to bring them together under one spirit and under one banner of peace, then I'm sure we can build the foundation for the politicians to work out the rest. This is the work of the Universal Peace Federation.'

The meeting ended with a singing of ‘Happy birthday to you’ and  ' For he's a jolly good fellow' for John Levy who had given up time on his 60th birthday to speak at this event. It was a good note on which to conclude the meeting.