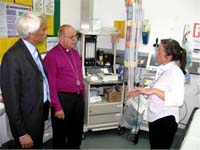 Former Anglican Bishop of Jerusalem, Bishop Riah Abu El-Assal, who is a founding patron of a collaborative Israeli and Palestinian health care project known as ‘Saving Lives’ today visited Birmingham at the invitation of Dr Peter Patel who chairs the project. He was accompanied by the Head of Policy for Conflict Resolution of Human City Institute, Ingrid Stellmacher, and Robin Marsh of the Universal Peace Federation’s Middle East Peace Initiative. 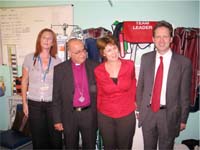 Selly Oak Hospital made a stunning contrast to any of the health facilities of the West Bank. With more that a thousand beds, five thousand staff and state of the art facilities and supplies that cater for some eighty thousand patients a year, Doctor Bernie Gallagher compared the situation of a major hospital in Birmingham to the reality of a hospital in the West Bank or Gaza.

At an evening reception and dinner Dr. Peter Patel gave an introduction to the work of Saving Lives and the development of the Holy Land Medical Project. Bishop Riah emphasised the way in which any conflict in the Middle East tended to have a knock-on effect throughout the world and Ingrid Stellmacher explained her hope for conflict resolution through the joint effort of Israeli and Palestinian doctors involved in the project. Robin Marsh gave an account of his experience gained through Middle East Peace Initiative fact-finding visits to Palestine and Israel. The evening was also attended by the Indian Consul General, Mr. N. P. Sharma and representatives of Saving Lives including some of the medical staff who had worked on a parallel project between conflicting communities in India. 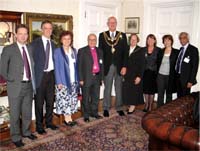 Lord Mayor’s Parlour
(An appointment was kept with Cllr. Randal Brew OBE, the Lord Mayor of Birmingham, and the Lady Mayoress)

The Holy Land Medical Project is a partnership between Saving Lives and the Universal Peace Federation’s Middle East Peace Initiative. It is following a successful model of collaborative health care in parts of India that furthered dialogue and reconciliation between two communities in conflict. It is intended to establish a Board of Trustees drawn from leaders across the three faiths.  Israeli and Palestinian doctors will be able to work together with business managers from both communities to oversee medical training courses applicable for health centres. Two doctors from Birmingham’s Children’s Hospital are already planning to visit the Caritas Baby Hospital in Bethlehem within the next couple of months.