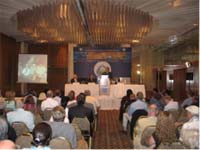 Knesset member General Dani Yatom spoke of the need for peace and the efforts that should be made to achieve that objective. Whilst emphasising that Israel would continue to maintain the best armed forces in the region to act as as a deterent to any future conflict, he favoured the resumption of talks with Syrian President Bashir Asaad and raising the standard of living for Palestinian people on the West Bank. He would also like to see an interim agreement with the Palestinian Authority which would allow them to reform their governmental institutions prior to any final status agreement.

Dr. Shlomo Ben Ami, former Foreign Affairs Minister as well as being a campaigner for peace described how his Toledo Peace Centre had part-sponsored the Madrid II talks in January. A former Director General of the Israel Ministry of Foreign Affairs, Alon Liel, then outlined the Track II diplomacy that he had pioneered with Ibrahim Soleiman to promote peace with Syria.

Channel 10 News Commentator, Zvi Yehezkeli, is a celebrity who relates to his viewing audience in such a way as to allow Israelis to realise that at the end of the day Arab Palestinians are human beings with with similar concerns to theirs. He speaks fluent Arabic and seeks to breakdown barriers between the two communities. Another TV Commentator Rafiq Halebi spoke of the need for equal human rights within Israel and emphasized that there must be compromise that ends the occupation.

Ms. Shapira Avital, Foreign Relations Officer of the Israeli Trade Union Movement, known as the Histradut, explained about relations between the Israeli and Palestinian Labour Movements. She described how the Israel Labour Movement’s attempt to break down barriers between the two communities had suddenly gone into decline after the start of the second Intifada in September 2000 but said that they had now started improving following a recent meeting held in Cyprus between both Labour Movements. The Israeli Trade Union Movement is pressing for preference to be given to Palestinian workers over workers from other nations for any work opportunities in Israel.