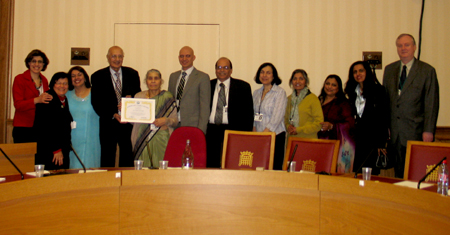 UN Day of Family commemoration in the House of Lords on May 15th commenced with welcoming remarks from Lord King of West Bromwich. He began the session by talking about the difficulties of family life in modern day society. He praised the worth of some of the families in the room.

Sheridan Mangal  'Family is a unit where we learn morals and take responsibility for your decisions. It is a place of preparation for dealing with the wider society.'

Rioch Edwards-Brown and Ian Brown shared some of the trials they had had to overcome in their married life. These trials had made them closer and stronger as a result.

The discussion that followed covered many topics including the role of schools in the raising of children, whether religion is useful or not in family life and gender equality issues and the family.