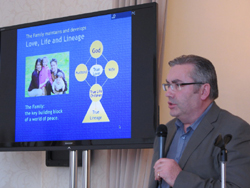 Mr. Edward Hartley, then took on the role of a speaker and delivered a short talk on “A History of Marriage and the Purpose of Marriage” (see attached speech notes), also using some quotes from the recently established Marriage Foundation. He was able to trace views on man/woman relationships as a couple, from the first ones living perhaps 200,000 years ago, over what was written about marriage in ancient Hindu texts 10,000 years ago, what the Jews were thinking 3,500 years ago, and then later the ancient Greeks, Christians and Muslims, right through to modern day definitions. The point is that marriage is an ancient tradition involving a relationship between a man and a woman. It is not appropriate to use it for anything else.

Dr. David Hanna, UK and European Education Director for the Universal Peace Federation and FFWPU then gave a fascinating talk on The Centrality of Marriage

A recently made video was playing in the room as people gathered designed to give a very short overview of the vast range of activities of the Universal Peace Federation worldwide. This was followed by a PowerPoint presentation slowly changing from slide to slide showing pictures of a previous year’s series of celebrations of the UN International Day of Families by UPF chapters in many countries of the world

The meeting was then opened to the floor where members of the audience had an opportunity to make a contribution. The very topical question was raised about whether UPF worldwide takes an official position on homosexuals marrying. The MC honestly replied that he had never seen a specific statement issued by UPF on this but that one thing is very clear:

the Universal Peace Federation worldwide strongly promotes  strong healthy marriages (between men and women) as a lifestyle choice which offer major advantages for the couple and their children (see attached documents used as hand outs at the event).

However, the Universal Peace Federation does not, at the same time, campaign against other lifestyle choices – it respects an individual’s right to choose and expects others to do the same!

“we are pro-marriage; we are not against anything - except marriage breakdown”.

A few other minor points were discussed and the MC then finished the event by highlighting some upcoming local and national UPF events such as:

B) The UK HQ UN Africa Day 2012 celebration on Wednesday, 23 May 2012 at the
House of Lords,  Committee Room 4A, hosted by Lord King of West Bromwich

He also reported that UPF Bromley will be launching a marriage course at Livingstone House from September for all comers, itself a major contribution to supporting and enriching marriages!

As the weather improves UPF Bromley will begin to hold informal get togethers with Ambassadors for Peace and others outside in the gardens.

The next scheduled UPF event in Bromley will be in September to commemorate the UN Day of Peace – details to be published later.

Many thanks to all who made the event a success.

1.1 Men and women probably living together, also raising family, for the last 200,000 years

1.2 Formalisation of the M/W relationship known for maybe 10,000 years or so - one of the oldest religions Hinduism sees marriage as a sacred duty that entails both religious and social obligations. Ancient Hindu literature in Sanskrit gives many different types of marriages and their categorization

1.3 Judaism, dating back 3.500 years or more, sees marriage as a contractual bond commanded by God in which a man and a woman come together to create a relationship in which God is directly involved. The main focus centres around the relationship between the husband and wife. Kabbalistically marriage is understood to mean that the husband and wife are merging together into a single soul. This is why a man is considered "incomplete" if he is not married, as his soul is only one part of a larger whole that remains to be unified (a familiar idea for Unificationists)

1.4 In Ancient Greece no specific civil ceremony was required for the creation of a marriage - only mutual agreement and the fact that the couple must regard each other as husband and wife accordingly

1.5 In Christianity from the early Christian era (30 to 325 CE), marriage was thought of as primarily a private matter, with no uniform religious or other ceremony being required. However, Bishop Ignatius of Antioch writing around 110 to bishop Polycarp of Smyrna exhorts, "[I]t becomes both men and women who marry, to form their union with the approval of the bishop, that their marriage may be according to God, and not after their own lust.

1.6 In Islam human beings are considered as a special act of creation, a unique life form created by Allah in a special way. The Quran does make it clear that a "mate" was created with Adam, from the same nature and soul. "It is He Who created you from a single person, and made his mate of like nature, in order that he might dwell with her in love" (7:189)

1.7 In contemporary English common law a marriage is a voluntary contract by a man and a woman, in which by agreement they choose to become husband and wife

According to the founder of the Universal Peace Federation:

We should sing about the supreme sacredness of marriage. Married life is the path along which a man and a woman can love each other. Through their unity they come to resemble God Himself. A man and a woman must become one in order to resemble God, who created them in His image. Only then will God dwell with them.

What is marriage? Why is it important? Marriage is a path for finding love. It is a path to love and a path to creating life. It is a path for the life of a man and a woman to become one. In marriage, the lineage of the man and the woman becomes mixed. History manifests through marriage; a nation emerges and the ideal world begins.

2 The Purpose of Marriage

2.1 People marry for many reasons. These might include: arranged marriages, family obligations, the legal establishment of a nuclear family unit, the legal protection of children and public declaration of commitment

2.2 A union between a man and a woman such that children born to the woman are the recognized legitimate offspring of both partners

2.3 Giving a husband/wife or his/her family control over a spouse's sexual services, labour, and property

2.4 Establishing the second legal guardian of a parent's child

2.5 Giving a husband/wife responsibility for a spouse's debts

2.6 Giving a husband/wife control over his/her spouse's affairs when the spouse is incapacitated

2.7 From Judaism: that the husband and wife can merge together into a single soul.

2.8 From SMM: In order to learn to love the world and to gain the qualification to love all people. To join together the man’s and woman’s worlds of heart and to perfect the love of each of them. So to be married is to declare that you will show proof of this love.

There is no better institution for achieving stable relationships between men and women who live in a couple relationship than Marriage.

There is no better institution for bringing children into the world who will be happy and make a positive peaceful contribution to the society they live in than a stable Marriage.

There are those who wish to challenge or weaken the status of Marriage; they should resisted!

The Universal Peace Federation supports the Coalition for Marriage and the newly created Marriage Foundation in the UK.