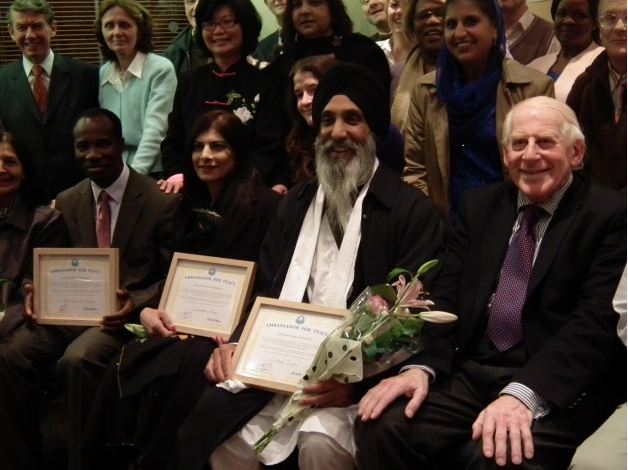 Oliver Lane, UPF secretary in Scotland, went on to introduce representatives from four faiths, all of them Ambassadors for Peace, who spoke of the values of traditional marriage. Dr. Satwant Multani, Sikh executive member of the Scottish Interfaith Council, emphasised the generosity of families and the search among Sikhs of a spouse from a distance, avoiding close consanguinity. Mrs. Nila Joshi spoke of arranged marriages in Hinduism and the fidelity of couples that goes beyond the grave. She and her husband Mike are leading figures of the Hindu Association of Edinburgh and manage the Hindu temple in Leith. Mrs. Shazia Nadeem, from the Falkirk and Central Scotland Muslim community, outlined the Islamic principles of marriage. Rev. Brian Cooper, Interfaith Secretary of the World Disarmament Campaign, presented the Christian view, and deplored anomalies in the present social security and taxation system that seem to favour single parent families over traditional families.

A short film was shown of the life of Rev. Sun Myung Moon, dealing with his early life in Korea and the development of his world-wide mission. Hamish Robertson, UPF coordinator in Scotland, gave a brief explanation of Rev. Moon’s ideas concerning the creation of mankind, the divine purpose of marriage, and the confused history arising from the human fall.

The panel of speakers then faced questions from the audience. Sex education in schools was a special preoccupation. The general feeling was that sex education, in its present secular form, has little moral basis, does not encourage the spiritual and natural dimensions of a healthy marriage relationship, and is likely to bring even greater chaos into an already troubled society. The recent riots in London, with their hooliganism and destructiveness, are symptomatic of a generation brought up in a society where traditional marriage is being side-lined and deviant relationships promoted.

The meeting concluded with the appointment of three new Ambassadors for Peace: Wege Singh, secretary of the Guru Nanak Gurdwara in Edinburgh; Yasmeen Khan, senior policy officer with regard to race relations and problems of deprivation in the Strathclyde area; and Samuel Yerokun, Pentecostal pastor in Paisley.
The multiracial component is more and more evident in present-day Scotland, specially in the Central Belt, and our meeting was no exception. John Knox, the 16th century Scottish reformer, whose house lies no more than a hundred yards down the street, would have been amazed. However, as an educator and a man of God, he would have strongly approved of the meeting’s aspiration for a new moral education and a greater unity of approach among the world faiths.