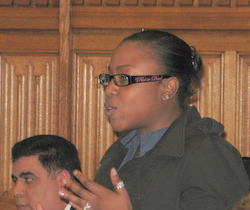 One Monday night there was a look at the importance of family background in the prevention of gangs and gang related crimes. A powerful testimony was recounted by Narraser Rochelle Gordon who has a wide experience of strong family roots through her grandparents, of dysfunctional parental role models, of gang culture and the tragedy of gun and knife violence. She joined STOP, Solve This Ongoing Problem, a group that encourages gang members to leave gangs and a way of violence. It has been her passion to lead her peers to avoid the tragedy that she has seen too often. Other testimonies of gang membership followed by life changing experiences were given by Adam Nazar and Quince Garcia.

'I grew up in London with my grandparents. I had a silver spoon in my mouth. I was spoilt rotten. However, when I was in my teenage years I not only went off the rails I went right off the train tracks. I rebelled so badly that at one point I moved out of home and moved in with her biological father who was a gang member. I have made some pretty bad mistakes but that was one of the worst. It was considered my birthright to join the gang that he was part of.'

'In those days if I had an argument I would not just agree to disagree I would try to kill someone. I phoned one girl in college one night and threatened to murder her. She came in with a police escort. I put one girl in intensive care. She lost a pint and a half of blood. I had a criminal record as long as your arm. I regret those things but if i had not have done those things I would not do the things I am doing now. I began STOP in Bristol. I started my own film production company and I have become involved with ‘One Young World’. I ran for the local council and I came second but I am only 24. I have achieved so much in my life but it has come at a high cost. I am one of a triplet but I lost my two brothers. The brother that followed me was murdered by his best friend. I lost friends, cousins until I just had to say enough was just enough.'

'When I found out about the STOP campaign from Alex, who is not here today, I thought I have to bring this to Bristol. I am the perfect person to do this because I have lived this life. The young people that I am talking to understand that. They understand me and I understand them. That is why I am here today.'

'I live on my own now. My grandparents now live in Jamaica. I went back to college, got my A-levels and then went to university. When they came back to see me they were so happy to see that I had finished my degree and that I had got a first! I didn’t ask for any help. I just did it myself. They always said to me we planted that seed. They used to drum religion into my head and I would say, ‘Can we change the record please?’'

'I wrote a letter to them and said sorry and thank you for all they did. They planted that seed and then they continued to pray and believe in me. Their church also prayed for me. Without their prayer I would either be in prison or I would be dead. I am very thankful for their upbringing. Even though I went off the rails they still believed in me. I am very grateful for them planting that seed. They said that they are very proud of me! I never thought I would hear that.'