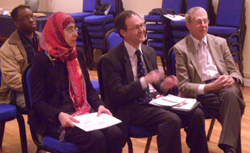 A powerful call was issued to protect our children from the prevalence of ever increasing sexualisation, through asserting our rights as parents and taking a stand against forces which aim to corrupt young and innocent minds. Speaking at a conference on "Defending Morality: Countering Secularism", held at the Peace Embassy, Thornton Heath, on 20 November, John O'Neill, coordinator of the Morality Forum, drew attention to parents' rights to view sex educational materials shown at schools and referred to existing legislation which mandates that marriage and moral values should be included as part of sex education. 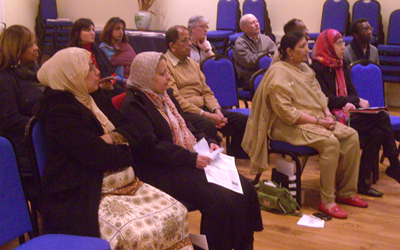 permissive sex, mentioning the need for proper counselling on the serious and damaging after effects of abortion to be made available to young girls and women contemplating terminating pregnancies.

In the second speaker presentation, Fouzia Razvi spoke eloquently on "Morality in Islam", outlining the basic tenets of being a good and moral Muslim emphasising qualities of humility, care and love for others, good neighbourliness and respect for elders. Citing the example of the trend for groups of young people to roam aimlessly around our streets, she mentioned the problem of imparting Islamic values to youngsters, and the need for young role models and purposeful activities to bring out better attitudes amoung young people.

Lance Gardiner, in the final presentation, addressed the rise of aggressive secularism which undermines the traditional moral frameworks underpinned by religious belief. Explaining that religion was losing its authority due to intolerance and extremism giving rise to conflicts among faiths, he asserted that people of all faiths must discover common ground, mutual respect for each other's teachings and universal spiritual values in order to present a coherent message to combat the rising tide of atheistic philosphies. 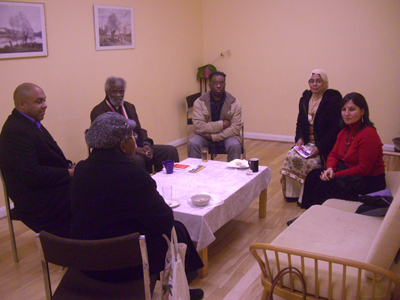 The conference was ably coordinated by Saleha Jaffer, who urged participants to work together on projects such as UPF's youth mentoring programme to engage young people to strive for sound morality and positive achievement in life. The partipants, who numbered nearly 30 altogether, were divided into 3 groups and entered into lively discussion on the themes presented, addressing a wide variety of moral issues as well as practical ideas such as media campaigns to bring such issues to the forefront. Everyone thoroughly enjoyed the opportunity to share and network over refreshments to conclude an stimulating and informative conference.