The Sheffield Universal Peace Federation (UPF) Branch was launched on November 26th 2017 by Peter Ljasevits. He had been praying about setting up an interfaith type, peace dialogue group in Sheffield for a long time, maybe years. Frustrated by the lack of activities he finally chose a date and just committed himself to the event and went for it!!!  (Photo Link )

It was held in the Hilton Hotel in down town Sheffield on Sunday 26th November from 11 am. It was a 5 hour event, with long breaks and food all included. Generally, it was an inspiration for all realizing that we too can make such a meeting for our friends and contacts too. In all there were 4 guests.  One guest was Live Israelah, who is Congolese and the wife of a Christian Pastor who is also an Ambassadors for Peace. 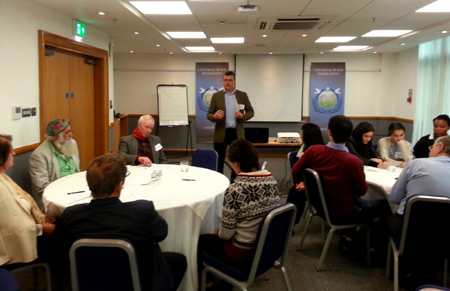 Another guest, Noah, is a member of a Sufi group. He is also a healing Acupuncturist. John Nottingham, a Councillor for a region of Sheffield, has a special concern about global warming. A Burmese lady, a friend of Maria, attended with her young daughter.

The event began by the introducing of UPF values and our culture, basically and what we stand for.  Then we had discussions in groups including guests who contributed a lot, as Peter chose two of them as chairpersons to organize each discussion.  That really worked well, as they had a lot to share about what the root problems of society really were. Peter wanted everyone to share what they are doing and give ideas and thoughts about how we might cooperate in future.

Dale Rose and Cllr. John Nottingham (photo left to right) who was a great chairman encouraging all to share opinions and their insights too.

Over lunch guests shared their passions about good governance and climate change in John’s case and Noah shared about the spiritual cause of physical sickness.  Our dear Sister Hyo Sung Ngama, in the afternoon gave a good talk/ testimony about growing up with UPF values and being raised by parents with such beliefs and the challenges as young person.

Later, Live gave a short introduction to her work as a Pastor's wife and Peace Ambassador. She was excited that UPF had begun activities locally, rather than only in London. At the end there was quite a buzz as we all said our good byes. We had all reached out to share our core values in discussion and yes, really enjoyed it too. 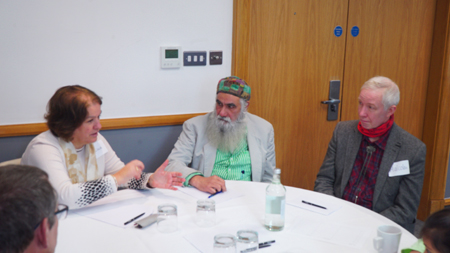 There was a general atmosphere where everyone could share their feelings thoughts and even worries about the future of humanity, young and old alike.