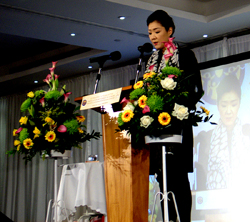 Today there will be a visit to the UK by Dr. Sun Jin Moon who is the Chairwoman of Universal Peace Federation (UPF) as well as the International President of the Family Federation for World Peace and Unification (FFWPU). She will be commemorating 50 years of the Unification Movement in Europe as part of a week long series of events in Vienna, Frankfurt and London. The Korean Little Angels Children's Folk Ballet will perform in the morning and this evening as part of these celebrations.

Dr Moon was appointed as the Chair of UPF International as well as International President of FFWPU in March 2015. It will be the first time she has visited the UK in these capacities. 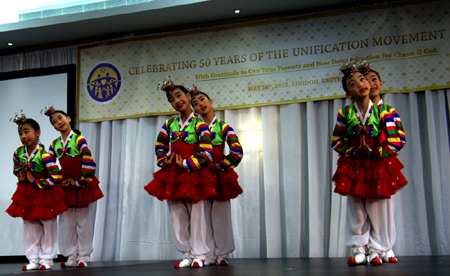 She will be seeking to inspire the membership and invited guests to further the vision of her parents, the late Rev Dr Sun Myung Moon and Dr Hak Ja Han-Moon, Co Founders of both organisations. Dr Hak Ja Han-Moon spoke in Vienna last Sunday on a similar theme of fulfilling Europe's Christian heritage to establish a world of peace.

Mr Keith Best will give some congratulatory remarks preceding Dr Sun Jin Moon. He is a former Member of Parliament, a former CEO of several prominent NGOs and a UPF Director. He will comment that 'together with her mother, Dr Sun Jin Moon, represents a new stage of female leadership predicted by the Father Moon in the last decades of his life.'

Dr Hak Ja Han Moon, co-founder of UPF, spoke at the United Nations in Vienna last Monday to commemorate the 70 years since the end of World War II. She was accompanied by the Little Angels in a conference that considered the divisions that remain, unresolved, on the Korean peninsula.

Dr Sun Jin Moon's speech will seek to encourage the audience to make a difference to the society around them by applying the principles that are fundamental to the Unification Movement and that were repeatedly emphasised by Rev and Mrs Moon, to put God first in our life and serve humanity while uniting mind and body/word and deed in the process.

She will emphasise that she does not feel qualified herself to be in this position but is only accepting her roles to bring comfort to her mother who has to face many challenges alone. She will ask, quoting her father, 'Who here has united mind and body perfectly?'. Then say, 'None of us, me included, can claim perfect mind and body unity. My mother has accompanied my father for 52 years in a schedule that everyone has found challenging and exhausting after only a few days. To maintain this while having 14 children is real mind body unity!' 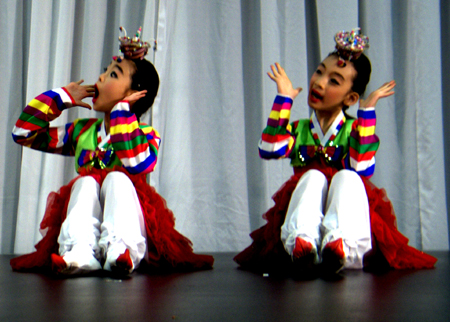 Dr Sun Jin Moon oversees a wide range of philanthropic, humanitarian, civil society and business initiatives. She is Chair of the Pacific Rim Education Foundation and the Seil Tour Company, and serves on the Board of Directors of The Washington Times Foundation and the Yongpyong Ski Resort in Pyongchang,

The Little Angels will perform in the morning in support of Dr Sun Jin Moon's speech. In the evening they will charm a gathered audience in Hackney Empire Theatre. They are known for their activities that have promoted traditional, peaceful, 5000 year Korean culture around the world. The Little Angels were founded by Rev Moon in 1962 as cultural Ambassadors for Korea to the world. There is a link to a recent article about the Little Angels here.