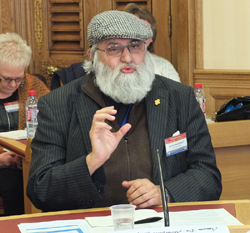 Bismillah Hir Rahma Nir Rahim (I begin with name of God the Most Kind the Most Merciful). I greet you with the greetings of Islam (Assalamu Alaykum wa Rahmatullah wa Barakathu (May God’s blessing and peace be with us all.)

I am honoured, and deeply humbled, to the Universal Peace Federation (UPF) for inviting me on this historic occasion of Human Rights Day 2011. From the very outset I wish to give my personal and, on behalf of the Muslim Council of Britain, congratulations to your organization for the very valuable work you have done which has been very much recognised by international agencies. I have privileged to work closely on previous years and found Rights and Humanity work with faith communities very useful. 10th December date is also a very special date in the international calendar. This is another anniversary of the United Nation's Declaration of Human Rights when in 1948 the world community endorsed a remarkable document.

Let me say a few words about Human Rights and Islam before I turn to the topic of religious extremism and fanaticism. I must make it clear that to the best of my knowledge, the modern world had no concept of human rights before the seventh century and it was not until the 18th century that the concept took any practical meaning in the constitutions of a number of countries. From the Islamic point of view God granted rights to all humans, which cannot be taken away by any human institutions. Islam gave to mankind two types ideal code of rights fifteen hundred years ago: 1. Haqooq Allah which means rights and obligations towards the creator and 2. Haqooq an-Nas or Haqooq al-Ibad which means human rights. The first constitutes recognition of duties by human beings to be righteous and act with purity of mind and body in worship and obedience to the will of creator. The second is based upon social contract to do good deeds for common good with dignity and respect for all human beings while appreciating diversity and valuing the difference. This is the obligation of the society for the best relationship between man to man. Every right have some duties and responsibilities, which must be strictly observed, in letter and in spirit.

In Solidarity with Iraqi Christians

We the participants, Muslims, Christians and Jews, from different denominations, meet today in London, to express our solidarity with and support for our brothers and sisters of the Iraqi Christian community who have been subjected to terrorist attacks, in particular the congregation of ‘Our Lady of Salvation’ in Baghdad. We emphasise the shared cultural heritage of Muslims and Christians in Iraq, as well as other faiths and denominations, as they have lived together peacefully for generations not only in Iraq but also in other Arab countries and elsewhere. We stand shoulder to shoulder with Iraqi Christians to confront the terror and fear that this important part of Iraqi society now faces, emphasising that these terrorist attacks will not succeed in dividing us and destroying the great values that we share and out long history of peaceful coexistence.

Comments from the audience about the inter-religious council were varied and informed.

1)      That we should have a Petition at each of the consultations and promote an Early Day Motion among MPs.

2)      How do we prevent religious leaders aggrandising against states or states imposing laws on religions?