Religion Can of Course Help
Healing the Wounds of Conflict
Dr. Mozammel Haque
Religion is peace and religion teaches how to live a disciplined peaceful brotherly life. It can not only play but its aim and purpose is to guide humankind to lead a peaceful disciplined life and keep away people from conflict, violence, and disorder. There is no doubt sometimes some people used religion to create disturbance, disorder and conflict. (Original Article Link )
But religion prepares the psychological state of mind to cope with different situations. Islam prepares the common bond of humanity by establishing their common origin and universal brotherhood. This universal brotherhood emanates from the following basic concepts and is demonstrated in a most authentic and brilliant manner here on this occasion:
Adam is the first man from whom all human beings have sprung up;
Abraham is the father of monotheistic religion;
Acceptance of all prophets as prophets of God;
Belief in all revealed books of Allah. 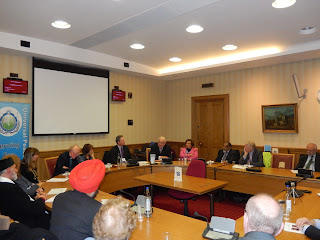 Thus, this acceptance of Abraham as the patriarch of the concept of Tawheed and recognition of the continuity of Prophethood from Prophet Adam to the Last Prophet Muhammad (peace be upon him) and having faith in all revealed books keeps up a chain of faith known as Islam throughout the world. This binds the whole humankind into a bond of brotherhood whose genealogical father is Adam and the spiritual father Abraham. Thus Muslims believe in the continuation of the human race on earth. There are no conflicts and controversies in the monotheistic religion decreed by God. All Muslims (those who consciously and willingly surrender to the Will of the Creator) belong to this Ummah and therefore constitute a fraternity of faith.
Lord Eames mentioned brotherhood. But it is known and we found conflicts were there in the past and still are around the world and people were victimised. Religion teaches forgiveness as mentioned by Dr. Marcus Braybrooke but we have to remember that religion also teaches, at the same time, not to cause injustice.
We have noticed in the past the main cause of conflict is not religion, but injustice and this injustice was created by the wrong policy of some policy makers who are in power. Dr. Marcus has mentioned different stages of forgiveness. When injustice is caused to some people, some communities or some countries, they became victims and some of the victims of oppression and injustice, may be they are very minimal, may be 1 in 1000, took to violence; though religion does not approve violence, extremism or disorder; though no sensible peace-loving people will support that; but we noticed it is happening.
Healing the Wounds of Conflict –
How Can Religion Help?
Naturally, under this situation and circumstances, how can religion help? Becomes the topic of discussion and debate undertaken by the Universal Peace Federation in its event on 22 February 2016.
A meeting on “Healing the Wounds of Conflict – How Can Religion Help?” hosted by Lord Ahmed of Rotherham, was held at House of Lords Committee Room, on 22 February 2016. This meeting was organised by Universal Peace Federation (UPF) on the occasion of World Interfaith Harmony Week. In the event, people of so many different traditions communities religious groups faith groups gathered and represented which makes this meeting more important and more relevant.
The purpose of holding this meeting was, according to Universal Peace Federation, “While it is quick to destroy development and positive inter-community, inter-ethnic, inter-religious relationships the recovery from conflict requires a long period of healing. It is said that politicians can sign peace treaties but it is a role of religious leaders to encourage the healing and the reconciliation that makes that treaty long lasting and brings hope for future generations.”
“UPF has had a series of conferences chaired by Rev Dr Marcus Braybrooke on forgiveness and reconciliation. They have allowed us to consider the dynamics of forgiveness. Reconciliation is a wider process that brings together communities and individuals in mutual reflection and honest effort to build understanding and then trust that will underlie generations of future development,” said UPF.
Among the speakers, there was Rt. Rev. the Lord Eames OM, the Archbishop of Armagh and Primate of All Ireland (1986-2006), Rev. Dr. Marcus Braybrooke, Joint President of the World Congress of Faiths and Irris Singer. In the absence of Lord Ahmed, the event was chaired by Mr. Robin Marsh, Chairman of the Universal Peace Federation, London, United Kingdom. After the speeches, there was Q&A.
Rev.Dr. Marcus Braybrooke
Forgiveness
Rev. Dr. Marcus Braybrooke, Joint President of the World Congress of Faiths, started by explaining the importance of forgiveness in different Faiths. Dr. Marcus said, “We must forgive as the Jesus did.” He said, “In the same way, Muhammad (peace be upon him) when he returned victorious to Mecca showed a divine mercy. He called for the leaders of the Quraish and said to them, ‘This day, let no reproach be cast On you: Allah will forgive you, And He is the Most Merciful Of those who show mercy. (Al-Qur’an 12:92)
He also mentioned, “The Buddha said, “hatreds never cease through hatred in this world; through love alone they cease.”
But Dr. Marcus said, “If it is easy to talk about forgiveness, I know how difficult it is even in ordinary life. I cannot begin to imagine how difficult it is for those whose loved ones have been killed or tortured, but the only hope for healing and lasting peace is for us to mirror the forgiveness of God. As Desmond Tutu said, “There is no future without forgiveness.’” 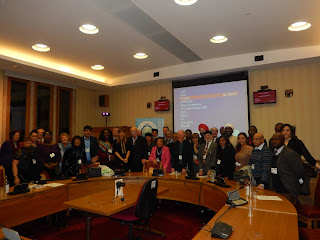