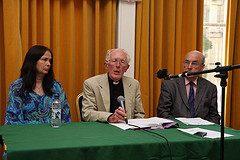 A Universal Peace Federation (UPF) event, 'Forgiveness for the Future', was held on Saturday 8th September in London UPF HQ. This is part of a series of conferences over the last four years. The first session was chaired by Rev. Dr. Marcus Braybrooke who began with a minutes silence for UPF Founder, Rev Sun Myung Moon. He read some words of Father Moon on forgiveness. Jo Berry gave a personal testimony of working for the greater good with Patrick McGee who was responsible for the death of her father during the Brighton Bombing. Brian Frost described the significance of the symbolic gesture, the expressions of regret and the care of Her Majesty Queen Elizabeth II that comforted the hearts of the Irish people during her visit to Dublin earlier this year. (Photo Link)

Marina Cantacuzino, chairing the second session, described her work with 'The Forgiveness Project' exploring “the complexities of forgiveness”. She stated 'the more I work in this area the more I realise I know very little'. She introduced Anthony Grey who was an international hostage and author of 'Handbook of a Hostage' who offered 'Lessons learnt working for “Planet Forgiveness”'.

There was a special feature on the Middle East with a trailer of the documentary called, 'Within the Eye of the Storm' that will be released on the 21st of September by Firefly Productions. UPF will include the documentary in its Oslo European Leadership Conference (ELC) programme in the Norwegian Parliament. Israeli singer, Tally Koren,  followed the trailer singing “Two Kisses” a song written by Joel Rockman, composed and sung in memory of all the victims of the Arab - Israeli conflict. This was a taster for a concert in November including Tally Koren and a Palestinian singer.

Mama Charlotte Simon from Congo discussed the progress of reconciliation between a group of Congolese and Rwandan women that have followed her earlier presentations at other events at UN International Womens Day and the June Human Rights ELC in London.

Jo Berry shared, 'I miss my Dad hugely and I would not wish it on anyone but this process has taught me so much about how peace could be accomplished. We should not judge anyone or any part of any group. I'm beginning to realise that no matter which side of the conflict you're on, had we all lived each other's lives, we could all have done what the other did.'

Marina Cantacuzino stated that forgiveness is an exploration not an conclusion. The more I hear the less I realise I know. Is forgiveness conditional on remorse? Many believe that my forgiveness is my release and it does not have to do anything with the perpetrator. She also explained that there are health benefits to forgiveness becuase of the release of mental tension.

Sukhbir Singh, representing Bhai Sahib Bhai Mohinder Singh, from the Guru Nanak Nishkam Sewak Jatha, explained the remarkable efforts undergone for community forgiveness and reconciliation between the Sikh and Hindu communities where 150 largely Sikh volunteers served Languor (holy food) for a large Hindu religious gathering. In 1984 many Sikhs were killed in India in an period of time that SIkh's feel was never fairly accounted for or investigated. That Sikhs were to serve a Hindu religious gathering in August of 2001 of 10,000 people for more than a week was a large and controversial offering. The result of that offering to serve has been the closeness of the two communities, especially in Birmingham.

Jack Corley, Chairman of UPF - UK, shared an experience with Father Moon in that very room, roughly 34 years before, where the members had been happy at the fall from power of a persecutor of Father Moon and the Unification Movement, but he had admonished them asking them who had prayed for the persecutor given that he also is a child of God.